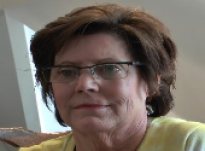 Age at interview: 61
Brief Outline: Margo donated a kidney to her younger brother in 1997, when she was 48 and they were both living in America. The surgery went smoothly and, over thirteen years on, both she and her brother are well.
Background: Margo is a married volunteer and has two adult children. Ethnic background/nationality' White American.

Margo donated a kidney to her younger brother in 1997, when she was 48 and they were both living in America. Her brother was diagnosed with kidney failure and was on dialysis for five years in total. Doctors suggested the possibility of having a transplant. Margo was one of four children and had the same blood type as her brother. She went ahead with tests but these showed she was not eligible because she rarely drank water and had a poor diet. Margo started eating healthily and drinking lots of water and, a year later, was retested.  This time she was eligible.

Margo said her biggest fear was that her kidney would reject. The surgery went smoothly and, over thirteen years on, both she and her brother are well. Margo said she’d been ‘thrilled with the whole process... and there hasn’t been any downsides.’ She and her brother have always been very close. Since his transplant, he has visited her in the UK, something he would never have done before the operation.

Margo said her brother felt well almost immediately after the surgery and was only in hospital for a few days. She was in hospital for about three or four days. Back at home, she recovered well and was soon able to do everything she’d done before, without needing help or to be cared for. She was advised to take six weeks to recover completely. Over thirteen years on Margo is fit and well, and encourages other people to consider living kidney donation to help improve the quality of life of another person. She said donating a kidney to her brother also improved her life and that, since then, she has had a healthier diet herself.

Margo now has annual follow-up appointments and is keen to raise awareness of organ donation and living kidney donation. She felt that more awareness of these topics was important, starting with education in schools.

When Margo found out she couldnt donate a kidney to her brother, she started drinking lots of...

I am one of four children. He’s [recipient] my youngest brother, but he and I are the same blood type. So I went to be tested and, at that point, they tested me and they rejected me. They said that I didn’t, well I didn’t eat well enough and I never had a glass of water in my life.

Margos brother takes a lot of medication but, over thirteen years on, is well and happy. He has...

I have a picture somewhere and, if I could find it, I would show it to you. But it’s me in the hospital [drained expression] and him, hey [upbeat expression], you know. So it was immediate for him. Almost immediate that he was feeling fabulous. And now there’s the anti-rejection drugs, which are hard on your body, his body. I do believe they take their toll. But you certainly wouldn’t trade what they do to him to not having a kidney. You’d rather have the kidney, be free of the tubes and dialysis and all that. I think that, yes, and as a family you have to do it, you do, you have to.


So it all worked out for the best. It took perfectly and its thirteen years later and he is very healthy and very happy. And even came to England to see me. Because he wasn’t leaving the country before that; he’s always been very nervous about leaving the country because of infections and drugs and stuff, so, he just no, so it’s been a really wonderful experience for me, and my family.

Margo advises others to think about organ donation. She feels healthier than before donating...

Just do it, do it. I’ve even contacted our doctors and said that we knew someone that needed a part of a liver, and I said, I’m available. Do you want my liver too? Fine. You know, a piece of it. And they laughed because I know them well now after all this stuff. But no, it really did not and has not affected me one bit. It’s improved my life made me be healthier about myself. Not out of fear, just out of, “Wow, you need to start thinking about things like that.”

Margo had open surgery in 1997. She praised the care she and her brother had received. The...

We had very good care. We couldn’t have been better taken care of I don’t think. I think it was just, you’re not in the hospital very long either. You’re just kind of there, I think I was there two or three days. The only thing that happened to me is they had the morphine drip for pain, and that made me sick. So, “Get me off that, I don’t need it.” You know so, and even then I thought everything went really smoothly.

So you were in hospital for two or three days?

I think three; maybe I was in four, maybe four. He was in, my brother was only in two I think. They sent him home because he was up dancing.

Compared to me. But then he has a very low scar and I have a very long scar. And now they do it, I hear, laparoscopically. They can take it through your navel which they didn’t do then.

In 1997, when Margo was living in America, she donated one her kidneys to her younger brother,...

Oh excuse me, the eye infection cleared up and three days later he was in the hospital. I went to visit him and he was yellow. His skin colour was yellow, his eyes were yellow. Everything was yellow. I thought, “Oh my Lord, what’s happening?”

So with that they found out that he needed dialysis. And he was on dialysis for five years, and it doesn’t work really well with him.

I’m one of four children and that particular brother and I had the same blood type. So therefore that would be the easiest. The others [siblings] couldn’t do it, and I’m O-positive anyway which means I’m the universal donor. No, it just, it was kind of a, “This is the way it is.” And I could have said no, I surely could have, but that never occurred to me to say no. It never occurred to me.