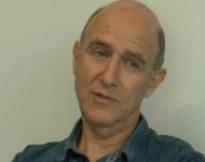 Professor Feder talks about the importance of doctors and other health professionals as a first port of call for women who are experiencing domestic abuse.

Show in context
SHOW TEXT VERSION
PRINT TRANSCRIPT
My name is Gene Feder, I’m a GP in Bristol and I lead a research group that has for the last more than ten years been investigating how best doctors, nurses and other healthcare professionals can respond to women who experience domestic violence. The reason I think this is a kind of crucial issue for doctors and other healthcare professionals is because there is a direct connection between the abuse that women experience and their health. That connection, it’s a nasty connection, it’s about increased problems with mental health so if you’ve been abused in your lifetime you have a much higher likelihood of depression, anxiety and post-traumatic stress disorder. It doesn’t stop with the impact on your mental health, if you experience domestic violence, it can also affect in the long-term your physical health, for instance gynaecological problems are much more common in women who’ve experienced domestic violence, particularly if they’ve experienced sexual abuse.

So an argument for why doctors and other health professionals need to pay attention is firstly because domestic violence impacts the health of their patients, but the second and I would say equally strong argument is: that’s what women who are experiencing domestic violence want. We know from research interviews, including some of the really eloquent interviews in Healthtalk, that women want to disclose and want to let someone know what’s happening but find it very difficult. And doctors are at the top of their list of professionals, particularly their GPs, that they could trust with this very difficult disclosure because, after all, saying to someone that you’re being abused by the person who is supposed to look after you and love you the most, is incredibly difficult.

One of the problems is that doctors themselves, at least historically, have not seen themselves as being in a position to receive that disclosure and to respond appropriately, and that’s changing. So one of the real messages of this Healthtalk module is that general practice particularly, the healthcare setting should be a place where women can disclose but we also know from some of the interviews that that’s not going to happen for most women spontaneously. It’s going to happen for most women if they’re asked by their doctor or by their nurse.

And now we have a training programme nationally to give doctors, nurses and other healthcare professionals the confidence, because it does take some confidence, to ask women if they are experiencing domestic violence. They won’t necessarily ask it with the term ‘domestic violence’, they may ask ‘are you having any problems at home?’ or ‘are you scared of anyone at home?’, ‘is anyone forcing you to do things at home that you don’t want to do?’ Those are the sort of questions that we’re now training doctors and nurses to ask and the goal is to, particularly in general practice, and GPs have the most contact with the population of any other healthcare professional, particularly in general practice, for that to become a safe place for women to disclose.

Now, if all the doctors were doing was making it a safe place and possible for women to disclose, there would be a problem because the question then would be well what does the doctor do next once a woman discloses, other than to be supportive and validate her experience. Well the crucial part that we’re doing in addition to that is linking doctors, and nurses, and other healthcare professionals to the very professional domestic violence services, unfortunately currently very threatened by cuts, but still very much out there within the UK. And in those services there are the professionals, called advocates or support workers, who have the skills to support women in making decisions about what they want to do next about their safety and, crucially, about their children, because the impact, for those women who have children, on their children, of domestic violence in the home is... can be devastating, and women who are experiencing domestic violence are concerned not just about their own safely but about the safety and the impact on their children.

Within these services, there is the expertise to provide that support. It doesn’t mean that if a woman discloses she should be asked by the GP ‘why don’t they leave?’ and she certainly won’t be asked that by the services that support her. The issue of leaving, as we know from some of the interviews on Healthtalk, is difficult and it may not be a solution for the woman, it may in fact be unsafe for her to leave in an un-planned way. That’s not the be-all and end-all of the support that healthcare professionals or the domestic violence services should give. The point is to start from where the woman is and look at what the woman wants and support her in doing that. And I’m convinced that’s what doctors, nurses and other healthcare professionals should do. And I know that that expertise and capacity exists within the domestic violence sector.
Previous Page
Next Page