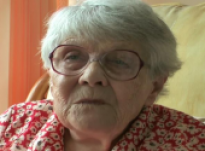 Age at interview: 92
Age at diagnosis: 90
Brief Outline: Gillian received a phone call one day but found she was unable to get to the phone to answer it because her legs were not working as they should. She was seen by a locum GP who didn't think it was a TIA/minor stroke, however later another doctor confirmed that it was likely to have been a mini stroke. She has had a further similar episode since then, which was also confirmed to be a mini stroke.
Background: Gillian is widowed and has a live in carer to help her with day to day activities. Ethnic background; White British.

Gillian was unable to get to the phone to answer it when it rang one day, because she found that she wasn’t able to move her legs in the normal way and during the rest of that day she felt a little out of sorts. That evening her carer rang the GP and an out- of- hours doctor called on her, who thought it was a urinary infection, although tests proved that not to be the case. The doctor felt that no further action was needed however Gillian insisted on having some follow up as she felt it was important to have a diagnosis and if necessary, treatment. She was referred to a clinic which she attended two weeks later, where blood tests and scans were undertaken and she was told she had had a mild stroke. Gillian was already taking medication for high blood pressure and was prescribed Aspirin, but later after a bout of anaemia she was taken off the aspirin. Physiotherapy was provided for a few weeks to help Gillian to regain her mobility. She is now much more mobile again, although is now more reliant on her walking frame than she had been prior to this episode.

Gillian experienced a second similar episode some time later, during which she again found walking difficult and the GP confirmed this as a second minor stroke, but the GP did not prescribe any further medication or advise any further action to be taken. Gillian has been in touch with the Stroke Association to find out more about the condition, and has tried to make some changes to her diet in response to the information that they provided about prevention of further strokes. Gillian feels that it is important that doctors and health professionals are able to give a patient a clear diagnosis so that people know where they stand and can have the best possible chance of treatment.

Gillian was seen by her doctor the day after the episode and she was given a non urgent...

Gillian was seen by her doctor the day after the episode and she was given a non urgent...

View topic summary
SHOW TEXT VERSION
PRINT TRANSCRIPT
Oh yes she came and we talked about it and she didn’t think I’d had a stroke. She thought I’d had a urinary infection. And they did all the tests for that, tested urine and the blood and that was that. So there wasn’t, it was quite normal, what I said myself, Well, they said no action, no further action needed to be taken. So I said, “It certainly does need to be taken because I need to have a diagnosis and treatment”.
Well then nothing else happened until I went to the hospital.
And so what period of time had gone, a couple of weeks did you say? Between the doctor and…
About a couple of weeks.

Gillians carer waited until the evening to call the GP.

Gillians carer waited until the evening to call the GP.

View topic summary
SHOW TEXT VERSION
PRINT TRANSCRIPT
I had been clearing up things in the lounge. We’d had, a priest was in that morning to celebrate Mass and things afterwards, things had to be put away. When I was putting things away, the telephone rang and I found I couldn’t get quick, I couldn’t get to it to answer it. And later on that day it does seem that I was sort of, something was slightly wrong, I didn’t really know what, but I wasn’t able to move around as I usually do. I had a carer here and she was concerned but we waited until the evening and then she called the doctor in. And she didn’t know what had happened. And the next day the doctor came again and maybe said I had had a slight stroke and he made an appointment for me to go to the hospital, which I did a week or two later.

Gillian has a blood test and her blood pressure checked now and again when the district nurse...

Gillian has a blood test and her blood pressure checked now and again when the district nurse...

View topic summary
SHOW TEXT VERSION
PRINT TRANSCRIPT
Are you still being monitored at all? You know, does the doctor come and check you over …
Well…
… at all? Or …
...the only thing is they sometimes they send District Nurse for some blood. Or blood pressure. But that’s about all.
You take medication for that is it still quite high then or does it ever go down a bit? Your blood pressure?
Oh yes, it, I think it does go down, yes. Sometimes the District Nurse turns up and takes the blood pressure and after she says, “Oh, it’s not too bad today”.
Right. So it’s variable?
So, yes it, it does vary a bit. I think it’s not too bad at the moment.
Previous Page
Next Page