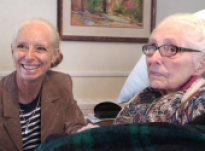 Age at interview: 82
Age at diagnosis: 81
Brief Outline: Stella had a stroke in 2009 and her left side was paralysed. She spent several months in hospital and now lives in a nursing home. Since the stroke she has had several TIAs, which often leave her feeling tired, but she does not remember much about them.
Background: Stella is a retired teacher, and she is widowed. Her daughter Deborah is a self-employed book-keeper. Ethnic background/nationality' White English.

Stella had a stroke in late 2009. She was found by her neighbours who called an ambulance. She was in intensive care for a while, and then moved into the acute stroke ward for a month, followed by time on a general ward, where her daughter Deborah feels the rehabilitation and care was not so intensive. Deborah herself spent the first two months with her mother in hospital on a daily basis, making sure her needs were responded to quickly. She feels one-to-one care is very important in helping someone recover. Unfortunately she had to return to work. When Stella moved to the general ward, she felt as if it was a signal there was no hope of recovering, and that staff felt there was little point in offering lots of physio, for example. Stella was moved to a community hospital, and the family were not happy that she was getting enough attention there. Stella feels more constructive care was needed. The family were particularly angry one day to find Stella – who always prefers to wear trousers - in an ill-fitting dress that she would never have chosen, because staff found it easier to take people to the toilet if they were wearing a skirt.
So Stella went to a nursing home where she and the family feel the quality of care is excellent. Deborah lives abroad and comes over every two months to spend time with her mother, and Stella’s friends still visit a lot. The only problem with care is having to wait sometimes for people to come when you press the call button. Despite the good care, nothing can make up for the losses that Stella has experienced because of the stroke. She can no longer garden, or dance, or ice skate, and she cannot read or play the piano any more. The staff are very kind, but having to be washed is difficult to accept, and things like getting her teeth brushed may get forgotten. Stella was always a very active and fit person who lived a full life with lots of socialising and a well-planned timetable. Now she has lost that control and choice.
Since the stroke, Stella has also had several TIAs. They last only a very few minutes, and she cannot really remember having them, but sometimes they do leave her feeling very tired and confused, especially the slightly longer ones. Deborah has seen her having a TIA while sitting in the garden – she noticed that her mother’s facial expression had become fixed. The nursing and care staff say sometimes she is just staring fixedly at them, and on one occasion when Deborah telephoned she could hear her mother ‘babbling’. The medical staff have changed her medication to try to avoid getting any more TIAs, though in fact Stella had one the day before she was interviewed, while she was having her hair done. Because Stella is not really aware that she is having one, she may well have had more TIAs while she is on her own that no-one notices.

For more of Stella and Deborah's interview see the Healthtalkonline website on TIA.

Stella and her daughter talk about changes in taste and food preferences.

Stella and her daughter talk about changes in taste and food preferences.

View topic summary
SHOW TEXT VERSION
PRINT TRANSCRIPT
Deborah' Mum’s taste changed with the stroke. Whereas Mum would like Madras curries, Tabasco and hot sauce, [also] strong cheeses, those can’t be on the menu anymore. You find those too difficult to eat, don’t you?
Stella' Yes. The cheese is too sharp.
Deborah' Yes, so the stroke has affected Mum’s taste buds, and things that Mum used to love - like she used to love fish, Mum would eat meat and things - those are things that you don’t like to eat anymore.
Stella' No, I don’t eat those anymore, fish and meat, beef. We had roast beef the other day, the day before yesterday, but I couldn’t eat it. They were nice slices of meat but I couldn’t eat them.

Stella feels that her rehabilitation stopped too soon and that exercises should be provided to...

Stella feels that her rehabilitation stopped too soon and that exercises should be provided to...

View topic summary
SHOW TEXT VERSION
PRINT TRANSCRIPT
Is there anything else that you want to get across to other people from your experiences that - either to other people going through it or to doctors and nurses - that you think they ought to know about?
Stella' I wish there would have been some assistance with mobility. I would like to have had more exercises to my legs, if possible.
Deborah' Mum found it a bit hard that the physios - in the hospital they were excellent especially on level 5. On level 4 it had been knocked down a bit, because--
Stella' I think it had been neglected.
Deborah' They realised that there wasn’t as much movement as they had hoped for. Here there’s very little, apart from the exercises as Mum had said earlier. And I think Mum misses the exercises. I mean obviously the left side won’t work because now deterioration in the muscles has occurred, and now more in the right leg as well. I think even if they do feel that the patient is unable to do things, I think it would be nice for the patient, if the patient is enthusiastic.
Stella' To have an idea that you can have a try.
Deborah' Yes, to just try and - even if it’s the big toe or just moving the foot round, just any kind of encouragement to keep the body fit.
So it’s that, all that sort of rehabilitation stuff?
Deborah' Yes.
Stella' Yes.
Sort of initially okay, but then maybe dropped off a bit?
Deborah' Yes, because they realised that Mum’s mobility wasn’t.......
Stella' There’s no hope.
Deborah' Yes. We did have a problem in the hospital because of Mum, because they were trying - Mum had a pacemaker fixed while she was in the hospital, because Mum would have spells of passing out every time they tried to get Mum standing up. So of course then obviously physio was slowed down a bit. But physio can still be used when a patient is lying in bed, or even in the chair with the arm, but it’s like they get to a certain point and they feel that the patient can’t do that.
Stella' You can’t go on any more.
Deborah' So then they don’t follow it through. And it would be quite nice if they did just carry on doing some kind of physio. You’ve really missed not doing any of the physio, haven’t you?
Stella' I have, yes. Yes.
When you said, “There’s no hope”, it’s like it’s not just doing it that you miss, but also it’s a signal that, if they don’t give it to you, that...?
Stella' That I can’t even try.

Stellas daughter comments on the lack of attention to small matters (including dressing and...

Stellas daughter comments on the lack of attention to small matters (including dressing and...

View topic summary
SHOW TEXT VERSION
PRINT TRANSCRIPT
And what about the community hospital phase? Is there anything to say about that?

Deborah: We were, so we went from the [main hospital] to [the community hospital],  that was in November and Mum was there November and December. Not brilliant.  I had to go back [home] because of work, so there was just no choice of me staying here, and unfortunately the care was dropped off a bit.  They tried their hardest, they’re a small community hospital, but I mean for example that one day when they - Mum has always been a person that wears trousers. She’s not one of those ladies that wears skirts, but it was more convenient for them for Mum to wear a skirt for toilet purposes. And Mum doesn’t have very many skirts. Well, we brought in as many skirts as we could, but there was one day when we came in and they’d put Mum in this crimplene dress which was too small for her. And I was livid, wasn’t I? “What the hell have you got on?”

Deborah: And so I felt that there wasn’t enough care and consideration in what they were dressing Mum in, but it was because it was more convenient for them, and it wasn’t what Mum would have worn, whereas here Mum gets the choice and Mum will pick out what she wants to wear, and they don’t worry about Mum wearing trousers. Mum likes to wear trousers. Whereas in the community hospital they didn’t want to deal with the trousers,  and I was not happy that day when we went in.  I think they did try.

Was there any expectation, I mean when she, when you went there, were they thinking that you’d go home at the end, or was it just a sort of a, like a holding station until you...........

Stella: I think it was a holding place, yes.

Deborah: The doctors had already told us that Mum would be unable to go home. One of the main problems, I mean we could have got a chair put on the stairs and things like that, but the problems with having carers at home we could have done [during] the day but obviously there would have been a large part of the night when Mum wouldn’t have had anybody in the house, which was definitely out because Mum does need 24-hour care, don’t you, and you know that.

Stella: I think so yes.

Deborah: Sometimes Mum at night needs reassurance that there are people around, and here they are aware of this so they do pop in or they just.................

Stella: They do look to see that you’re still alive.

Deborah: Yes. You just like to have reassurance that there’s people around, don’t you?

Deborah: And it gives you peace of mind if someone comes in. And sometimes Mum feels lonely being here in the room so some of the carers will sit with Mum and have a cup of tea and read.

Stella: One came and had a cup of tea with me the other day.

Stella: Before she went home.

Deborah: Yes, and some of the carers, one of the male carers will sit and read to Mum as well.

Deborah: Yes. Because I mean reading was one of Mum’s joys I mean always reading books.