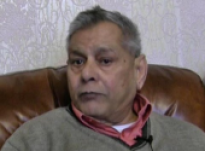 Age at interview: 65
Age at diagnosis: 58
Brief Outline: Mr. Singh had a heart attack and four strokes between 2003 and 2010. The strokes affected his left side and left him feeling restricted. His heart muscle is damaged and his heartbeat irregular. Over time he has regained some strength in his left leg but cannot use his left hand. Since having his heart attack and strokes, he has made many lifestyle changes which include daily exercise and healthy eating. His goal is to throw away his walking stick by next year.
Background: Mr. Singh is a 65 year old retired postmaster. He experienced several strokes (the first one in 2003 and the last one 2010). His ethnic background is Indian Muslim.

Mr. Singh had a heart attack and four strokes between 2003 and 2010. The first episode occurred while at home with his family. When he started breathing heavily, his daughter recognised that he was possibly having a heart attack and called for an ambulance. While in hospital he suffered a stroke which affected his left side (leaving him unable to use his left hand or left leg) and damaged his hearing. He remained in hospital for 6 months, received rehabilitation, and rated his care favourably. While recovering in hospital, he was determined to see his daughter get married, which fuelled his will to survive. He eventually regained function and was able to walk.
Unfortunately he suffered a second stoke while at home with his wife. After falling in his bedroom, his wife called for an ambulance. This stroke left him bedridden in his home for 3 months. Other episodes of stroke occurred while flying to Australia and again in Australia where he was visiting his daughter. Symptoms included a severe headache on his right side while in flight, and then loss of balance while bathing leading to a fall. He was left wheelchair bound and heavily dependent on his wife for support.
Since these experiences with heart attack and stroke, Mr. Singh has regained some mobility (uses a walking stick), but is unable to use his left hand. His heart muscle is damaged and his heartbeat irregular. The strokes left Mr. Singh feeling restricted. He no longer drives, and has to rely on others (e.g., his wife) to take him out of the house. At the same time, he is very grateful to be alive.
His family has taken an active role in is recovery, particularly his wife who assists him with activities of daily living (i.e., getting dressed and using the toilet). He worries about the emotional toll that his strokes has had on her and tries to be patient when needing assistance. Mr. Singh also received home care services during his recovering periods including nursing care, occupational therapy and physiotherapy and made several modifications in his home to suit his functional needs (i.e., raised toilet seat, bath seat, etc).
Mr. Singh feels that his history of smoking and drinking alcohol were the main causes of his strokes. After his first stroke he made many lifestyle changes' he stopped smoking and drinking, started eating healthily, and exercising daily (to lower his blood pressure and cholesterol level). He is working to regain more strength and hopes to throw away his walking stick in one year.

Mr Singh had a stroke in hospital after being admitted for a heart attack. The stroke occurred...

Mr Singh had a stroke in hospital after being admitted for a heart attack. The stroke occurred...

View topic summary
SHOW TEXT VERSION
PRINT TRANSCRIPT
So when I started heavy breathing, breathing heavily my daughter realised that I’m having heart attack. So she immediately called ambulance. And the ambulance came here. The mistake that I did I tried to show myself brave and I said to the ambulance people, “No, I will walk down myself from up the stairs to down the stairs.” Any when I came down the stair then the breathing become very heavy. And in the ambulance my breathing was really, really heavy, so they informed the hospital that [name of hospital]. They immediately consultant and everybody was there. They, they, they saw my condition. They realised that my heart is pumping really heavily. My heart reading is really high. So they, they give some medicine to calm me down. But they realise that I’m going through heart attack.
And in the night I was in the hospital, in the hospital and during the night I don’t know what kind of medicine was given to me, whether to reduce to my blood pressure or to reduce my breathing but as a result, in the night, I had a stroke. My left side is gone, completely gone. Now it is slightly better but at that time it was very, very bad. I was not able even to turn in my bed, turn sideways in my bed.
So the next day condition was really bad. My doctor, my consultant told my relation that if I survive tonight then I will be there in the morning. If I don’t survive that is the end of the story. And afterwards when I was talking to my consultant I asked him how far I was away from my grave. And he said, “You were about six inches away from your grave, your condition was so serious, we had no hope that you would survive but you survived luckily. It was your will to survive and therefore you survived.” My, my will was because of the reason I wanted to live to see my daughter who is a dentist get married. So I want to live. And as a result of that will I survived.

Mr Singh does his exercises twice everyday. His brain has forgot he has a left leg so he has to...

Mr Singh does his exercises twice everyday. His brain has forgot he has a left leg so he has to...

SHOW TEXT VERSION
PRINT TRANSCRIPT
Every day, every day this is my routine, this is my routine. I get up early morning at 4 o’clock and I start to do my exercise in my bed, at 4 o’clock in the morning So I do my exercises after when I after seven o’clock again when I get up then I come down and make myself tea and all that. And then again at nine o’clock I do again a second set of, of exercises. So during the day I go out of my house and walk in my drive so that my walking is improved because my brain has forgotten that I have a left leg. My brain does not do any indication that I must use my left leg. I have to persuade myself I’ve got a left leg. And in my bedroom there is everywhere posters that I have got a left leg, how to use my left leg. Everywhere I turn in my bedroom you will see a poster here. My daughter made it. Dad remember you’ve got a left leg, don’t forget to use your left leg. So everywhere there is posters in my house. So I use that. I try to train my left leg even though there are no instructions from the brain to my left leg.
I try to use. I try to put pressure on my left leg be, because my left, left leg doesn’t carry weight automatically as you carry your right leg with... and the left leg. But my left leg …unless I tell my left leg, “I have to put weight on you.” So I stand it like that, so put the weight on my left leg to train, to train my left leg to carry my weight. And when I am aware walking I’m folding my left leg a little bit because I don’t lock my knee.
So I fold them and then I walk with the left leg.
Right and left leg.

Mr Singh talks about the harm that smoking and drinking does.

Mr Singh talks about the harm that smoking and drinking does.

View topic summary
SHOW TEXT VERSION
PRINT TRANSCRIPT
When I see somebody smoking, then I feel, I feel oh this man is smoking for his, how stupid he is, why is he smoking? There is nothing in smoking. Sometimes I feel like that because smoking can cause your heart, could cause your blood pressure, could cause all that.
So what, what message do you have for, for other people when you see engaging in behaviours like smoking and other behaviours that could lead to stroke...
Yeah, yeah.
..for example...
I just.
..what, what message do you have for them?
Actually I wanted to go somehow if somebody could film me and show it to the public on the television that this is the result of smoking, look at this man. This is a result of the smoking.
He can’t walk. He can’t he can’t walk. He can talk so they should show, show it on television to advising people not to smoke. It is a silly thing to do. There is absolutely no reason to smoke.
Smoking does not help in anyway. You think, “ Oh it control my nerves.” No it’s all nonsense. Smoking does not control your nerves and all that.
It is just habit that you are smoking. You are unnecessarily killing yourself. You are spoiling your lungs. You are spoiling your heart for no good reason. The smoking doesn’t help you. Same as the drinking it doesn’t help you at all.
No, no, no. You’d think that, ‘Oh I’ve got so much pain. I, I lost so much of my money. I’ve got so much worries so I must drink. No this is all nonsense. This smoking, drinking cannot reduce your worries.
It can’t. It can give you a temporary escape that is all.
Previous Page
Next Page