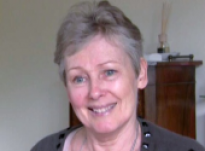 Age at interview: 61
Age at diagnosis: 53
Brief Outline: Jackie suffered a stroke in 2003 while home alone and was found by her daughter 28 hours later. She voluntarily chose to retire from work so she would have enough stamina for other things including recreational activities in the community.
Background: Jackie is a 61 year old retired property manager, who left work voluntarily after her stroke. Her ethnic background is White British.

Jackie had a stroke in 2003 while at home alone and does not recall having any symptoms leading up to it. Her last memory before the stroke was housecleaning, where she presumably collapsed in her kitchen. She was in and out of consciousness for a period of about 28 hours before she was found by her daughter.
The stroke initially affected Jackie’s speech and mobility, which she has since regained, even though she was initially told that she would never walk again. She has limited function in her right arm and no use of her right hand. She subsequently taught herself to write with her left hand. When asked if she felt the stroke had changed her, she mentioned that she noticed a small personality change in that she is not as passive as before and much more assertive.
After receiving care in the hospital, she spent some time living with her sister-in-law who is a nurse. While living with her sister she purchased private physiotherapy homecare services, which she preferred over the public homecare services available. With the help of her family, she transferred to a neuro-rehabilitation centre for 3 months where she received a range of care including physiotherapy, occupational therapy, nursing, speech therapy and recreation therapy. She rated her care experience favourably. Jackie is now connected to other community resources including pilates, which she feels has really helped in her recovery.
Jackie has a history of low blood pressure which causes her to faint periodically. She experienced several fainting episodes during her post stroke treatment which was initially mistaken for epilepsy. She was given medication for epilepsy even though Jackie tried to explain that her symptoms were likely due to low blood pressure. This was cleared up over time. In addition, follow-up medical appointments indicated that she had a previous arm fracture which had gone undetected. The fracture likely occurred at the time of her stroke. Jackie feels that the focus on her stroke as the primary health problem may be why her fracture had gone undetected.
Overall Jackie was happy with her care, and attributes much of her success to her own motivation. She is divorced and feels that the absence of a partner forced who to do more for herself, thus, aiding in her recovery.
Jackie voluntarily withdrew from the workforce upon realising that if she stayed at work she would not have stamina for other activities such as volunteering, visiting with her grandchildren and participating in community recreational activities.

Jackie was found by her daughter in her kitchen where she had been lying (in and out of...

Jackie was found by her daughter in her kitchen where she had been lying (in and out of...

View topic summary
SHOW TEXT VERSION
PRINT TRANSCRIPT
Oh and I went into the kitchen. And then I went in presumably to get the things from under the sink for cleaning. And I just didn’t know anything. And sometime after that was about twelve o’clock thereabouts. Sometime after that my mobile phone rang and eventually I heard it. And I tried to get up from the floor and I couldn’t get up. And I don’t think I was properly awake. I think I was only slightly awake. And I didn’t know what was wrong and I thought, “Well my daughter‘s not here so I’ll have to wait until she comes back. And she wasn’t there because she’d gone to see her boyfriend on the Friday so she wouldn’t be back I knew until the next Sunday, the next day or possibly even the Monday. My, a younger daughter was in Borneo. Doing a cycle ride for another charity. So I just lay there. I didn’t, I mean I just shut my eyes and just drifted, drifted off. I came to again when I was dying to go to the loo. So eventually I don’t know how but somehow I took both of my trousers off. And then I put them... later on I put them on again when it was night time because I was cold. And I did, I didn’t know this until afterwards but I’d been sick a couple of times. And the next thing I knew was I could just, just hear, I didn’t see her but I could hear my daughter coming in. And she saw the hoover in the, in the hall and thought there must be something wrong. And she came into the kitchen and found me in the kitchen. And she phoned the ambulance. I once she come in, I knew I was safe so I didn’t you know, I just drifted off. I mean I was, I was still three quarters down but I drifted off. She obviously phoned her, my brother and sister-in-law but they were, they were on a ship. Had just left Madeira and I think it takes them three days to get, come home from Madeira. So she phoned her daughter who lives down in [name of city]. She said to phone her [tsk] I don’t, my nephew, her cousin. And he came, you know running over. She obviously got her boyfriend. And I don’t really remember anything until I was properly in bed. When she asked me a question and I thought I’d answered her perfectly and she didn’t understand a word I said. She told me that a month later. By this time, I’d been lying on the ground, on the floor in the kitchen for twenty-eight hours.

Jackie commented that she felt she was less passive since her stoke; the filter that kept her...

Jackie commented that she felt she was less passive since her stoke; the filter that kept her...

View topic summary
SHOW TEXT VERSION
PRINT TRANSCRIPT
And so what were your, how did your stroke affect you say physically, physically and cognitively and sort of, how did it, how did it change you in a way?
It changed me because I used to be very what’s the word? Non, no, not non-committal, but no, I did, if people were doing things that I didn’t like I used to, didn’t used to say anything.
OK, OK. So…
And if I didn’t, you know, didn’t like something I wouldn’t say…
So passive maybe?
Maybe, and, you know if anybody was, you know, I don’t know, I can’t think of a trouble now, but well my [sighs] my son-in-law, well he’s not son-in-law, my prospective son-in-law, when he was staying with us I had to tell him, “I’m sorry you’ll have to go.” Because he wasn’t working. And there were three women working and he wasn’t working and it took me two years to do, finally pluck up the courage to say, “I’m sorry you’ll have to go, you know, you’re not finding a job, you’re not, you know, I, you know, we three are working… you know, you’ll have to go home. I’m just, you know…” Now, [laughs] I’d say it.
Right.
I come out and say it.
And I don’t know why. My children think it’s much better… that I, you know, I do it, you know, I don’t know whether it’s because I don’t think about other people’s worry. I’m not quite sure. You know, I might not, I don’t, really don’t know. But I don’t do it. So there’s that [laughs].
Is that something that you like?
Well, yeah, I mean, I really don’t think about it, there, that’s the funny thing is that it just comes out [laughs].
[laughs]
And afterwards I think, “Ooh, I shouldn’t really have said that.” You know.
Great. So it’s like that, that filter maybe isn’t there?
Hmm. Yeah.

Jackie comments that nonmedical therapies like art and Pilates helped her recover.

Jackie comments that nonmedical therapies like art and Pilates helped her recover.

View topic summary
SHOW TEXT VERSION
PRINT TRANSCRIPT
And the OT came to visit me and, and they asked, asked what I might, what I’d need in the kitchen and in, you know, They’d already put.... a stair rail and so, I’d said that I could, would eventually be able to go upstairs and then in September, well no, August I suppose it was she asked if I would, she’s, said I’m, you know, “I’m sorry I’m going to have to give up.” And “What would you like to do? You know, and what sort of things are you going to try and do?” And I said I would like to try art because I’d tried it in [name of health facility] and, I’d drawn a modern sculpture of two people and I’d found it actually remarkably easy because of course I used to be right handed and I’m now left. And... so... and then I said I’ll like to do that and I’d also, also like to do Pilates. And she looked at me and she said, “I don’t think you’ll be able to do that.” And so I went along and joined, and did it.
I found out about it at Companion Cycling actually. They I tried a three wheeler and was surprised how easy it was. And, as opposed to a four wheeler and someone else with me doing all the work. So yeah, I’ve bought my own. And it’s, very good. I use it on hot very, I mean it, it’s you know... I’m lucky you know, these things not everybody can afford to have them but … you know, I went to a bike shop and it so happened that the one I wanted his, he had just, he had recently bought one for his mother and she went out once and then said she’d never go out again. So I was able to get a new but a lot less and, that somebody else could use … and so I was very lucky.
I’m allowed to use that which is wonderful and you know.
The art and the Pilates how just, how to go down to the adult education and sign up for them and …
I moved and to my local thing which is just down the road and do it there twice a week and that, again, that was just, you know, “Oh I think I’ll do that then,” you know. And… you know, these things pop up and sometimes, I don’t know why, but they do, you know.

Jackie explains that being unmarried forced her to do more for herself and be less reliant on...

Jackie explains that being unmarried forced her to do more for herself and be less reliant on...

View topic summary
SHOW TEXT VERSION
PRINT TRANSCRIPT
Some people say after they’ve had a stroke they feel like a different person, maybe because their roles have changed or their attitudes have changed. Do you think that’s the case for you?
I think it probably... when people are living in a marriage a lot of them I think will give up and expect the other person to do it for them. But I’m not in a marriage you know, whatever I want I’ve got to do for myself.
And I think maybe that has an element in it because, you know, there’s no doubt you know, if I had been married I think probably I would have done the same, I mean, you know, it, you do I think. And I think that perhaps more than anything has made me be as good as I can.
Previous Page
Next Page