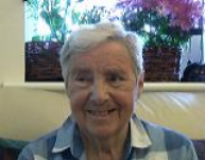 Age at interview: 89
Brief Outline: She had a stroke due to a clot at the age of 88. The stroke caused weakness and cold sensitivity in her left hand and problems with eating and drinking. Medication' Antibiotics.
Background: Is a widow with 2 adult children and a retired shop manager. Ethnic background/nationality' White/Scottish.

This woman had a stroke due to a clot blocking the flow of blood to the right hand side of her brain when she was 88 she is now 89. The stroke has caused some weakness of her left hand. Her hand has also become very sensitive to cold and she now has to constantly wear a glove to prevent the hand from becoming painful. She has also experienced some facial weakness and weakness of her throat muscles which initially made it difficult to drink and eat.

The hospital inserted a device called a peg which could deliver food directly to her stomach but in the end she was able to eat okay. Initially she had to have all her food pureed and had to use a thickener in her drink. She didn't like this and was pleased when she was able to get back to a normal diet.

She was in hospital after her stroke and feels that the care that she received was excellent. She was given some exercises in physiotherapy to help her hand movement and also had some heat treatment on her hand.

She lives alone although her friends and family visit regularly. Since leaving hospital she has had a daily carer to help her around the home and help with her meals this has worked out very well.

She feels that her hand is unpleasantly cold so she wears a glove to stop it becoming painful.

She feels that her hand is unpleasantly cold so she wears a glove to stop it becoming painful.

View topic summary
SHOW TEXT VERSION
PRINT TRANSCRIPT
And you wear a glove now, is that because it's numb?

You're wearing a glove on your hand?

It's because it's numb and cold. Never really gets warmed up. Though if you feel it, it will be quite normal but I find it's cold. Mm hmm.

And so do you wear the glove all the time?

I wear this one glove all the time. It, I don't, this one's alright, you see. And when I don't wear it' if it gets cold, it gets sore. So I just wear it, you know. Do my finger exercises and' it hasn't really changed very much for quite some time. It still keeps the same pace but I don't know whether that will come back or not but I certainly do my exercises and hoping it will come back, you know. But it could be worse. I mean, that's not a great disablement. It's just I can do my finger exercises. Mm hmm.

Found catheterisation a nuisance because she had to learn to attend to it each morning but she...

Found catheterisation a nuisance because she had to learn to attend to it each morning but she...

View topic summary
SHOW TEXT VERSION
PRINT TRANSCRIPT
So while I was in, in the care home, I had a' what do you call them? Peg?

Yeah. Because I had to be attended to every day.

Oh, was it a catheter?

A catheter. Mm hmm. That's right. I had a catheter. That was another nuisance [laughs]. Oh dear. However, I had to attend to it every morning, you know. So I got quite good at that. However, that finished but they, they left the, all the equipment in, just in case it came back again and that was a nuisance.

With the catheter, can you explain, was it, when you had it put in, what was it like having it put in?

Quite painful actually. But it was a terrible nuisance having to attend to it all the time, you know. However, I got over it.

And when they took it out, did they just take it out or did they gradually take it from you?

No. No. They just took it out. And that was that. I went back to a normal diet and that.

And did they give you any advice when you stopped using the catheter? Sometimes people are told to drink plenty of water?

No, I can't remember having told, been told that, no. But this is quite a performance every morning, you know, with this catheter. But' however, I was quite determined to do everything I was told to do, so as I would get better quick [laughs]. But it wasn't quick, it was a lengthy business.

She describes having a PEG tube inserted into her stomach but says it wasn't needed in the end.

She describes having a PEG tube inserted into her stomach but says it wasn't needed in the end.

So they never, you never had to be fed through that?

No, never. And I had it on for ages and ages and ages and then when I left the hospital' just had to come home' No, wait a minute I went to a nursing home and' I still had to have pureed food, you know, but it was a long, long time before I got, was able to eat anything solid, you know. And so I had this thing in here all the time. It's only about 2 weeks ago since I actually visited the hospital that I, this had been put in about' 6 months ago and then' I was' I was sent home and then I had to come back to have this thing sorted, you see and it was quite an operation it was really. Not very nice and they left me with precautionary tube in, you know. Well, it was in for about 6 months and never used because I got my voice back' and, so in the end, I, the last appointment I had at the hospital, I said, 'I want this out' and it was [laughs] don't know if you're interested but [laughs] he was a Greek doctor' and I, I said, 'I want this out', 'Oh', you see, he was horrified, you know. He said, 'I've never done that before'. I said, 'Well, I want it out because it's doing nothing and it's, it's just having, making it, things awkward for me' so there was two nurses standing by and they said, 'We'll take it out. We've done it before'. So they just'

Took it out. Mm hmm.

Well, it wasn't very nice because they had, they had to make a slit to push the tube in, you know, but it didn't bleed very much. It was really' but it was a terrible pest. However, I was determined to do all the things I was told to do.

But a relief to get it out?

Yes. So it's out now. Not long. It's only a few weeks since it came out and it's great.

She still likes to do some of the cleaning but breaks it up now so she doesn't get so tired.

She still likes to do some of the cleaning but breaks it up now so she doesn't get so tired.

View topic summary
SHOW TEXT VERSION
PRINT TRANSCRIPT
How about maybe doing things for yourself about the house? How did you find that?

Oh well, I do, I do. Uh huh. I do the dusting and I mop the kitchen floor, which isn't really' it's not very hard, you know, with a mop and a pail, one of the mop pails and I do wee jobs and keep the dusting under control and, but [the home help] does the rest.

Is there anything that you've found difficult to do since your stroke?

When she came home she missed the company and the support of the hospital staff.

When she came home she missed the company and the support of the hospital staff.

View topic summary
SHOW TEXT VERSION
PRINT TRANSCRIPT
How was it when you came home?

Not very nice. Not very happy for a while' because I, everything had been so wonderful in that hospital, I had such good care and then I came home and you're relying on the social work department to send you a helper and however it's turned out that I'm very happy, excuse me, I'm very lucky because I've got a carer who comes in four times a week, a day sorry [laughs], four times a day. So I'm very lucky.

But now I've been back home for what, two or three' two or three months, I can't remember which, I'm OK, I'm settled in fine, you know. I wasn't looking forward to come home because I wasn't, I live on my own, you see. So, however, aye, I like the company but.