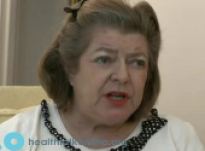 Age at interview: 61
Age at diagnosis: 54
Brief Outline: Verite was diagnosed with breast cancer in 2005, aged 54. She had a lumpectomy, radiotherapy and tamoxifen. She had severe side effects with tamoxifen and switched to Arimidex and then Aromasin.
Background: Verite is a journalist. Ethnic background/nationality' White British.

Verites doctors were directive in telling her which breast cancer treatment to have and she...

Verites doctors were directive in telling her which breast cancer treatment to have and she...

I had tamoxifen for two years. Then I was told the newest thing is that now you go from tamoxifen to Arimidex. Which I did.

And then my oncologist, Professor [doctor’s name], is very well known. He came back from the San Antonio conference in America, which is the big one, and said, “Oh I’m putting you on Aromasin now. So I went onto Aromasin. But I had side effects from all of those. I had the most ridiculous things, carpal tunnel syndrome, which people think is repetitive strain injury. And I stopped working. I couldn’t use a computer. And then discovered that was a side effect of one of the drugs I was on. And had injections and that cleared up.
Then I went to see, I had problems with my heart and I went to see a very eminent specialist Mr [doctor’s name], and he said, “Oh you need a seven hour heart operation.” And I said, “Is this due to my cancer drugs?” “Oh no,” he said, but about six months later I had some research information from John Hopkins in America, and also from Dana Farber, two of the world’s top research places, and they both said anybody on those drugs, twenty five percent of us will have heart problems. And I’ve now picked up osteoporosis from the side effects. And I’m having problems at the moment with the drugs that deal with the osteoporosis.
I don’t mind, if I’d been told you’re going to get the side effects I would have fully have accepted it. But that was my choice. But at no time did any of the oncologists tell me, “Oh well these are the possible side effects.” They just tried to brush them off.
Do you know which side effects came with which of the drugs at all or….
Well I know that the blindness came with the tamoxifen, and I know the skin lesions came with tamoxifen. But now I can recognise the preliminary signs of skin lesions, where my skin gets incredibly dry and I start itching, as though I’ve got fleas. I know that’s more skin lesions happening and I had that with both Arimidex and Aromasin. But thank goodness for Roche Posay. I just slap on two or three times a day, the products, and that sort of calms my skin down.
Previous Page
Next Page