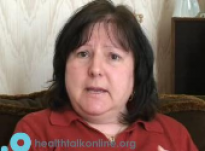 Age at interview: 54
Age at diagnosis: 53
Brief Outline: Linda was diagnosed with DCIS in 2007, aged 53. She had a wide local excision, followed by a mastectomy. She was also prescribed Nolvadex for five years.
Background: Linda is a married teaching assistant with one adult child. Ethnic background / nationality' White British

Once she was told that she had a high grade tumour she felt that there was no longer a real...

Once she was told that she had a high grade tumour she felt that there was no longer a real...

She [doctor] did warn me that, if the calcifications were what they call high-grade, there’s three grades, low, medium and high, that there would be a possibility of a mastectomy. Well I couldn’t understand this because you hear of people who have had a lump removed, but haven’t had their breast removed, and I’m thinking, “Well, if this is pre-cancerous, why am I having this mastectomy?” But of course she didn’t know at this stage whether I would be high or low or medium grade. So it was about a week later actually that she came to see me, and I could tell by the look on her face that all wasn’t well, and she sat down and said, “I’m really sorry but they are high grade and the only thing we can offer you is a mastectomy.” And I could not believe this, I thought well, this is crazy, it was like an out of body experience, she wasn’t speaking to me, she was speaking to somebody else, this can’t be happening to me, you know.

So she sat there and I said, “Well surely there’s got to be an alternative.” But again it was all taken out of my hands; I had no control of what was going to happen to me. All she kept pushing for and I’ve realised afterwards, why she was, or why they were saying this, that I had to have a mastectomy, that there was no option.
She did sort of mention in passing that if I was totally against this, then they would possibly give me an intense course of radiation, but they couldn’t be 100% certain that they would get, or kill everything off. So really I had no choice, and this seemed crazy to me, absolutely seemed crazy. So I just said well okay, there and then. She did say of course, “You know talk with your husband and your family,” of course my husband just said, “Well get rid, get rid right away.” You know, and then that’s it as far as he was concerned.
About two weeks later I think it was, I went to see the specialist. My husband came with me. Again he was behind a curtain and I wanted him to be very much involved because you can only take so much in, of what they’re telling you, and I had to, I felt that I had no choice but to go along with whatever he was saying. I just wasn’t given this choice. I realised that he was telling me that if he didn’t take everything away then he couldn’t be 100% certain that everything had gone and there could be more calcifications that he hadn’t found. It just seemed so extreme at the time. So extreme. I just went along with it. To be honest I was numb really. That was all I could think was well I’ve got to have this, you know, there’s no choice, I’ve no choice.
Previous Page
Next Page