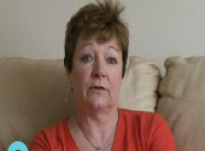 Age at interview: 51
Age at diagnosis: 50
Brief Outline: Sandra was diagnosed with DCIS in 2007, aged 50. She had a mastectomy and immediate reconstruction using an implant. After surgery, Paget's disease was also found.
Background: Sandra is a married nurse with two children. Ethnic background / nationality' White British

Was confused and angry when she heard that the multi-disciplinary team had discussed her case and...

Was confused and angry when she heard that the multi-disciplinary team had discussed her case and...

Anyway, on the Thursday, apparently I was discussed at the multidisciplinary team meeting. And I got a phone call to say, no, you don’t need radiotherapy after all. And that was devastating. I felt like I should be jumping up and down for joy, but instead I felt that I wasn’t getting the treatment I should be having. And that’s when I started getting really emotional.

You can’t, you know, well I was emotional and angry; I marched up and down this room. This doesn’t feel right, why, how can you be given three reasons as to why you need radiotherapy, cancer cells were too close to the chest wall, the cancer cells were all high grade, and they also found Paget’s, two lots of cancer as they described it. And now, I haven’t been given any reasons as to why I don’t. Apart from you don’t have radiotherapy for DCIS unless you’ve just had a wide lump excision. If you have a wide lump excision you’d have radiotherapy, but not if you’ve had a mastectomy, the idea is that it’s all gone.
And I really didn’t feel very confident at all. I phoned the Breast Cancer Care helpline, spoke to somebody there. She suggested really that I try to find out a little bit more information, that I ask to see the consultant, which I did do, and I got an appointment for the following week.
Following on from that I went into see the plastic surgeon. The plastic surgeon had obviously been told by the breast care nurse that I was worried ‘cos I wasn’t having radiotherapy. He bounced in because he’s quite a character and said, “I’m pleased you’re not, don’t need radiotherapy, it would have played havoc with my implant.” Oh like this. And I said, “Well I’m glad somebody’s pleased.” And he said, “Why, what is it about, what is it that worries you?” And I said, “I just feel that I won’t know because the implant is there.” And he said, “No, no, no,” he said, “Your chest wall is now on the top, not underneath the implant” he said. “Because your chest wall, the muscle was lifted to put the implant underneath, it’s your chest wall that’s holding the implant.” So this bit here is chest wall, muscle, my chest muscle. So the breast is sat on top of this bit. So he said it’s now on the top. So he said if there was any hint of anything that was left behind, you would get a local reaction. And that’s when I felt more confident. I walked away and I said, “Now I’m happier.”
Previous Page
Next Page