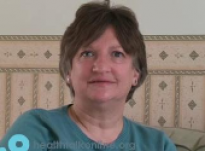 Age at interview: 54
Age at diagnosis: 53
Brief Outline: Patricia was diagnosed with DCIS in 2007, aged 53. She had a mastectomy and LD flap reconstruction six months later. She will also be taking hormone therapy.
Background: Patricia is a married clerk with two grown up children. Ethnic background / nationality' White British

Discussions with her doctors reinforced her immediate decision to have a mastectomy. She was less...

Discussions with her doctors reinforced her immediate decision to have a mastectomy. She was less...

We went back and the very smiley doctor looked a lot, even more serious than when she was telling me I had cancer, and I thought, “Oh, I don’t like this.” And she then started to explain, or asked me how much I’d remembered from the previous appointment. And I said not very much because I was so shocked. And then she started to explain about the pre-cancerous area as well as the area of the lump and I just remember turning around and looking at my husband, thinking, “I’m sure this is more serious than she said last time.”

But of course, you know I had very vague memories. And then I remember just saying, “Oh in that case I want a mastectomy.” My friend had had a mastectomy twenty years previously, she was doing very, very well thank you very much, and I just wanted to get rid of it I think. And then my husband said, “Well is that really necessary?” And the doctor said, “Well, in situations like this, it’s not ever the wrong decision.” But I don’t think I really knew what DCIS was at that time at all.
Had they used the word DCIS?
No, she just said pre-cancerous area. And I think, you know in my head I was thinking well, if they’re going to take two big lumps from my breast, they may as well take the lot ‘cos they weren’t that big.
I don’t really remember, oh yes, then we went, had to go and see the surgeon, and he drew a picture of a breast and did lots of specks all over the breast and said, “Oh, you know, it probably is a good idea to have a mastectomy.” And I was going along with whatever was being said to me at that point.
Then a few, you know, a few days later I was getting upset and said, “Look I don’t want to go through with this anymore.” I said to my GP, “I don’t want this anymore.” But at no point did I actually say, “I definitely don’t want the mastectomy.” And I know that, and I also knew that I could make myself sound a lot more confident than I actually am, and she, they probably all believed me when I said, “I want a mastectomy,” you know. Because I didn’t, you know, I didn’t really totally understand what was happening to me. I know I had, I knew I had cancer, I knew I had a lump.
I then, on the day of my pre-op assessment, I asked the breast care nurse to meet me. And I said, “You know the surgeon wouldn’t be doing this if it wasn’t necessary?” And she said, “No, he wouldn’t.” And even then, although I was getting upset, I didn’t want the operation, I didn’t say, “I’ve changed my mind.”
About any operation, or about the mastectomy?
About the mastectomy. I knew I had to have the lump removed. I knew it was sensible to have both areas removed, but I hadn’t, I couldn’t actually bring myself to say, “I don’t want the mastectomy anymore.” Because you know, in my heart I was thinking, well it, you know it would make life so much easier, but I, sort of, at the same time you do, I haven’t got the most wonderful of body images, so the thought of losing my breast as well, you know, it just was just too much.
Previous Page
Next Page