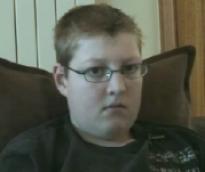 Age at interview: 15
Brief Outline: Jamie lives with his parents and his two sisters. He is not allowed to play any contact sport but he does swimming, cycling and he plays golf once a week. Ethnic background/nationality' White British.
Background: Jamie has a heart condition called hypoplastic left heart syndrome. He was diagnosed when he was six days old and underwent pioneering and life saving surgery. He gets breathless very easily and is not allowed to play any contact sports. Jamie absolutely loves football so at home he plays it in the garden with his sister and a neighbour.

He doesn't always understand what the consultant is saying when talking to his mum during the consultation but afterwards his mother explains things to him.

He doesn't always understand what the consultant is saying when talking to his mum during the consultation but afterwards his mother explains things to him.

View topic summary
SHOW TEXT VERSION
EMBED CODE
PRINT TRANSCRIPT
Now when he explains things to do with your condition do you understand when he talks to you or sometimes he uses language that you don't understand?

He uses language that I don't understand they're like mild abrasions. I don't get what he means by mild abrasions. And I, in the, and I do get, I understand some words like, he bruises easily, like he bleeds under the skin. And it's like and that's and just talks about that a lot of the time.

Do you say anything to him? Do you say, 'Excuse me I don't understand, can you explain this to me?'

No. I didn't get a chance because he was, he were talking to me mum all, he was talking to my mum all the time.

So he doesn't talk to you?

Well he sometimes does but not all the time but he just talks to mum mostly, my mum mostly about what he's going to do, what I'm going to do.

Ok. And then your mum explains to you?