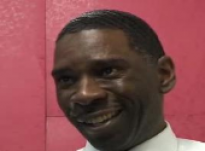 Age at interview: 45
Age at diagnosis: 40
Brief Outline: He was admitted to hospital with a high temperature and headaches where he was diagnosed with HIV. He negotiated his current treatment regime with his doctor (Kaletra and efavirenz), (Video and audio clips read by an actor.)
Background: A highly educated health professional working full time. He is a black African man married with children.

Found out about a new treatment at an AIDS conference in America and had a dynamic discussion...

Found out about a new treatment at an AIDS conference in America and had a dynamic discussion...

View topic summary
SHOW TEXT VERSION
EMBED CODE
PRINT TRANSCRIPT
I looked at the role of, you know the thiamine derivative drugs, you know the, like the AZT, DDI. And I noted that most of them they, they are the ones causing you know, mitochondria DNA toxicity, and to some extent, lipodystrophy. That was my understanding. And of course one of my drugs was that one.
And in February this year there was, you know the Aids Conference in Boston, and there was one paper which presented to there where was a treatment whereby you can use two drugs minus the thiamine derivative. So when I went in for my appointment with my doctor I said, 'Well look can't we try this?' So it was quite a, a very sort of dynamic discussion, yeah.
So he said, 'OK we can try it.' Because what we have seen from this paper they presented is that you can actually be on this one and actually the… the effect of long term in terms of lipodystrophy isn't that bad. Although it cannot be completely be reversed. But I think it is the effect isn't that bad for long term.
So that was sort of looking at, you know the length of time I'll be on the treatment. I said, 'Well that sounds fair.' You know sensible to go for that. Then the, secondly I think the only downside to that combination, two combination, was that I think you ran the risk of having a high cholesterol level. But obviously I said, 'Well I mean it's something I can monitor by what I eat.' So we somehow, between myself and my consultant we agreed.
Previous Page
Next Page