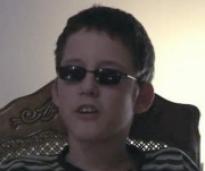 Age at interview: 16
Age at diagnosis: 11
Brief Outline: James lives with his mother and two brothers. He attends an ordinary school which also has a unit for partially sighted and blind students. Ethnic background/nationality' White British.
Background: James has a renal condition called Senior Loken Syndrome and it means that his kidneys didn't develop as he grew older. James was diagnosed with his condition when he was eleven years old and since then he has spent much of his time on dialysis. Four times a week he goes to hospital to have dialysis and he is able to attend school two days a week. This condition affects both his kidneys and his eyes and James is now registered blind.

Newly qualified doctors use long and complicated medical words but his consultant is 'really nice' and talks to him in a clear way.

Newly qualified doctors use long and complicated medical words but his consultant is 'really nice' and talks to him in a clear way.

View topic summary
SHOW TEXT VERSION
EMBED CODE
PRINT TRANSCRIPT
James' I guess so 'cause a lot of doctors don't like to tell me what's going on, you see.

Why do you say that?

James' Well it's just my consultants I think. They don't like giving bad news. My consultant he's called [name] and he always tries to. If he has to give bad news he'll wait until he finds something good. So he could have the results in two weeks of whatever he's done and you could wait two months because he'll have to wait until there's something good to tell as well. And when he has to tell bad news he usually waits ages to do it, you know, just in case something good will happen.

Always tell what. Tell the, tell the young person everything that's going up and use small words. 'Cause sometimes doctors use all the medical terms and terminology and sometimes even the parents don't know what they're talking about. So it's like use words that every day, you know, use everyday English to explain what's going on 'cause it's a lot easier to deal with when you know what you have.

Have you had experiences of that, of not understanding when they use  long words or medical terminology?

James' Well it's, it's more of that the new doctors, they like to impress people by using all these scientific terms.

What do you mean by new doctors?

James' You know just doctors that have come to a new ward or come to this hospital new and.

James' And they like to use all these, these, this terminology because they can I think. It's like, you know, we've learnt all this stuff we might as well use it. And they, I think they forget that we have no idea what they are talking about. We do not know what they are saying. They could just be saying blah, blah, blah as all we could, as you know, for all we know.

And what about your consultant, the person that sees you?

Ok and the nurses. What's your experience of the nurses?

James' Oh they're very nice people. You know you. 'Cause I'm with the same nurses all the time, you see, 'cause it's, it's the nurses that go to the hospital, stay there for years in the same place. So you get to know the nurses and they get to become your friends rather than just nurses. You know so it's just a very friendly atmosphere, very nice people.
Previous Page
Next Page