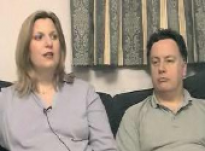 When making the decision to end the pregnancy at 17 weeks, they wanted to do what was best for...

When making the decision to end the pregnancy at 17 weeks, they wanted to do what was best for...

Mother' But yeah, once we knew it was the most severe case and once the consultant looked at me and said, “How pregnant are you?” And I told him, and he said, “I can't believe you're still pregnant. Most of these are gone by 11 weeks.” And that's when I kind of concluded that I was trying to miscarry for thirty days and my body just held on. And it was a bit cruel, really, that my body held on but...

Did you think about just letting nature take its course?
Mother' I don't think we ever did.
Father' No, I don't think so. I mean, we had, because of circumstances we had, you know, time to think about what we were doing. You know, it wasn't a 'see the consultant and then 24 hours later proceed with the, the termination'.
Mother' We actually waited.
Father' There was a fairly lengthy period. So we had time to reflect.
Mother' Because at that point I would have to give birth anyway. So we waited about a week and a half before we did that, which was...
Father' And there were moments when we, you know, you have doubts. You think to yourself, “Is this right? Are we playing God?” and so on, you know. “Should nature take its course?”
Mother' We still don't know that we did the right thing. We just, we made the best decision we could with the facts that we had at the time and we did what we thought would be the best for us as a family and for our child. You know, I can't say that we only did it for our child. We did consider us as a family and taking care of a child, and not knowing how bad it was going to be, if she was born alive.
I mean, the consultant said, “I don't think she'll be born alive, and if she is born alive she's going to need instant surgery, and I don't give her long. Five years tops.” And I thought, “I don't want my child to suffer”. I would rather have to live with this the rest of my life than to see my child full of tubes and know that...
I felt that was selfish for me to do, just so that I wouldn't have to deal with what we now have to live with. But it was just heartbreaking to have that be our first decision as parents. So that's the hardest part.
Previous Page
Next Page