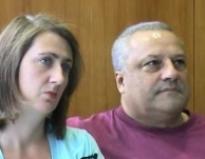 For them pre-implantation genetic diagnosis is compatible with their Christian beliefs, though the Catholic Church might not agree. (Read by actors.)

For them pre-implantation genetic diagnosis is compatible with their Christian beliefs, though the Catholic Church might not agree. (Read by actors.)

Man' I just feel for me like I feel for other people. I do leave the individual to deal with all these issues. And if I'm against abortion, or I don't want to proceed, it's very personal and it's my choice. And even if I disagree, I entirely respect someone else that wants to go down other avenues. And what I strongly feel about it is that that should be available for everybody… Because I might be a believer, someone else may not be… I mean I'm firmly in favour of rules or procedures, very strict rules and procedures which have to regulate all this area… But, on this particular case, then I leave it to the individual. It's your conscience that decides.

And in moral and religious terms for you the pre-implantation diagnosis is much more acceptable?

Man' Yes, but I mean not only for me morally but also physically. I think that there is quite a substantial difference if you are actually conceiving, you have conceived and you are going through the abortion without knowing - or you have tried to your best to avoid that possibility. I mean, here they advise that if you are pregnant you don't have to smoke, but no one tells you if you're getting pregnant and you know when you get a disease, to do everything you can to prevent it, in a very easy manner. So you take all the precautions. You're only doing it because first of all you want to protect and preserve the life, even, of who is the future being, of your offspring, and just like any other parent in any respect. So when I'm doing this procedure, I feel like I'm doing exactly the same. I'm trying my best not to smoke, not to do all these things that potentially we know could be harmful to the child.

Woman' And the same rule applies, not only for thalassaemia, if you have a condition and the only hope to save the child is bone marrow transplantation, or a number of operations which can be done can be improved by having a sibling or by being pregnant. And the general feeling is that somehow the church does not allow this. Because although you try the very best to save your child, why can't you try? If you can have any possible operation or replacement of an organ or whatever, to make one life better, why can't you do it with the help of for example a sibling, or with the help of technology? But not because you're worried about aesthetics. Because you're concerned about the health, because you want to try and give the best start in life for the child… And this is of course one of the questions which you just ask yourself over and over again. And that's why you do ask yourself, why is PIGD a better solution than just trying for it and then it may go well or it may not, and then you take the consequences, or you decide on the consequences, you decide on what you want to do. And in spite of being a practising Christian, and the church disagreeing with these decisions, that doesn't make me un-Christian, in the sense that just because I think I've got this belief, I hope it doesn't make me a bad person.

And I just hope that I do it for the right reason and not because I've got great aspirations for the child. So that's the reason why. One friend of mine, actually, did ask me - I think it was when, after the negative result of the PIGD - she did ask me why would I go through this procedure when I would have to do an amniocentesis anyway, and if the test, if the diagnosis proved to be wrong and I was carrying an unhealthy child, I may have to choose the abortion, why would I not just try to get pregnant and then make that decision? Which, maybe in theory, is a very
Previous Page
Next Page