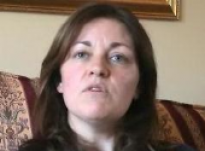 Brief Outline: For DTaP/IPV/Hib' Followed the recommendations of the health professionals. MMR decisions' Talked to their health visitor and a paediatrician and searched for information using the Internet, talked to friends in the USA, read articles in the media but it was talking to a health professional at Great Ormond Street that helped her to make her decision for both her children.
Background: At time of interview' married, two children, aged 5 years (daughter), aged 19 months (son). Parent's occupation' Mother- Housewife, Father- Business Advisor. Ethnic background' White-British.

A mother was unsure whether to give her daughter the MMR vaccination, but after speaking to her...

A mother was unsure whether to give her daughter the MMR vaccination, but after speaking to her...

View topic summary
SHOW TEXT VERSION
EMBED CODE
PRINT TRANSCRIPT
And then our little boy was born and I had the same reservations but again went straight back to this lady at Great Ormond Street. She reiterated everything she'd said before and also I was interested in finding out if there was any more data, has anything happened because there's 3 ½ years difference between the two. And she was just able to tell me exactly what the, the current sort of comment was on it and stuff and, and also it wasn't just her giving me the facts, she was also talking to me as a mother as well. She's got children of her own and she was talking to me from that perspective. So I kind of felt, unlike with our local doctor who I, you know, other people were commenting, “Oh they will just give you the party line,” I felt as if she was telling me exactly what all the facts were as well as the fact she was a mother and she was also being honest with me about how she felt about it.
But I think I really needed to hear the way that this lady spoke, it was very much a case of, you know, her comments seemed to be along the lines of that, you could give one child a ham sandwich and they'll be perfectly fine, you can another child a ham sandwich and they might have reaction to that. So there's always going to be this possibility that a small percentage of children might have a reaction, but like they might do to anything you might cook for them or something. But, that over-ridingly it's safe.
And she was, you know, very sort of from a sort of top overview telling me about the information that's coming from the States and various other countries and how many countries are actually using the MMR and how many years they've been using the MMR and that, you know, there is not a link, that, you know, and I think I needed to hear someone in her position saying, “There is not a link between the MMR and autism.” And, so I think that's, like I say, and I think it was having that initial conversation where she said that, that really kind of tipped me over to think, “Yeah, OK, I think we're going to go with doing this.”
Previous Page
Next Page