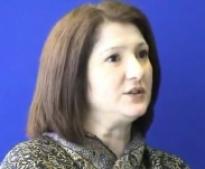 Age at interview: 31
Brief Outline: Both partners knew they were beta thalassaemia carriers. Second child born with beta thalassaemia major. Mother has had CVS in two pregnancies since, and would terminate the pregnancy if the baby was affected. Video and audio clips read by an actor and recorded in Mirpuri.
Background: Married housewife, four children aged 10, 9, 8 and 2. Husband unemployed. Ethnic background/nationality' Pakistani.

She explains the teaching of some Islamic scholars about the possibility of ending a pregnancy before the soul enters the unborn baby. (Read by an actor.)

She explains the teaching of some Islamic scholars about the possibility of ending a pregnancy before the soul enters the unborn baby. (Read by an actor.)

Allah forbid, if this was to happen to you again, if you're twenty weeks pregnant and you find out late, what would you do?

I have not thought out that I wouldn't let it go so far. If it does, I mean I have enough children, but even if it does happen, I think that would be too late. Because Muslims are not permitted, because the child has a life then [soul has entered]. The baby moves in the mother's tummy at about four, four and a half months. And in my calculations, I don't think anyone should do that. Don't let it go to that limit anyway. Eleven weeks is really nothing at all, I mean, it's just blood, doesn't have a life. The baby doesn't move in the mother's tummy. A baby of four, four and a half months moves its arms and legs. The mother can feel it. That's too late.

You said that it's not permitted in Islam. Did you get any information from anywhere about Islam?

The individuals are educated. They said that it is not a sin within eleven weeks.

Where did you find out from?

More than how many weeks?

Footnote' some Islamic scholars teach that termination for life-threatening conditions is permitted up to 120 days of pregnancy, at which point the soul enters the unborn baby ['ensoulment']. After that it is forbidden.
Previous Page
Next Page