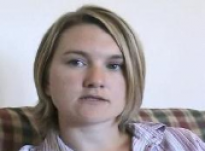 Age at interview: 31
Brief Outline: Her 2nd pregnancy' 20-week scan indicated serious abnormalities. Amniocentesis and scans identified Patau's syndrome. Pregnancy was ended by induction (no feticide at her request) at 24 weeks. Since then she has had another baby.
Background: Pregnancy ended in 1998. No of children 2 + [1]. Ages of other children at interview' 6, 4. Occupations' Mother - nurse, Father - warehouse manager. Marital status' married. Ethnic background' White British.

When she realised that her baby would not have survived long after birth she changed her views on...

When she realised that her baby would not have survived long after birth she changed her views on...

I mean, at first, when we first discovered that, you know, there's a problem with our baby, my instant reaction was 'Well I'll be going to term, because there's no way I could sign a consent form for a termination'. That was my instant reaction, but then as time goes on, and we agreed we'd talk about it every day, that we must sit down and have a conversation about it every day, and you know, agreed that we weren't, you know, we would just talk if we needed to say something.

And I think as time went on, and you are just, you know, looking into it more, your initial emotional reaction changes, and you start actually thinking about what the implications are for the baby, for our daughter, for us.
And I mean, our main - I mean obviously this is over several days, you know - we'd got to this decision and within this the amnio results came back. I think we had to wait 10 days, and the consultant who'd initially scanned us rang me with the results, which confirmed that, yes it was a T13 baby, which was actually quite reassuring because it gave us an answer. You know, your baby has got these abnormalities because they've got a chromosomal abnormality.
Plus it meant I felt that we could make a decision without sort of having to look into likelihoods and statistics, and whether they'd be fit for surgery at birth and all those kind of, this was, it was almost like saying, you know, your baby, unfortunately, is going to die. They'll die when they're born, and so we were, if you like, the decision was taken out of our hands. I felt it made it easy to make that decision.

She felt rushed into the decision to end her pregnancy (due to a foetal abnormality), but took back some control by deciding to allow the baby to be born alive.

She felt rushed into the decision to end her pregnancy (due to a foetal abnormality), but took back some control by deciding to allow the baby to be born alive.

And at this point, when we got the results we also had an appointment to go back to our first hospital to discuss with the obstetrician what we wanted to do. So we went to see him.

Unfortunately, I don't know whether he hadn't read our notes before he came in or what, but he was probably the most unhelpful professional that we met. He seemed very, he was like, 'Right, you've made the decision to terminate so let's just get on with it,' and, you know, 'Go home and forget about it.'
And in fact, we were wanting sort of more information from him and he said, you know, explained about taking the tablets 48 hours before you want to go in, and so he was saying, “So, if you want to take them now and come in, in 48 hours,” and I was saying, “No, you know, I need some time to think about this', and I was thinking more like, we'll be coming in, in 2 weeks' time.
He seemed, he explained to us that for some terminations you can have under scan, under ultrasound you can inject the baby's heart with potassium, if you like, to do the termination, and then you give birth afterwards, which for me was horrific and was just not an option.
I just can't imagine, you know, it was really, one for me, I didn't want to give birth to a baby that was already dead, to me that was even worse than the situation we were in. And to watch it on screen that happening to me just sounded absolutely horrendous, just cruel.
So when I said to him that I didn't want that, he seemed, he was almost like quite surprised because I was telling him what I wanted, rather than him telling me what was going to happen and me saying, “Okay.”
So I said to him I didn't want that. I said that I wanted to give, just to give birth and, you know. And the fact that I said to him that I wanted a couple of weeks to think about it. As well as the practicalities of sorting out baby-sitters. [husband's] parents were away on holiday so we had to wait for them to come home and things like that. And when I said to him, “I want to wait a couple of weeks,” his, his comment was, “But you do realise your baby might be alive when they're born?”
Which was like, 'Yes.' And that seemed to be a problem, “Well, that means you'll have to get a birth certificate,” and he didn't for one minute seem to think that I wanted, I wanted a birth certificate. I wanted my baby to be alive when they were born because I wanted them to die with me, and he didn't seem to have thought about that.
And, you know, I can understand that unless you've been in that situation you wouldn't think about things like that, but it seemed like he had a very narrow view of what happens. It's like, you've decided to terminate this pregnancy so 'let's just get on and do it and not think about it, go home and get pregnant again' sort of attitude.
And he didn't seem to grasp the fact that this was my baby, and I want this baby but I'd found myself in these circumstances, I want this baby to born alive.
Previous Page
Next Page