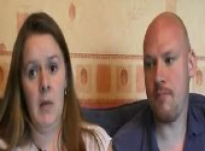 Parents considered the effect that having a sibling with microcephaly would have on their two...

Parents considered the effect that having a sibling with microcephaly would have on their two...

Mother' For me it was when the neurologist said that this baby will have no quality of life, and it will not know that it exists.

Father' It was the last time we went for an appointment, wasn't it?
Mother' It won't know that it's existing, and I just thought then - and we talked about it.
Father' She used the phrase, "even if the baby survives".
Mother' And I wouldn't want to put a child of mine through the suffering of dying. And we have a daughter, and at the time, two and a half, could you cope with a dying baby, and a two and a half year old? Is it fair to her? Is it fair to us?
Father' Well, they said it might not survive the labour, or even as long as that, anyway.
Mother' I'd have hated to have seen any child of mine go through any pain.
Previous Page
Next Page