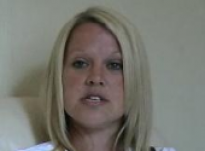 Age at interview: 37
Brief Outline: She had an early termination, 2 miscarriages and a normal pregnancy. Her 5th pregnancy was ended by induction at 21 weeks - baby had Down's syndrome detected by amniocentesis. Since then she has had another baby.
Background: Pregnancy ended in 2002. No of children' 2 + [1]. Ages of other children at interview 6, 1. Occupations' Mother - formerly legal secretary, Father - Joiner. Marital status' married. Ethnic background' White British.

She took control of how she wanted the birth to go, and thinks this made things easier for the...

She took control of how she wanted the birth to go, and thinks this made things easier for the...

They were very good, I mean they were just so kind. I'm very lucky in that respect because I've heard so many stories that hospitals weren't good, and that midwives and all, you know, the specialists and that, were not compassionate. But mine were, I was very very lucky.

But I also, what helped me was that I took control of the situation. I knew what I wanted, I knew exactly how I wanted it to go. I didn't ask them what I could do. I said, “I want to do this. This is how I want things to go. I want to see my baby. I want to hold my baby', you know, 'I want to take her down to the morgue. I', you know, it was all “I” and 'me and [husband] obviously, you know, and [husband] was like, “Do whatever you want to do, I will go along with you”. You know and he was fine.
So I knew exactly what I wanted, which helped I think because they didn't have to sort of tiptoe around me thinking, “Am I doing the right thing?” you know. I knew, I told them exactly or asked them, you know, to sort of help me get what I wanted. So they were, they were really good.
So I went in on the Tuesday, and what they do is they give you three pessaries, which induces the labour. So they gave me the first pessary on the Tuesday, which actually takes quite a, well, 24 to 48 hours to start to work. So you have that, in some hospitals I know you stay, they said that I could stay but I wanted to come home. So I came home and then went back two days later to actually be induced and have the second pessary and the third pessary. And then that was when I gave birth to [the baby].
Where did that happen? Where did you give birth?
I was actually asked whether I wanted to go on to a side ward, a general ward, and do it that way, have a private room obviously. They said, “Some ladies want to go onto maternity, some ladies don't”. And I said, “Well, I'm having a baby, and I'm sure that [baby] would want to be with other babies.' So I went onto the maternity ward and they gave us a room of our own with a double bed and everything - a family room they called it - so we went in there.
I had the first pessary at 10 o'clock and they, I mean they were really good, you know, plenty of sort of tea and biscuits. And then the next one was at 1, and by this time the la-, the labour was s-, quite sort of strong and you know it was moving on [coughs]. I had the next one at 10, the next one at 1, and she was born at half past seven in the night time. Yep.
And when, I mean, at what point did she die?
She actually died in my arms. They did say that, this was quite strange, because they explained all this to me, they were all very very good, very thorough, and I asked all the questions that I needed to know because I didn't want to feel that at any stage that I would regret anything or wish that I had have done something but I didn't. Because I knew that living with the guilt that I was going to was going to be hard enough, but I wanted to be happy, or as happy as I could be, that things had gone exactly the way I wanted them to be, go.
So I said that I wanted her passed straight to me, that I wanted her to stay with me for the night, all these things. So when she was, when she was actually born they said, “Some babies do actually take a first breath”. Because there is actually another way that you can do it as well. Some hospitals can actually inject the baby's heart, which will actually, the baby will die then inside the mum's tummy, and then be delivered that way, so the baby will be born dead obviously. But I didn't want that. So then she just died in my arms. Yeah,
Previous Page
Next Page