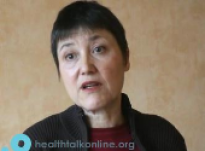 Age at interview: 52
Age at diagnosis: 52
Brief Outline: Di was diagnosed with DCIS in 2003 after her first routine mammogram. She had a mastectomy and LD flap reconstruction six months after diagnosis.
Background: Di is a married teacher with two adult sons. Ethnic background / nationality' White British

Di felt a bit alienated when she decided to go against her doctors advice to have an immediate...

Di felt a bit alienated when she decided to go against her doctors advice to have an immediate...

View topic summary
SHOW TEXT VERSION
EMBED CODE
PRINT TRANSCRIPT
The day that we received the results, I was told that I had DCIS and they explained very briefly what it was. That technically it was pre-cancerous which was a relief and in the next breath they said “So we’re going to offer you a mastectomy,” and that was appalling. Because you assume that if something was pre-cancerous, they can do what I believe they do with cervical cancer and you know just zap those cells.
And I must say the bottom of my world dropped out at that moment, so that was a very difficult moment, from having a month earlier felt completely clear of any risk at all to being offered a mastectomy for something that wasn’t even truly invasive cancer as far as they knew.
And in that fortnight I did a lot of research too on the Web about the condition and realised that it wasn’t cut and dried, that some people were beginning to ask whether surgery was necessary always but that the evidence wasn’t there, no one could actually answer my questions, even when I went back for the subsequent appointment I had loads and loads of questions but they could not be answered.
And that made it even more appalling to think I was going to have a mastectomy when I couldn’t make a clear choice because the answers that I needed - about how long would it take for this to develop, how dangerous are these cells, what is exactly the spread in my breast - none of those could be answered. They could only say “We have found what we’ve found, there may be more but we can’t tell until we’ve removed your breast and we can’t tell whether it’s invasive until we’ve removed your breast.” And that’s appalling and in fact I refused at that point to go ahead. I felt I’d been well railroaded into a surgical procedure and so I said I would wait. Which I don’t think was approved of really, I felt a bit alienated then because people don’t step off the tracks and I said that I would.
So at that point I said that I thought I needed thinking time and sort of set myself a target of getting to Christmas and beyond because that would have given me three or four months to do some more research to think things through to see if I could put my faith in any complementary strategies, to talk to people. And to see a counsellor because I felt absolutely floored by the diagnosis and I thought if I went into and prepared myself mentally then I could, because at that time I was talking about this in terms of, I was talking about mastectomy in terms of a mutilation and I couldn’t see it as, I objected to it being called a treatment, to me it wasn’t a treatment, it was almost the opposite.
Previous Page
Next Page