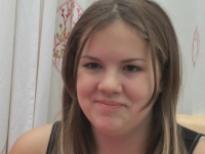 Age at interview: 13
Brief Outline: Lara completed the HPV vaccination programme for girls aged 12 to 13 years when she was in year 8 in 2013. Lara received the Gardasil vaccine which provides protection against cervical cancer and genital warts. She feels that the information leaflet she got at school gave her enough information about the health risks of the papilloma virus and the importance of vaccination.
Background: Lara is in full-time education. She lives at home with her parents and sister and she is a keen rower. Ethnic background: Argentinean/British.

Lara completed the HPV vaccination programme for girls aged 12 to 13 years in school year 8 in 2013. At school, Lara was given was an information leaflet and consent form to take home to her parents. Lara and her friends read the leaflet and talked about why it was a good idea to get the jabs. She feels that the leaflet provided enough information about the health risks of the papilloma virus and the importance of vaccination. The dates when they would receive the jabs were also provided.

Lara received the Gardasil vaccine which provides protection against cervical cancer and genital warts. Each time, before they got the jabs, the nurses asked questions about their general health and if they were pregnant and explained possible side effects of the vaccine like dizziness and feeling sick. Lara felt reassured by the care and support given and thinks that the immunisation day was well organised with one nurse and a student nurse at each table attending each student.

Lara didn’t have any of the bad reactions the nurse talked about but her arm went numb for a bit after she got the jab. It happened each time but it was a short-lived feeling.

Lara says that the HPV vaccine provides protection only against cervical cancer and genital warts and that young people need to use condoms to protect themselves from other sexually transmitted infections and unwanted pregnancies.

Lara thinks that the leaflet gave all the information she needed about what the HPV vaccine is for. She thinks it’s difficult to organise an assembly in mixed gender schools.

Lara thinks that the leaflet gave all the information she needed about what the HPV vaccine is for. She thinks it’s difficult to organise an assembly in mixed gender schools.

View topic summary
SHOW TEXT VERSION
PRINT TRANSCRIPT
Well at the beginning of the year we got a letter, just the girls in our class. And we had to take it home and read it with our parents and they had to sign and put all the information like our birthday and how old we are and our gender. So about Oct, about the end of 2012 we had our first jab and we just, they didn’t talk to us about it in assembly because it’s a mixed school.

Do you think that would have been a good thing to have someone there, a nurse, explaining things to you?
It would but I think it would be quite complicated because they would have to take out like all the girls from each class because each class is mixed so it would be quite hard to like get all the girls out of one class and then talk to them and have to go all the way around the school finding all the classes. So it would be just easier, I think doing the leaflet was quite good because in that way we could read it ourselves and discuss it instead of having someone else tell us it and like not being able to discuss it with our parents because they tell us directly.

Lara is aware that the HPV vaccine, Gardasil, protects against cervical cancer and genital warts.

Lara is aware that the HPV vaccine, Gardasil, protects against cervical cancer and genital warts.

View topic summary
SHOW TEXT VERSION
PRINT TRANSCRIPT
Well it [HPV vaccine] protects us against cervical cancer and genital warts and stops us from getting like HPV and so that nothing happens in the past, in the future.

So did you know much about genital warts or?

And what about genital, sorry, cervical cancer?

I knew about that yeah. I knew that like you could get it and I knew that if we did have the jabs we wouldn’t not have it at all but we would be a lower chance that we would have it.

So that was the information you got from reading the leaflet with your friends?

And how did you feel about getting the vaccine?

Lara talks about what nurses do during an HPV vaccination session and how she felt.

Lara talks about what nurses do during an HPV vaccination session and how she felt.

View topic summary
SHOW TEXT VERSION
PRINT TRANSCRIPT
So we just went into the hall and they sat us down and they asked us just a couple of questions like ‘Do we feel ill? Have we had any jabs previously?’ And like, just questions like that. And then after they gave us the jab and we went back to class after a bit.

And then the next jab was around January and, yeah the beginning of January and we did the same. They asked us the same questions and…

So which questions did they ask you? If you have had jabs before or?

Yeah they have. They asked if we had had jabs previously like in this year and they asked us if we felt ill. If the last jab we had made us feel like nauseous.

And questions like that and about our birthday and stuff. So then we had, we took…

They asked us one that was like, ‘If you are pregnant’ because you can’t take it if you are pregnant. And then I think that was it. And then after we just left if we felt ok and we didn’t feel like dizzy or anything if the jab like hurt us in any way we could just leave but if we did feel a bit bad then we had to stay there for a bit. And then in March we went in again and we did the same thing. They asked us the same questions and we. They asked the same questions and at the end they gave us a band to take home to show that we had had the HPV jabs.

Part B
Well when we went it they [nurses] told us that as well, when we went into the hall where they were sitting but also when we sat down they like, they told us that, ‘We’ve done this many times to many other students’. And that they have the certificate and everything just to make sure if we have any worries that they don’t know how to do it or something like that.

Ok so they. Do you remember anything else?

About the nurse or the trained nurses?

And they had assistant nurses next to them and I think they were learning how to, like learning how to do it and like how to treat the students just in case they’re nervous or something.

So you had sort of trained nurses and assistant nurses. How many in total were there?

There was about six tables or seven. I can’t remember exactly. They were spread out along the hall and there was a special place where if you felt very faint then you could go behind there and just like sit down. But…

So each table has a trained nurse and an assistant?

And it has all the equipment and it has a bucket where it disposes of the dirty needles and it has, and she a bag or something like, a box I think it was of needles that have been cleaned and no one else has used them or hasn’t touched anyone else’s skin.

View topic summary
SHOW TEXT VERSION
PRINT TRANSCRIPT
Now tell me about the vaccine itself. Did you have any reaction to it? Were you feeling nauseous or feverish or?

Well the first one I was fine with it. It’s just, my arm, you’re arm goes numb after but that happened in all three of them so it wasn’t anything.

For about an hour but like it, it wasn’t hard to write or anything because I write with this hand and they gave it on this hand but so it was fine. But the second time I felt a bit like a headache and then the third time I felt a bit dizzy but I was fine because my friends were there so they could help me.

Ok but how often did they give you the vaccine?

Every like, like two or three months they would give it to me because the first one was in around November and October. I think October. The second one was in January and the third one was in March, so like about three, two-month interval between each jab.

Lara says that, if you are going to have sex, you need to use a condom.

Lara says that, if you are going to have sex, you need to use a condom.

View topic summary
SHOW TEXT VERSION
PRINT TRANSCRIPT
I think you should have intercourse with a condom even if you do have the jabs because it’s not protecting you completely. It’s just lowering the chances that you don’t catch genital warts or HPV or cancer but. So you should always protect yourself unless you want to start a family.

But what do you think about the idea that some parents have that it is better not to give their teenage daughter the HPV vaccination because the girls might think that they can go and have sex basically.

Well that’s probably worse because it’s more likely that they do get the HPV than not getting it because it’s protecting you against it so if they did go and have sex there would be a much lower chance that they did get it then than if they didn’t get the jab at all.
Previous Page
Next Page