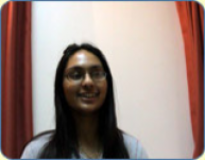 Age at interview: 25
Brief Outline: She participated in the activities of a Gay and Lesbian Youth Group. One of the main tasks of the group was to provide awareness about sexually transmitted infections. (Played by an actor)
Background: Young Scottish lesbian woman who lives with her partner. She works part-time and they shared a house with another friend. (Played by an actor)

Has discussed with her partner the possibility of having children with a male gay couple. (Actor)

Has discussed with her partner the possibility of having children with a male gay couple. (Actor)

My partner and I, we have talked about having children. We've got some friends, we've got this - I won't say his name - but we've got this couple, like a male couple and one of the boys, he's an only son and he's the last one in his family so you know when he dies he's gonna be the last of his.. so if he was to have kids then we could carry on the family. So we do talk about it but whether we would actually do it.

So have you had serious conversations about it, or has it just been 'oh well I suppose we could always,' - ?

Fairly serious but not, not serious, nobody's made a decision and we're all still young so it's not something that we have to sort now.

Remembers when she first started participating in a support group and the activities they used to...

Remembers when she first started participating in a support group and the activities they used to...

And how did you find out about the youth group?

It was a friend of a friend told me about it and he was like 'I went, I didn't really like it but you know, but it might be good for you,' sort of thing, I was like 'OK.'  So he told me, he told me the name of the group. He didn't have the number so I found the number and gave them a call.

I see. And how was the youth group different from the the club?

It wasn't, I didn't enjoy it, I was pretty much scared doing it but when I left I felt good about having been there. So I thought I'll just keep going back and made friends.

So could you tell me a bit about where you got this information and what you think of it?

Aye. At youth group they do, they do evenings for, sexual health evenings where you have to do funny things. Like there was one time we did, we was, all the STDs were put in a hat and we had to pick an STD out and then go and research it and then dress yourself up as it like, like a fancy dress box. That was quite weird

That sounds challenging for some of them! - can I ask which, which one did you get, as it were?

So I had a clowns wig on, a red clowns wig, that was the itchiness, and a yellow scarf, that was discharge. And, I can't remember what else I had but we had to dress up as the symptoms.

Describes how she told her mum that she was gay and her mothers' reaction. (Actor)

Describes how she told her mum that she was gay and her mothers' reaction. (Actor)

So the early stages of this current relationship?

No it was longer than a year ago, it was like the middle of one. It was aye, so I went home with the intention of telling my mum and I got her a wee drink and I got myself one and then I got her another one.

And I, what we were, I don't know what we were talking about, maybe there was a gay character on the telly or something, it was something like that and we got into conversation about it. And mum was like 'So are you gay then?' and I was like 'Yeah I am.'  And she said 'Oh I'm so relieved, I thought you were gonna tell me you were a drug addict, I knew you were gonna tell me something.'  She thought I was gonna tell her I was a drug addict. She must have known that I was building up to tell her something and just thought the worst.

And then how was she, how did she react ?

We had that conversation and she' I was like 'But you're not a wee bit upset because it means you're not gonna have any grandchildren, I'm not gonna get married,' she was like 'Och you needn't do that, that's fine,' you know, blah, blah, blah.

She was, so I said 'OK, OK,' so we both went to bed and that was all fine and dandy.  And the next morning I was you know, 'are you still alright' because I was expecting her to be a bit upset you know.

You know like her expectations would have changed and she was like 'No I'm fine, I'm fine.'  So I thought, I went back, I came back here, then a week or so later she sent me a wee letter saying that she was happy for me. So that was nice.
Previous Page
Next Page