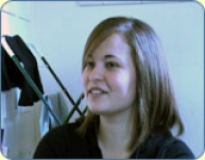 Age at interview: 19
Brief Outline: She has had first hand experience of overcrowded family planning services in an inner city area.
Background: She is having a gap year before going to University and was living in a shared house and working full time.

Indicates that initially she was very aware of the need to use condoms and that later on she...

Indicates that initially she was very aware of the need to use condoms and that later on she...

View topic summary
SHOW TEXT VERSION
PRINT TRANSCRIPT
I mean at school I was always very aware of the fact that I would never ever sleep with a man without a condom it was just 'god that's really silly', but I think as you get older you start to lose that, I started to lose that a little bit and I think I would realise now that that is not a good thing to lose, to be like, oh you know that'll be okay, even if I am on the Pill, it's just that I should be.

Sexual health services are very difficult to find in the inner city area.

Sexual health services are very difficult to find in the inner city area.

View topic summary
SHOW TEXT VERSION
PRINT TRANSCRIPT
It is very difficult to find a Family Planning Clinic that will, that you're in the catchment area and that will be open on the day. Because the one that I go to is only open on Fridays from 12.00 till 2.00 and basically you have to get there about 11.30 to 11 o'clock to get to the front of the queue to make sure that you're seen and that.

When you say the clinic, is it a Family Planning or a Brook Clinic?

It's a Health Clinic that has a Family Planning drop in centre on a Friday lunchtime but that's the only thing basically that's available because all the doctor's surgeries are full around here, you can't get on the doctor's lists for about six months and it's just really difficult to get...

To actually guarantee that you can get in, it's just, I mean, that's the one that I'm in the catchment area for, the other ones won't see you if you're not in their area and they also don't do, it's sexual health, they don't do the tests for sexually transmitted diseases at this Clinic. They won't do that, you have to go somewhere else to do that and because I want to get that done but working full time and it only being open on a Friday it's really difficult to.

It's really difficult, I mean we, I had to get the morning after pill and my friend and I phoned up the National Health Line, to get numbers and all of them were either not answering the phone or none, there was no Brook mentioned at all, it was all Health Clinics that you had to go to and kind of they were all full or they weren't answering the phone or they were really busy or just kind of, so I had to go to Boots and pay '23.00 for it and I realised that it was time to stop messing around and being silly.

So it is really a big problem?

Because I've got to go again to get a repeat prescription on Friday and it's basically, I'm aiming to turn up there about quarter past eleven to make sure that I can get seen and get out because it's a really long wait to be seen. The advice was good when I got it, I mean the doctors were really good.

But you have to spend a lot of your time if you want to sort of, in order to be responsible?