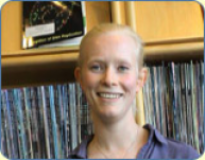 Explains how media depiction of sex makes you think that it has to be amazing every time you do...

Explains how media depiction of sex makes you think that it has to be amazing every time you do...

And let's face it, we laugh at the boys that we know and that kind of takes the pressure off us as well.

So it is a learning experience like anything else?

Yeah I guess so, and it's fun if you can chat to your friends about it and you don't want to make anything too serious.

It's really good if you've got friends that you can talk to about it and I think most people do.

What about girls talking to their boyfriends about it?

Yeah, talking to your boyfriend is a bit more difficult because there's kind of pressure on both of you to do it well I guess. Especially if you say to a boy 'oh that wasn't so good', then I don't know, they might get defensive or' I guess it depends how close you feel to them really.

I think more sex can be great and often is but isn't always, and so it would probably be good if that message was put across a little bit more

Yeah I actually think that we need to educate men more, I mean there is a lot of pressure on girls'

You say educate the men, about what specifically?

Well I think that men should probably know what their girlfriends need to know. Especially about like the contraceptive Pill. Like their girlfriend knows that if they miss a pill and take it 12 hours, more than 12 hours late then they should not have sex for a week and guys need to know that too. It would take some of the pressure off the girls having to remember it every day if the guy could share that.

And I guess they should know when to take the after-sex pill, that you can take it up to 72 hours afterwards. And maybe the different safety risks for using the condom and the Pill and sexually transmitted diseases and the symptoms that go with those. If they just knew a bit more then it would take the pressure off the girl.

So do you think you could start educating your boyfriend?

Yeah, well I think I already have. Like sometimes he reminds me to take a Pill when I've forgotten and so that's quite nice and it just makes me feel like he's taking part in the contraceptive side of our sex life as well, so that's good.

Yeah he knows more about it and that's really helpful and so yeah, I do try to educate him.

Describes her experience of going for a check up at the local GUM clinic. (Actor)

Describes her experience of going for a check up at the local GUM clinic. (Actor)

I made an appointment and just went in and they take swabs and I don't remember if they peer inside but probably. And then there is the HIV one, and I can't really remember, but I think there was a needle involved' In fact, yeah I think they definitely took some blood. I can't really remember very well, it wasn't particularly scary. I mean you just grit your teeth and '

You saw a nurse at first and then she went through it with you?

Yes, she told me what they were going to look for and then they did all the tests. I can't remember feeling worried particularly, it was fine and it didn't even take that long.

Describes a pregnancy scare and how her boyfriend was reassured by searching on the internet. ...

Describes a pregnancy scare and how her boyfriend was reassured by searching on the internet. ...

I've had my period come late and I was really worried that I was pregnant and stuff, that's happened once, yeah.

Did you tell your partner?

Yeah, I did tell my boyfriend but I think that was probably a mistake. He just got really worried. I mean I was living in England and he was in Ireland at the time and he phoned me up and I was determined not to tell him but he could just tell from my voice really, that there was something wrong.

So I told him that my period was late and he just stressed out. He was really, really worried and ended up going on the Internet to look up information about it and called me back and said 'oh its alright you know', you know he'd worked out what it was and I'd taken the after-sex pill that month and so he said that he'd found out that one of the effects of that was that your period might be late, so that was very reassuring. My period came on like several days later and so if I hadn't of told him, we could of avoided a whole lot of stress really.

So he went on to the Internet?

Prefers to talk to her mum about relationship issues, but not about sex. (Actor)

Prefers to talk to her mum about relationship issues, but not about sex. (Actor)

Yes, and even sort of passing comments about sex as well, I don't really want to go into a detailed discussion. But yeah, it's really, really good when you can talk to your Mum about things, especially because your Mum knows a lot about life and she's got your best interests at heart as well. So those are the two main things for having a confidential discussion with her I guess.

I mean I could talk to my friends and they would be willing to listen, but they're all wrapped up in their own worries and I'd be the same if I spoke to them as well. I don't know, my mum's just really willing to listen to me for what I am.

Before I went to Uni I did talk to my' well, I did worry about when I should start having sex and whether I was being silly not wanting to start straightaway. Whether I should just go for it, I mean it wasn't really a big deal or it shouldn't really be a big deal, but you just worry about whether the guy is being faithful and whether he likes you as much as you like him, so I think those are the main things.

And these are the kinds of things that you talk to your Mum about with no problem?

Yes, well I mean when I worry about why he hasn't called, then my mum just tells me to stop being silly. So I don't like to tell her things like that, but I tell my mum the big things and my friends the little things, because you don't like your mum to tell you that you are being stupid.

And what about your Dad?

No, I want my Dad to think that I'm completely innocent and pure and not to worry about me. He would just tell me that none of the boys are worth worrying about and that I should dump them all anyway! So no good at all.

Yes, I mean he'd just tell me that I was wasting my time with all these boys.
Previous Page
Next Page