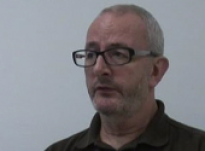 Age at interview: 57
Age at diagnosis: 54
Brief Outline: John's problematic urination led to a PSA test and DRE. A trans-rectal biopsy detected cancer and he decided to have brachytherapy but a later trans-perineal biopsy indicated more advanced cancer and he then had a robotic laparoscopic prostatectomy. He later had a 'male sling' to treat his incontinence.
Background: John is a married writer with one adult child and his ethnic background is White British.

The operation went well but John thought that the hospital environment and organisation was ...

The operation went well but John thought that the hospital environment and organisation was ...

The operation was a great success, it was, I thought the surgeon was fantastic, everything was really great, my PSA since then has been, undetectable, the hospital treatment wasn’t great, the ward was, chaotic, it was very difficult to tell who was what, the cleaners wore the same uniform as the surgeons, but you know, you’re there to be treated and you go through it and it was just great to know that it was out of my system, it was a really good feeling,

John had a catheter for about 10 days after his surgery. Once that was removed he progressed...

John had a catheter for about 10 days after his surgery. Once that was removed he progressed...

Post operation I had a catheter for about ten days, again that was a little bit chaotically organised, I know other people who’ve been through the same experience and they’ve come home with pads, and catheters and a stand to put the catheter on at night, and I had none of that, and nobody really seemed that bothered about helping out, so I had to kind of sort it out for myself, the catheter I hated, it was very uncomfortable, very difficult walking around, I was able to walk, reasonably, the day after I got home, I went out for a short walk, walking very very slowly, quite unsteady, but things improved fairly rapidly and once the catheter was removed then I progressed fairly quickly.

After surgery John experienced some incontinence. Two years later he still had problems so had a...

After surgery John experienced some incontinence. Two years later he still had problems so had a...

The two principal side effects were firstly, incontinence I had to wear incontinence pads, I was wearing quite large pads, and getting through a couple a day, two or three a day to begin with,  things improved over the course of the first six months I suppose, I was doing pelvic floor exercise, perhaps not as consistently as I might have done but they helped, but then it’s, it reached a plateau, I was, after that point I was going back to the hospital every six months, for a check up which consisted of a PSA test and a chat about my condition generally, and after the first two or three perhaps of those assessments I had... the guy I saw had been trained and was operating on male slings which reduce incontinence and he thought that I was an ideal candidate for that, so I had a test for that, which was basically to see the capacity of my bladder and the amount of leakage, and they decided that because I wasn’t too severely incontinent that I was a good candidate for that so I was put forward for that second operation, which took place just about two years after my prostatectomy. I had the operation under, I had the choice of local anaesthetic or a general anaesthetic, and I chose a local because I don’t like anaesthetics very much, the operation was quite straightforward, quite quick, I went home the following day. It was incredibly uncomfortable, the operation is basically you’re, you’re cut open, right underneath, right underneath the bit you sit on, which made it very difficult, when I got home, very difficult to get comfortable, difficult at night, difficult when you are sitting down, and difficult walking, the first couple of weeks were pretty uncomfortable, it was, I would say it was, that the operation was worth doing because the incontinence was reduced, but I had rather hoped that I’d be completely free and in control of, that aspect and free of having to wear pads, but it wasn’t, things were a lot better, I wear one smaller pad now, and I don’t have to worry so much about it, I don’t have to worry about making sure that I’m within reach of a loo so I can change my pad when I go out in the evening or anything like that, so from that point of view it’s been very beneficial, not as good as I would have hoped.

John explains that his incontinence may still improve as his 'male sling' gets stronger. He finds...

John explains that his incontinence may still improve as his 'male sling' gets stronger. He finds...

View topic summary
SHOW TEXT VERSION
PRINT TRANSCRIPT
And have you been told that that will get better, or will that be the level of incontinence?
It [urinary incontinence] may still get better, because the, the way the male sling works it’s, I believe it’s attached to the pelvic bone at either side, and then it just flops underneath the bladder, but in the course of putting it, or in the course of fitting it, there is scar, operation surgery damage which creates scar tissue and the scar tissue actually [lights go out] strengthens the sling so that over the course of time the sling actually gets stronger.
The sling gets stronger?
The sling gets stronger, so there is hope, I’ve been told that over, perhaps the first year, there, there is certainly a possibility that things will get better, and I’m trying to help myself a bit more now and doing pelvic floor exercises which definitely do help and I notice that if I go a day or two without doing the exercises, then things get worse. So I really should be doing them several times a day, and I should be drinking less coffee than I do, but I like coffee and like to have a pint sometimes in the evening, and one puts up with the consequences.

After his robot-assisted laparoscopic prostatectomy John was impotent. He tried Cialis, and a...

After his robot-assisted laparoscopic prostatectomy John was impotent. He tried Cialis, and a...

The other side effect of my prostatectomy was loss of sexual function, and I think that, seemed to be more, more a problem for the people at the hospital than it was for me, I mean I’ve been married a long time, my wife and I have a very loving relationship, but I mean physically, we’re kind of not all that bothered, so neither of us felt it was a major problem, but the hospital tried me out with Cialis which is to try to increase the sexual function, and with a vacuum pump to encourage blood flow into the penis, and I was, to be honest, rather half-hearted about the whole thing and I’ve given up with all of that, now, and I think, that probably gets us up to pretty much where I am right now.