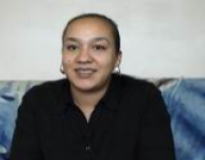 Age at interview: 26
Brief Outline: First baby. Experienced sickness in pregnancy. Felt unsupported during labour (which was induced) and disappointed that some birth choices did not happen as she would have liked. More of this interview can be seen on the Healthtalkonline antenatal screening site as Interview 34.
Background: Children' 1, aged 17 months at time of interview. Occupations' housewife/student. Marital status' single. Ethnic background' Black British.

She went through a birth plan questionnaire with her midwife but could not make real choices.

She went through a birth plan questionnaire with her midwife but could not make real choices.

View topic summary
SHOW TEXT VERSION
PRINT TRANSCRIPT
Did you feel during pregnancy that you were helped to think through how you'd like the birth to be? Was that discussed with the midwives?

Hmm, yes, but brief, it was really brief. How do I want to give birth? Do I want an epidural? I was offered an epidural from like day dot, but me not liking needles turned it down. And I think if anything that was what was pushed onto me, more than anything else. An epidural was the most frequent word used [laughs] when it came to labour terms.

Had you got a written birth plan? You know, things that you wanted to happen, things you didn't want to happen?

Yeah, yeah. I had one sheet, and basically I had to write down who I wanted as my birthing partner, how did I want the birth, did I want music. But the form kind of went into "Did I want music? Did I want ' - it specified something else as well, something like therapeutic - but the midwife was like, 'You get offered that, but it's not really like that. You either get the bed or you get the bath, you don't really have music and candles.' And you know, she basically put it to me like that, it was one of the two and it's not really cosy, that's the kind of impression. And it wasn't. It wasn't that cosy, it was the bed, and I wasn't allowed to move to a comfortable position that I thought was comfortable. I had to stay sitting down, sort of thing. So it wasn't good. At first I could stand up but where they had the monitor thing over my belly I had to sit upright. And it was like, "I want to lie down," and she was going, "No, you're going to pull the needle out and I can't hear the baby," and it was just like, "Sit up and shut up," sort of thing.

Did they ask you about that, when they were talking through the birth plan, whether you wanted to be monitored?

So it wasn't offered to you as an option?

And it sounds like this is a sort of form that the have that they fill in with you?

Yeah, it's just a standard form. I think I filled, I remember filling that in myself and bringing that back to like my next appointment basically, and going through with her and she basically said oh, kind of like, "Oh well, you can't have that person' or 'You can't have too many people," she said. "You can only have one," and then that turned into two. And I wanted my mother-in-law there as well, or my mother-in-law wanted to be there as well and basically I had to say to her, "Well you can't," because I wanted my partner and my best friend there. So there was a little over that as well but...

So kind of you ended up feeling that some of the things you would've chosen didn't happen the way you wanted?

The midwives changed shift several times during her labour. She would have liked more continuous...

The midwives changed shift several times during her labour. She would have liked more continuous...

View topic summary
SHOW TEXT VERSION
PRINT TRANSCRIPT
I just feel like I should've had - but I suppose because my labour was so long - well, my waters broke Tuesday night and I didn't have him till Thursday night but that was after they induced me on the Thursday evening because my, I wasn't dilating. So I had midwives like [laughs] coming and going, and every midwife I had was, "Oh, we're going to have a baby and blah, blah, blah," and then they'd be coming back to say in four hours' time, "Oh, I'm going home now, bye." And it was like, "Oh no, don't leave me, I'm having a baby," and they're like, "No, this one will look after you." And it kind of went on like that for the couple of days. So it wasn't very personal. It was more of a "You alright? Let me just check you over. Okay, see you in a little while," and they went, sort of thing. I suppose I didn't mind it at the time because I was with my partner and my best friend, so I didn't feel that I being just, you know, I don't, I didn't feel like I was just being left to get on with it because I had them two there to support me. But I can imagine if I was in there by myself and had exactly the same treatment, I think I'd have been a mess, because they do leave you for a long while, they do - unsupervised and that.