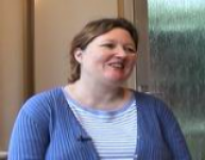 Age at interview: 38
Brief Outline: Seven and a half months pregnant with twins conceived by IVF. Would have liked antenatal classes designed for people having a multiple birth. Hospital birth planned. More of this interview can be seen on the Healthtalkonline antenatal screening site as Interview 14.
Background: Children' pregnant with twins. Occupations' Mother- lawyer, Father- teacher. Marital status' living with partner. Ethnic background' White British.

She was expecting a caesarean because both her twins were breech, but now one has turned and she...

Show in context
SHOW TEXT VERSION
PRINT TRANSCRIPT
So what are your plans for birth at the moment? You said you'd moved away from the caesarean as a kind of..?

Well, I had always assumed that I would have a caesarean, really. And so I was quite shocked when the last scan was that the baby had turned round. And that was quite alarming really, because I hadn't psychologically prepared myself yet [laughs] for a natural birth. But, and again I'd sort of taken the approach that, that whatever, I didn't have a sort of particularly strong view against a caesarean or in favour of a caesarean. But that the reality was that however the babies were going to be placed, that was going to dictate what it was. There was nothing I could do about it. But I had in the back of my mind always thought because it was twins that I probably would have a caesarean. So I've had to sort of re-think now, and get my head around the idea that it's not. And that's kind of quite a difficult thing, because the advice that the consultant's given me now is that a vaginal delivery would be, would be fine even if the second baby is breech, so long as the first one's head down.

But that I should have an epidural, because there are, there's likely to be intervention with the second baby, either to turn her if she's not the right way or to, if she's going to be born breech they'll have to have, they usually have a forceps delivery. And so that all sounds a bit horrendous, but again I'm going for an, to see the consultant next week on Monday, where we'll get a better idea. Although ironically having had all of these scans up until now, she said that I don't need to have another one, which would seem like, now I feel very indignant about it because I've got used to having them. And at this crucial stage she's telling me I don't need to know how they are and what they're growing like and everything.

Because the information they give you is obviously again to say that they're, that everything's going fine, but they also can tell you how much they weigh, which is quite a sort of factor with twins because of the risk that they might be small. And so I'll feel that when I go on Monday I'm going to say, 'You know you said I don't need a scan - can I have one?' [Laughs] Just to, just to see how they are. But, yeah.

Right, so all a bit up in the air at the moment.

Yeah, up in the air, that's the best way to describe it.

Has that made it difficult to kind of discuss like in antenatal classes with other parents what you might do, knowing that you've got these special circumstances?

Not really, no. Well, I mean, I suppose I've only, I've been to two classes and I also went to yoga, one session of yoga, antenatal yoga, where we had a lot of discussion about what was what, and up until, and all of that was before the baby had turned. So I've always had the discussions with people on the basis that I was assuming I'd probably have a caesarean. And most people that I've spoken to are very, are keen to have a natural birth, whereas I've been much more ambivalent, so. And especially in the yoga class, the teacher there was very keen to sort of, to be saying, 'You know, you don't need to be too anxious about births, and they do have successful twin deliveries at the hospital', and she was aware of people who'd recently had twins there without any difficulty.

There used to be special antenatal classes locally for women expecting twins, but the person...

Show in context
SHOW TEXT VERSION
PRINT TRANSCRIPT
And I was surprised at the extent to which there isn't really very extensive provision of antenatal classes. Because I had thought that you would go to classes for quite a long time, and that would be your opportunity to meet other mums and things like that, because having, I mean, working full time, I don't know a lot of local people in that kind of way. And I certainly don't know many people who live locally with children. But it seems that quite a lot of antenatal classes don't take place. And they don't have the staff to run them and they've had no specific availability of any antenatal classes about twins, because the person that they had, has gone, is not there anymore who was doing twins. And I think that's a bit of a shame. I think that that does mean that there is more of a gulf for me in terms of it being a medical process, as opposed to something more sort of normal and part of, just part of your life, because there's quite a gap.