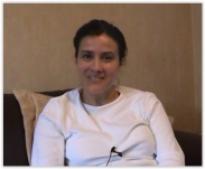 Age at interview: 37
Brief Outline: After four miscarriages, baby in fifth pregnancy diagnosed with heart condition. Mother (who is diabetic) had pre-eclampsia and emergency caesarean. Severe sickness in every pregnancy. Interviewed during sixth pregnancy, and again after a stillbirth at 36 weeks. More of this interview can be seen on the Healthtalk antenatal screening site as Interview 29 and on the Healthtalk pregnancy site as Interview 60.
Background: Sarah is an office manager and her husband a printer. They had one child aged 4 at time of interview. Ethnic background: White British.

Tests showed that Sarah had protein in her urine samples over several weeks. She was admitted to hospital and soon developed more symptoms, such as headaches and visual disturbances, as well as very high blood pressure.

Tests showed that Sarah had protein in her urine samples over several weeks. She was admitted to hospital and soon developed more symptoms, such as headaches and visual disturbances, as well as very high blood pressure.

View topic summary
SHOW TEXT VERSION
PRINT TRANSCRIPT
​Well, I’d always had, because they check your protein and your blood pressure and everything throughout the pregnancy, I mean, I’m quite lucky that I’ve got a normally low blood pressure. Well, I’m told I’m quite lucky that I’ve got that, anyway. But around about 30 weeks I started swelling. My legs and my feet swelled and I just started feeling even more generally unwell than I had done the whole of the pregnancy. And they, they, I’d had protein in my urine pretty much for about ten or eleven weeks before that. And I remember going in one day for a check-up, seeing the obstetrician, and him saying, “Oh, we’re going to have to take you in.” And I said, “Why?” and they said, “Well, your blood pressure’s shot up, you’ve got protein in your urine and we think you’re getting this condition called pre-eclampsia, which I’d heard of but not really taken much notice of, because I thought, there’s no way, again, that it can happen to me. So they brought me in, and it’s really funny because I, I felt fine. I felt OK. But the minute that they – again, this could be psychological, I don’t know - the minute they got me into the ward, the blood pressure really did start shooting up, and I noticed the difference. But they told me things like you get black spots in front of your eyes, and I had had that, but not taken any notice of it. Blinding flashes and really severe headaches, but I just thought it was all part of it. I mean, I’m very good at, if I know that I’ve got something or there’s a chance that I’ve got something, I will go out, all out and read, read up about it. And although I’d heard of pre-eclampsia I’d never, never thought that it would happen.

Sarah describes her feelings when she realised her baby would be born at 7 months (33 weeks).

Sarah describes her feelings when she realised her baby would be born at 7 months (33 weeks).

View topic summary
HIDE TEXT
PRINT TRANSCRIPT
He was born prematurely, at 33 weeks because I had pre-eclampsia, so he was born by emergency caesarean.

And I remember at the time, because I was so sick and - I mean, when he was inside me I can honestly say that at some point I hated him. I felt, “My God, I just can’t stand being pregnant. I hate this. I just want him out. I don’t want him in there anymore.” And then when they told me that I had the pre-eclampsia and they were going to have to perform an emergency caesarean, I think the motherly instinct kicked in immediately, and I was, I was thinking, “My God, it’s too early. He can’t come out, he won’t survive.” And as soon as he was born, I mean, everybody was very concerned that I would reject him, but I mean, I didn’t. The minute I saw - I couldn’t, I didn’t see him straight away because they had to take him away, and take him down to the SCBU (Special Care Baby Unit) straight away. But it was just, I don’t know. I mean, I’m sure most people would say the same thing. As soon as you see this child - and he was a big boy. I mean, he was five pounds eight ounces at 33 weeks because of my diabetes. But he, you just want this, you just want to protect them and you, you wish that they weren’t going through it.

Sarah’s baby didn’t cry when he was first born and needed to be resuscitated.

Sarah’s baby didn’t cry when he was first born and needed to be resuscitated.

View topic summary
SHOW TEXT VERSION
PRINT TRANSCRIPT
I remember when he was born and I couldn’t hear anything, and they took him away [clears throat] -because I’m, I was, I, you could feel the sensation of them pulling, pulling about my stomach. And after a couple of minutes - and obviously you don’t know what they’re doing down there - but I just remember saying, “I haven’t heard him cry.” And one of them just shouted, “Oh, don’t worry, he’s fine.” But they’d taken him off. He had to be revived. He was very blue.

So he’d already gone at that point?

He, well, he’d gone over to the other side of the room where they revive them, sort of there. And I said to my husband, “Look, just go over and check that he’s OK.” Because even then I couldn’t hear him crying, and it wasn’t, he was doing this like whimpering sound. It wasn’t a proper hearty cry, and it was just awful, it was awful. And then my husband went over, had a look at him, came back and he said, “Look, he’s fine, they’re just sort of getting him ventilated and everything now.” And then they, they brought him over. As they were walking out with him to take him, put him into the incubator, they just walked past me with him. And he looked - I sort of said, “Can I have a quick look?” and they just sort of put him down. I couldn’t hold him or anything, but they just showed me him, his head, and he, it was just this mass of black hair and it was just, it was wonderful. Most amazing thing ever. And then they took him off and. They took a photograph of him and they bring it up to you, because obviously I’d had a caesarean so I couldn’t go straight down.

Sarah’s family had some concerns that she might “reject” her baby because her pregnancy and birth had been difficult.

Sarah’s family had some concerns that she might “reject” her baby because her pregnancy and birth had been difficult.

View topic summary
SHOW TEXT VERSION
PRINT TRANSCRIPT
And I remember my sister-in-law coming up with a bag of clothes, because obviously we weren’t expecting to be there, and she sort of looked in and she said, she says to this day, “I always wondered what I was going to find, with you, when I saw you.” But she said, “The first thing that I” - because everyone was saying, “Oh my God, how’s she going to be? She’s going to reject him and she’s not going to want him. And she’s so, going to be depressed” or whatever. And she said, “I always remember looking into the room and saying, “I’m not staying I’m just dropping off your bag of clothes’” and she said, and I just looked around and said, “He’s just the most beautiful thing” - and she knew.
Previous Page
Next Page