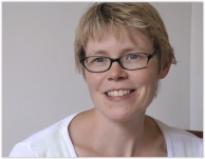 Age at interview: 40
Age at diagnosis: 40
Brief Outline: Ruth took part in the BUMP study during her first pregnancy. She was recruited because of her age.
Background: Ruth works as a Knowledge and Innovation manager. She is married with one child.

Ruth was invited to join the study as this was her first pregnancy and she was an older mother. The monitoring did not reveal any raised blood pressure. Ruth also took part in monitoring for proteinuria, looking for protein in her urine, through a urine test. This did not raise any concerns either. Ruth was induced at 39 weeks and gave birth to a healthy boy.

Ruth Y talked about her motivations for taking part in the BuMP study.

Ruth Y talked about her motivations for taking part in the BuMP study.

View topic summary
SHOW TEXT VERSION
PRINT TRANSCRIPT
Well, I’m a scientist so I understand and believe in the power of research and, you know, am quite willing to, I mean I know it’s difficult to get people to take part in these things because they don’t want to and I feel as if you appreciate that research is important, that I was willing to put a bit of time into to, you know, to be a guinea pig I guess.

Be a guinea pig, yeah, great.

And, you know, you’re benefiting other people aren’t you and, it’s very, unless you actually study these things, things are not going to get better for anybody. They’re not going to get better at diagnosing or understanding the condition, so that was it and a general, on a personal level, you know, nosiness. You know, I wanted to find out a bit more about these conditions because I realised it was, I was a higher risk of developing it myself.

So, from my own sort of personal interest and also concern about myself because I realised I was going to be in a privileged position I think if I was in a situation that I could monitor myself then, you know, as a way of being able to reassure myself as well and I felt that was actually really, really valuable during the study.

Taking part in the BuMP study made Ruth Y more aware about her health in pregnancy, which she saw as a good thing.

Taking part in the BuMP study made Ruth Y more aware about her health in pregnancy, which she saw as a good thing.

View topic summary
SHOW TEXT VERSION
PRINT TRANSCRIPT
It was very straightforward to do, you know, mechanistically, sticking your arm in a tube and pushing a button, you know, is absolutely no problem at all. If anybody was worried about oh, I don’t think I could do it by myself, then, you know, it’s not it’s not a not a difficult thing to do. And I think for me, it increased my awareness of, the potential conditions I could suffer from and I thought that was a very positive thing, so it did make me go away and sort of read a bit more about what it was.

What preeclampsia was and how it would manifest itself and what it would result it.
Previous Page
Next Page