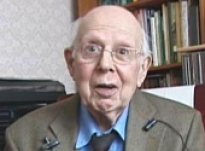 Age at interview: 83
Age at diagnosis: 80
Brief Outline: Eddie was diagnosed with Parkinson's about 3 years ago. He was put on Sinemet but began to experience breathing difficulties at night. Although his consultant encouraged him to continue on the medication he decided not to.
Background: Allotments Officer, single.

Eddie has suffered from narcolepsy since he was a child and has been on a succession of amphetamine related drugs for this and more recently on Ritalin. As a young man he worked in industry but lost several jobs due to his trades union activities. His last job was working as a gardener and then as an allotment officer for the council. When he was retired at 65 he found work privately as a gardener. Now at 83, and in spite of having been diagnosed with Parkinson’s disease 3 years ago, he is still working.

The thing he noticed first was a persistent tremor in his R hand. After he was diagnosed he was put on Sinemet. When at his next appointment it was noticed that his walking  had begun to be affected he was put on a stronger dose. After this he began to experience difficulty breathing at night. His nose seemed to become blocked especially if he sneezed. When he told the consultant about this he was encouraged to continue with the medication. But when the breathing problem did not get better he decided to stop the Sinemet altogether. Although this meant that the tremor and walking difficulty returned, he no longer had trouble with his breathing and for the moment he is happy to leave things as they are.

Since he developed Parkinson’s disease Eddie has had some distressing dreams in which he loses all control of his limbs and falls into the furniture. However in his waking life he has managed to remain independent, living on his own, though close to his younger brother.

Eddie developed breathing problems and was sure they were caused by the Sinemet he was taking, so...

Eddie developed breathing problems and was sure they were caused by the Sinemet he was taking, so...

View topic summary
SHOW TEXT VERSION
EMBED CODE
PRINT TRANSCRIPT
I can’t remember exactly when the walking became affected. The doctor at the hospital was conscious of the fact that my walking wasn’t as good as it should be and he noticed it more than I did to start with. And the effect of the Sinemet plus, I think it was, the effect of that was it improved my walking and also my hand wasn’t shaking so much, so it was being effective. So in the first time it didn’t consciously affect my breathing but he wanted he wanted to increase the dosage because he didn’t think the dosage was strong enough to do the job properly so I had to take an extra tablet, sixty two point five. And when I started taking that that’s when I started suffering from the breathing problem.
Can you describe the breathing problem?
Yes, I would wake up in the night and you breathe through your nose normally and I reached the situation where breathing through my nose was very difficult and the worst thing I could do was sneeze because it increases the blood pressure and so I got the feeling with my nose being blocked up and the effect the effect was very unpleasant.
And so what was the next thing you do you did? You told I think you told me you went back to the doctor.
I stopped taking the Sinemet and.
Had the doctor told you that it was definitely caused by the Sinemet?
I had a after I went back to the hospital, the second appointment, but he didn’t seem too concerned about the breathing effect he was more concerned about the effect by not taking the Sinemet and doing harm to myself and so he suggested I should go back and have a second try. So I thought, “Well, with respect to the medical profession the doctor I’m prepared to do that.” So I went back and I had and I had a second go but the effect was worse than the first time so I wrote a letter to the local doctor saying that I was I wasn’t prepared to to put up with horrific breathing problems. I would rather put up with the problem with my hand shaking than the breathing so he wrote me a letter back saying that he respected my viewpoint which I which I had a right to choose for myself.

Eddie says the message he sends to his leg seems to be delayed.

Eddie says the message he sends to his leg seems to be delayed.

View topic summary
SHOW TEXT VERSION
EMBED CODE
PRINT TRANSCRIPT
Walking. Well, that that’s got worse. I used to be one for striding when I went anywhere I used to stride out. I didn’t I didn’t hang about. I wasn’t one for dawdling but now it’s a question of shuffling tends to. The right leg in particular sometimes when the when natural signal in the brains says, ‘You should you should move your leg now to walk.” The response of the leg sometimes is a second or a couple of seconds late so so I have to wait for it to work.
Well I, it’s a question of it’s a mental question to a degree. The the thing is walking is an automatic movement and you don’t normally think about it. But the point is that when you’ve got a problem you stop and think about it so I think I’m getting a bit lazy with shuffling a bit than I was so I try to stride out a bit more. So I try and counter it but does doesn’t always work but I mean I can walk from here to my flat quite comfortably but it takes me a lot longer than it used to because of my steps are shorter.

Eddie had driven for many years in spite of suffering from narcolepsy, but now the Parkinsons...

Eddie had driven for many years in spite of suffering from narcolepsy, but now the Parkinsons...

View topic summary
SHOW TEXT VERSION
EMBED CODE
PRINT TRANSCRIPT
With the narcolepsy. I raised the issue with the hospital. The question is what about the question of driving when you suffer from narcolepsy? And the advice of the medical profession is that you’re the best judge. We don’t presume to be the judge in the in the matter. The individual is the best person to judge and I started out on the road in 1949 on a motorcycle and ended up with a three wheel and I had a van. I’ve been driving all the years and I’ve never had never had an accident, got a completely clean record. But well, my brother raised the issue with me one day when he and he said, “Eddie, your driving is deteriorating.” He said and he was quite right. And it was when it was when my right leg was beginning to get affected and so that was it, finished. All done.
Previous Page
Next Page