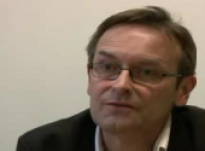 Age at interview: 52
Brief Outline: In 2008, Chris had a kidney transplant, aged 49. Complications meant that this kidney had to be removed. In 2009, he had a second transplant, with a kidney donated by his brother. Both of them recovered well.
Background: Chris is a married picture framer and driving instructor. He has two adult children. Ethnic background / nationality' White British.

Around 1986, Chris went to see his GP after he found blood in his urine. He was referred to a specialist and diagnosed with IgA Nephropathy. This is a kidney disorder that occurs when IgA – a protein that helps the body fight infections – settles in the kidneys. About 25% of adults with IgA nephropathy develop total kidney failure and need dialysis or a kidney transplant.

Chris immediately went onto medication and was told that his kidney could deteriorate at any rate, but the doctors could not predict how quickly or slowly this would be. Around 2003, Chris’s kidney was at 20% of its effectiveness. He was aware that, in a year or two, he would need dialysis. He had regular check-ups, including blood tests. One of these tests, around 2005, showed that he had leukaemia. Chris spent five months in hospital, where he was given chemotherapy. Doctors told him that the chemotherapy would affect his kidneys.

Six months after treatment, Chris’ kidneys failed and he opted to have peritoneal dialysis so he could continue working during the day. Peritoneal dialysis involves using the patient’s peritoneum in the stomach as a membrane across which fluids and dissolved substances are exchanged from the blood. Fluid is introduced through a permanent tube in the stomach and flushed out either every night while the patient sleeps or via regular exchanges throughout the day. Its main advantage is that the patient can have treatment without visiting the hospital.  Chris had peritoneal dialysis for about two or three years, up until his first transplant.

In 2008, when Chris was 49, a kidney became available from an deceased (cadaveric) donor. The surgery went well but, ten days later, Chris had a huge pain in his hip and fell. He said, ‘I was taken down to the operating theatre, put under anaesthetic, and then woke up four or five hours later to find that they’d removed the kidney.  Because I’d had an aneurysm, there was an infection which had put a hole in one of the main arteries in my hip….That was repaired but they couldn’t risk the kidney because the infection had obviously come from the kidney, they couldn’t risk it happening again.’

Chris then had to have haemodialysis three times a week in hospital for a few months, after which he went onto peritoneal dialysis. Throughout this time, his brother – who was living in Australia – was being tested to see if he would be a suitable donor. Chris had hoped that his brother would not need to donate but, because of the complications, this became a realistic possibility. About a year later, in September 2009, his brother came to the UK and Chris had his second kidney transplant.

Both Chris and his brother recovered well and are back at work. Chris now attends regular follow-up appointments and works full-time during the day. In the evenings, he works as a driving instructor. He has raised money for research into leukaemia and is keen to raise awareness of organ donation.

About ten days after surgery, Chris had a terrible pain in his hip. He was taken into theatre...

About ten days after surgery, Chris had a terrible pain in his hip. He was taken into theatre...

The operation went well, and I was recovering and I was about to be released home. I was sitting in my room, I think it was 10 days after the operation, when I felt a horrendous pain in my hip. I can’t remember whether it was left or right now, and I’ve never felt anything like it. It struck me down basically. I managed to crawl onto the bed and press the buzzer and people came in. And gradually the severity of it dawned on the nursing staff and doctors.

The pain was brought under control, you know I was given painkillers. And then that was the final assessment after a couple of hours was made, and it was decided that I needed to be seen. So I was taken down to the operating theatre and put under anaesthetic. And then woke up four or five hours later to find that they’d removed the kidney.  Because I’d had an aneurysm, there was an infection which had put a hole in one of the main arteries in my hip. And they reckoned that if that was repaired, but they couldn’t risk the kidney because the infection had obviously come from the kidney, they couldn’t risk it happening again.

Although the kidney rejected, Chris and his family were still given a gift and an opportunity. He...

Although the kidney rejected, Chris and his family were still given a gift and an opportunity. He...

I would like to say that my life has been saved in a way. And it’s difficult because I wouldn’t know how that would be received. And I would hope it would be received gratefully and that, you know, that I’d just like them to know that there’s a wife and two kids and me, a brother, and everything that has carried on through the tragedy that has happened to somebody else. And that hopefully I would like to think that some of the edges had been taken off that tragedy, that it wasn’t an end, that you know I carry on.

I think it’s irrelevant that it failed for me. I would always be grateful that I had that opportunity. And that, in a sense, it hasn’t failed, that to donate is the main thing and whether it failed or not is irrelevant.

Families should discuss their views on organ donation. Chris feels that donor cards could have...

Families should discuss their views on organ donation. Chris feels that donor cards could have...

I think donation should be a family thing, and it is. So the card should probably carry the signatures of the donor and immediate family. And it’s a process that, and I know that sometimes donors are, they do it independently. And they say, “Oh well that’s what I’m going to do.” And maybe family offer opposition but I’m guessing, in most cases, that it’s a joint decision.

The problem is that, when faced with releasing the organs, it’s an extremely difficult period you know, time. It’s within hours the question is asked, and it’s the wrong time to ask. And a lot refuse, completely understandably so.

Yes. So you think when people register they,

And you feel that there should perhaps be forms that are signed by the person who wants to donate as well as their family, in case they’re not aware of their wishes, or,

Yes. I believe there may be some sort of, yes, that’s the decision, is a joint decision. It’s not down to the individual, the actual donor. Those involved and once the donor becomes a donor they’re not here anymore and everything is put onto the shoulders of parents, sisters, brothers, uncles whatever. So, in a way, those around the donor have a bigger say and that starts when the decision is made to become a donor.