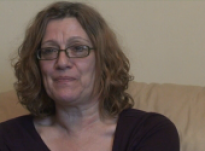 Age at interview: 56
Brief Outline: Despite hot flushes, night sweats, poor memory and mood swings, Sallie did not let the menopause bother her. She believes there is too much doom and gloom associated with the menopause and welcomes the change as a time of greater independence and freedom.
Background: Sallie is a support worker. She is divorced with six adult children. She started the menopause at age 48 and had her last period at 51. Ethnic background/nationality' White British.

Sallie’s menopause story began with irregularity of periods; close together and longer and heavier at first, then gradually becoming shorter and lighter and further and further apart. This continued for around three years until her periods finally stopped.

She also experienced mood swings, sometimes feeling low and other times very happy. While her family understood her moods, in her job she had to try hard and use more control, although as she says ‘I’d just be mentally ripping their head off’. Sallie also found that she was forgetting things, including notes that she’d made to help her remember.

Hot flushes and night sweats began a year or so after her periods became irregular. Sallie was relieved to find that despite feeling like she was on fire, she did not ‘actually go bright red’. Night sweats bothered her partner more than her, with a tug of war over the duvet as she tried to get cool. As a result her sleep was quite restless and she felt tired during the day. However, Sallie describes her symptoms as ‘minor irritations’ and felt she could cope without the need for HRT or herbal remedies. In her case, the ‘horror stories’ she had heard about the menopause did not materialize.

For Sallie, the time around the menopause has been associated with considerable change in her life; with children growing up and leaving home, the birth of grandchildren, the breakdown of two relationships, moving home, and more recently, cancer. Like the teenage transition to adulthood, Sallie believes the menopause marks a preparation for old age, offering women a chance for freedom to do things they never had a chance to do when younger. Rather than a time of doom and gloom, Sallie has welcomed this new chapter of her life as a time of liberation from the constraints of motherhood and periods. She has many plans for the future, including realizing a long-held ambition of setting up a catering business with her son, and possibly starting a new relationship.

Sallie was interviewed for Healthtalkonline in February 2009.

Sallie describes how she coped with hot flushes and how she changed her diet.

Sallie describes how she coped with hot flushes and how she changed her diet.

What did I do about them? Well, just tried to cool down by removing clothing, not too much. Taking a cardigan off or rolling sleeves up, opening windows if I was indoors. And going and standing outside sometimes just to cool down.

I can’t remember when it started but I think the first thing I noticed was irregularity with periods. They seemed to come whenever they wanted to basically. Sometimes two close together and then gradually they were getting further and further apart.

I think that at first they were longer and heavier and then shorter and lighter as I went through it. With longer periods in between, longer gaps in between.

And have you stopped having them now?

How long ago was that?

So how long were they irregular for?

I think two or three. I think I started round about when I was 47. I think that’s when it started and it was probably like three years between then and 50 that it took me to realise that I was going through the menopause. And so there was more irregularity then but then the gaps got longer but it was regular, probably be like every six weeks as opposed to four weeks and then just now and again after that.

Sallie is starting up a new business with her son but looks forward to retiring one day and ...

Sallie is starting up a new business with her son but looks forward to retiring one day and ...

And here I am now and I sort of decided to give up my regular job and do something that I really wanted to do which is catering on a self-employed basis.

Oh, and have you been doing that?

I’m working with my son and we’re going to start a business up. We’re going to specialise in vegan and vegetarian food. Not that I am vegan or vegetarian. But I can cook it.

That’s great so that’s an interesting thing to happen to change your direction.

Well, yeah I’ve changed my, I’ve thought, do something that I really want to do. I’ve thought about it for a long long time and so I’ve actually given up my job and I’m going to go for it.

I’m the sort of person, I just take things as they come. It’s just another stage of life. I suppose it’s a transition towards it. You can look at it like that I guess. No, I’m not bothered by old age. I hope that I’ve got these plans that I want to do this, this and that. I hope I get to do it, probably won’t, but I have this image of me sitting painting in a beautiful garden or something like that, growing herbs and it’s probably not going to happen at all. But I hope that I keep my health and my sanity to enable me to enjoy my old age.