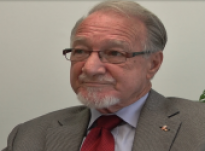 Age at interview: 69
Brief Outline: DJ and his wife Amy were involved in a car crash in 2003. He had some physical injuries, which he suspects lead to further developing the arthritis in his hips. His wife Amy sustained a brain injury and broke numerous bones in her body, including her neck. Subsequently he looked after her.
Background: DJ is married to Amy (Interview 41). They have two grown up children, aged 35 and 40. He is a Christian overseas missionary and a motivational speaker. Ethnic background' White American.

DJ and his wife Amy (Interview 41) were both injured in a car crash, but Amy’s injuries were more serious than his. Her spine, neck and sternum were broken. She had surgery to fix her spine, but her broken neck was not noticed by hospital staff and it “healed crooked”. She also sustained a traumatic brain injury, which lead to her becoming forgetful, and made her a little less inhibited and more likely to say what she was thinking without considering the consequences.
DJ has also had back surgery and needs an operation on his spine, in his neck, but has decided not to have it after seeing the problems Amy had with hers. He has also had both hips replaced because of arthritis, which he believed was exacerbated by the accident. He now is in constant pain and takes tramadol and OxyContin (oxycodone) for it. An effect of the medication was that he “couldn’t visualise how to do something new”, which was a skill he always had.
In spite of his injuries, DJ thought it was much more difficult for his wife. He said her brain injury was “the most devastating” of her injuries. She would “go into the kitchen to get coffee and wouldn’t even know what she went into the kitchen for”. They had to “figure out how she’d get her brain back”. Initially she was not diagnosed as having a brain injury because it took six months before its full impact was evident.
Amy then started rehabilitation with a psychiatrist using a computerised brain training programme. However, after four or five sessions, DJ discouraged her from attending as he did not feel they were treating her appropriately. He said to Amy, “This woman is trying to make you like her and you’re not like her”. It was as if they were trying to re-programme his wife and “inputting their feeling into how she should do things”.
DJ and Amy’s children were “very supportive”. Their son and his family moved in to look after them following the accident. Although DJ said he and Amy are extremely independent people, their children were always there to help. As a message to others, DJ thought it was important for spouses to accept they “don’t have the same person” they had before brain injury. They should think about how to make their relationship work and be forgiving of their partner’s mistakes.

DJ said he and his wife, Amy, married for life. They have conversations about and work on their...

DJ said he and his wife, Amy, married for life. They have conversations about and work on their...

Because to us when we got married we were married for life and that’s all there is to it. And so now it’s a matter of figuring out how to make it work and not every marriage has that. You know, they, they seem to think that there’s an escape clause somewhere, but we’ve never had that and, you know, we set down certain rules within the scope of our marriage to make sure that it never happens.

So when the brain injury comes, you know, to us it’s not any different than one of us being sick and the other one filling in for what they have to do until that time lapses. Because as I say, most people, number one, they can’t stand the change in the person, because there’s a very definite change, especially in any kind of brain injury, people have been operated on, or have suddenly developed a tumour or that type of thing. There’s an absolute change in the personality of the person. And so the person you married is not the person you have. And because you’re not, there’s an attitude of well I can get out of this, or you get so exasperated that you need to get out of this or you think you need to get out of it, because you can’t handle it. It destroys marriages. We just didn’t have that, you know, so we just, we had to learn how to get over the obstacles. I would have to think this bothers her. She can’t do that, she used to do it, she can’t do it now, what she’s doing is not, is not appropriate, like one time when her behaviour has not been well, so we have needed to discuss that, and you know, how do I discuss it? You know, in a manner that, that doesn’t disturb our relationship, knowing that that she’s, you know, and she’s no different to most of us. I mean most of us, somebody tells us there’s something wrong with us, our first thing is no it’s not I’m perfect, you know. So you have to learn how to do that, or learn how to come back to the situation sometimes two or three times until you get to this point where it’s recognisable and then we can do something about it. So that, you know, we survived because we had no choice but to survive and as I said I think a lot of people just have this feeling that they can do whatever they have to do if they can’t survive in the situation they are in. But we all survive situations. No matter how bad things are, unless you’re dead, its survivable, and the only people that don’t, the only people that don’t survive, or when other people don’t get up and drag in, that’s very simple.

DJ says after brain injury your spouse will not be the same. You need to be sensitive and think...

DJ says after brain injury your spouse will not be the same. You need to be sensitive and think...

No I think the biggest thing is to realise that you don’t have the same person that you had. You don’t even have, I know you shouldn’t have to say that, because you’ll know that, you can tell by the way things are working in the house, but from there then you have to say, all right. How am I going to make this marriage continue? What do I have to do without compromising what I know is right and what my spouse knew was right before? How do I make sure we don’t compromise that? But how do I talk to them so that we can work through this? And the thing is that with anybody, but especially a person with a brain injury, once you realise you’re wrong, whether you admit it or not, once you can realise you’re wrong, then you can start to make adjustments. And I think probably the biggest thing with a spouse is that, this is where we have to be extremely careful, is that for instance if I was a spouse and I knew I wasn’t speaking right, and I’d made a decision not to speak wrong again, that doesn’t mean I’m not going to speak wrong. But if I told you that I’m not going to speak wrong, and now I’ve spoke wrong, your immediate reaction is, or the spouse’s immediate reaction is, “Why’d you do that? You said you weren’t going to.” So we have to be careful because they can’t always do what they know they should do. And they may have even made a decision to do it and not told you. But then if you criticise them, in a harsh way, their immediate reaction is don’t tell me what to do. So you, you, you have to learn the balance of trying to, don’t compromise what you know is right but how do we talk to the person, and you can have some serious fights, and we did. But I believe because we made it a conscious decision when we first got married we would never be separated.