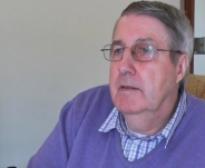 Age at interview: 66
Brief Outline: Peter was diagnosed with multiple sclerosis in 1993. From about 2003 he had a problem of incontinence so started intermittent self-catheterisation, which he found much better than an indwelling catheter. He uses a Conveen during some of the day.
Background: Peter was a specialist fire safety advisor for the NHS before he retired. He is married and has two adult children. Nationality/ethnic background: White British.

Peter was diagnosed with multiple sclerosis (MS) in 1993. In about 2003 he started to have a problem with incontinence. He asked a health professional who ran the local continence service for advice, and she suggested intermittent self-catheterisation.

Peter found self-catheterisation strange at first but soon got used to it. This procedure allows his bladder to drain fully, so prevents incontinence. He uses a catheter called a SpeediCath®, which is self-lubricating.  It comes in a sterile pack and is easy to use.  He uses a new catheter every time he wants to empty his bladder.

Peter also uses a Conveen® during part of the day. This is a sheath which fits over the penis and which connects to a tube which allows urine to drain into a leg bag. Peter uses a wheel chair, so finds it convenient to use a Conveen® for part of the day.  Having a wheel chair sometimes makes it difficult to get to the toilet in a hurry. He passes a catheter when he gets up in the morning, then uses a Conveen® until about 6.00pm.  He passes a catheter again before he goes to sleep and once during the night.

Peter used to get repeated urine infections, so now he takes a low dose of nitrofurantoin every day.  Over the last three years he has had very few infections.  He also takes tolterodine, to prevent urinary frequency, the need to pass urine more frequently than normal.

Once, when Peter was travelling to America he used an indwelling urinary catheter, but after a week he decided that he preferred intermittent self-catheterisation. He found the indwelling catheter very uncomfortable. It made his foreskin red and sore.

Intermittent self-catheterisation has made a great difference to Peter’s quality of life.  It has given him the freedom to go out without the embarrassment of incontinence.

Peter removes an intermittent catheter from a sterile packet and holds it up for people to see.

Peter removes an intermittent catheter from a sterile packet and holds it up for people to see.

Can you hold it up? [He holds up the catheter and takes it out of its holder]

Yes, you can get different varieties, different sizes and mine is size 12 and that’s how you peel and separate the top before removing the catheter, that’s the catheter edge, and you can see the lubrication there. And the lubrication is easy, you don’t have to worry about lubricating and it’s clean, it’s sterile.

Do you still have to use any gel or not?

The nurse showed Peter all the products that were available for ISC. She talked about hygiene and explained the process with the help of a leaflet.

The nurse showed Peter all the products that were available for ISC. She talked about hygiene and explained the process with the help of a leaflet.

View topic summary
SHOW TEXT VERSION
EMBED CODE
PRINT TRANSCRIPT
What about searching for information? Did you always have plenty of information about catheters from the beginning? Or would you have liked more?

No, no, no. I did [have information] from the beginning because I’d gone to the head of the continence service for the health authority that I was in, she was able to a) show me b) to show me the products that were available, to demonstrate how to use them; to talk about hygiene; to see how hygiene fitted in before and after and how you would dispose of the product etcetera. So she’d taken me through the whole process and also she’d explained to me with a leaflet as well, showing me the penis, okay, and showing me a catheter and where it goes and how it goes through the urethra and into the bladder. And she told me about that yes occasionally you could get spasm where the bladder won’t open to allow the catheter through but you know it will eventually relax and you’ll be able to pass it in.

So all that information was really helpful?

Yes very much so yeah.

Peter recalls the first time he was shown how to do ISC. He found ISC very helpful because it allowed him to fully drain his bladder.

Peter recalls the first time he was shown how to do ISC. He found ISC very helpful because it allowed him to fully drain his bladder.

View topic summary
SHOW TEXT VERSION
EMBED CODE
PRINT TRANSCRIPT
I said yes, ‘cos I was willing to give anything a try so she [the nurse] said, “Well can you come and see me in a days’ time?” So I turned up to see her and she said she was going to, she showed me the catheter. It wasn’t one that was self-lubricated. You had to put it into the sink, so we went through the process of cleaning of hands, the process etcetera, so we were keeping infection, as much infection out as possible.

By putting it in the sink you mean lubricate it with water?

Yes with water, I mean to fill the whole container with water from a tap, that’s right. And then we got to sort of hold that up so that it was in the container for about ten or twenty seconds so it became lubricated before insertion. But as I’d not had it before, not tried it before and it was not a self-lubricating one, she said I’d got some numbing gel that I’m able to sort of insert into your penis beforehand. So yes this is a little bit messy but then I found that you could have that numbing gel first, and then insert the catheter and it’s surprisingly, the length of the catheter, most of the length, 90% of the length goes through your urethra, is that the right term? And of course it’s not until you get to the last 5, 10% that it enters your bladder and will start to drain. Then of course I was finding that, well that helped tremendously because I was able to fully drain my bladder whereas before I’d go to the toilet, and then think that I’d finished and when I got back out of the toilet, walking back I’d find that I wanted to go again.

Peter explains how the nurse put him at his ease when she taught him how to self catheterise.

Peter explains how the nurse put him at his ease when she taught him how to self catheterise.

View topic summary
SHOW TEXT VERSION
EMBED CODE
PRINT TRANSCRIPT
Firstly the lady who was in charge of the continence clinic at one of the hospitals that I looked after, with fire training, she was very, very good. She started me on the road of catheterisation. She started me on saying “Look this is what I’d do for my job so,” she says, “Don’t feel embarrassed,” she says, “You’re no different to anybody else.” And she says, “Just accept it for what it is.” And she says, “Once you’ve accepted it in your mind then I think that’s the way to move on.” You know you accept it for what it does for you, for how it improves your life, okay and it does improve your life.

When Peter became incontinent he went to see the person who ran the local continence service. She advised him to try ISC.

When Peter became incontinent he went to see the person who ran the local continence service. She advised him to try ISC.

View topic summary
SHOW TEXT VERSION
EMBED CODE
PRINT TRANSCRIPT
So eventually after a series of tests I was diagnosed with MS. And of course I was confused about that, because there weren’t any publications at that time. I was able to continue working, managed to carry on working for the next ten years, but I had to finish [work] because I couldn’t stand for long periods of time. And towards the time when I had to finish work I started to need to go the toilet more frequently and especially as I was driving around the county; I’d have to think, “Well where is a toilet?” And “how am I going to get there?” And “can I get access to it?” So yes, that worked okay, but also when I’d been to the toilet and got back out to the car I felt I wanted to go to the toilet again. And I’d go back in and I’d either not want to pass water at all, or end up having leakage before I got back to the toilet itself. So that was very embarrassing because I couldn’t really continue my job if I was going out to lecture people on fire safety, I couldn’t really stand out in front of them with my trousers with a wet patch round, and difficult to explain it to somebody so it was very frustrating at that time. So as I worked in the hospital situation I knew the lady who ran the continence service and I asked her if she’d find time to see me so yes she did. And we had a talk through all of my symptoms and she said, “Have you tried intermittent catheterisation?”

It is usually easy for Peter to insert the catheter. Occasionally the catheter will not enter his bladder easily because of spasm.

It is usually easy for Peter to insert the catheter. Occasionally the catheter will not enter his bladder easily because of spasm.

Is it quite easy to tell when you’re in the right place?

There are occasions, I think its called spasm, when you start to insert the catheter and then when it gets to the opening of the bladder it will not penetrate. That can get very frustrating. I’ve had some episodes, but they’re probably the minority, where you end up pushing and pushing and trying and trying, and it seems the more you try, the more you push and I think I got up to about seventy was the amount of times I’d tried to insert it.

Seventy yes, yeah, yeah. Eventually it just sort of released and I was able to insert it and drain my bladder. But they are the exceptions to the rule, 95% of the time or 99% of the time the insertion is quite straightforward and you’re able to drain your bladder fully.
Previous Page
Next Page