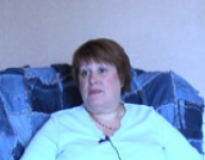 Age at interview: 51
Age at diagnosis: 49
Brief Outline: Diagnosed with breast cancer in 2001, with secondary tumours in the brain, liver and hip. Treated with steroids, radiotherapy and tamoxifen.
Background: Pharmacist (retired), married, 3 children

The diagnosis of breast cancer was a big shock.

The diagnosis of breast cancer was a big shock.

Well, within the space of six weeks, yeah. From being healthy and being at work and healthy except for the headaches, which I'd decided that I was approaching fifty, I was working, managing my family and doing what a lot of women do and deciding well, a lot of people have headaches.

I'm a pharmacist, I used to meet people coming in, the other side of the counter, coming in, women of my age coming in with headaches, and thinking, "Well I've just got to get on with it you know, this is life". So yeah, big shock and I haven't been back to work. That was the last time I went to work.

John Diamond's book 'Because Cowards get cancer too' helped and inspired her.

John Diamond's book 'Because Cowards get cancer too' helped and inspired her.

View topic summary
SHOW TEXT VERSION
PRINT TRANSCRIPT
What about other information that you think people in your situation will need?

I think finding out a lot about the disease... I did do a lot of reading up about cancer and breast cancer last year. And also one thing I did find very useful was John Diamond's book. I can't think what that was called now but it was excellent because he writes it from personal experience about the shock that we were talking about before and what it's like, having cancer and it spoke a lot to me.

What kind of questions did you have in mind then?

Um, specifically for that book do you mean?

That made you read that.

Well what it was going to be like and I still wonder because I don't know because every case is different and it depends where the cancer ends up growing, how it affects you and you can't tell. But it was an experience that I know sometime I'm going to go through and it was quite, in the early days, sort of the beginning of last year that I read that book that I found it very helpful because he carried on living and writing his column and even though it was to do with the cancer, which... you are very involved with your cancer - it is a major part of your life after all.

She found the staff very supportive and enjoyed the activities but found it hard watching others...

She found the staff very supportive and enjoyed the activities but found it hard watching others...

View topic summary
SHOW TEXT VERSION
PRINT TRANSCRIPT
I started in January last year and it was a bit weird to start with because there's all these sick people there and I think that's part of the process, learning to become an ill person rather than a well person that you've been all these years and you know, you have these images of day centres and everybody is sitting round in chairs but it was great.

Great support and I still go there and you're assigned a nurse and they are so supportive and sympathetic and I've done art therapy and I have acupuncture and they offer other alternative therapies and what I discovered quite early on after the second or third art therapy session, was that I've been in shock and once you've discovered that then you can go on to the next stage and it took me a long time to get over that shock but you are, you're in shock for a long time.

The worst thing about going there is that you do see people pass on and that is hard because again you are faced with the reality of why you are there.

So if you were talking to someone like I said earlier, about what help they should seek it, are you saying that you would recommend it?

The contact with the Macmillan nurse and the hospice?

And the hospice and the other patients as well because they're very supportive. They know what you know. We're all going through the same thing in trying to cope with this disease and you know, as I say, the worst bit is watching people deteriorate. At the moment there is a lady who is great fun and she's not well and you know it makes me quite sad because she's a nice lady and I've known her for a year now and that is hard but it's part of being there unfortunately.

The nurse gave the whole family much needed sympathy and emotional support.

The nurse gave the whole family much needed sympathy and emotional support.

View topic summary
SHOW TEXT VERSION
PRINT TRANSCRIPT
The Macmillan nurses and the hospice nurses; we'll do those first; there were sometimes... it was quite stressful at home and still can be sometimes because my family don't want to think about me dying and sometimes I get depressed about it and they don't like me being depressed and particularly my husband, it will set off a row or words spoken. And I can say things there or to my Macmillan nurse and they understand and I can voice my feelings, and vent my feelings about this and there aren't any recriminations and I've been heard and I've listened too and that's the support you know.

I've found it really, really helpful because the family, the children, I mean the boys are twenty three and twenty one now and my daughter's coming up for fifteen, but they are of ages that they've not got the experience of life and they don't want to think about their mum being ill and my husband's much the same. He doesn't want to think about life without me so... But they can listen to those and they've heard a lot of it from other patients and know that it's... you feel well what they sort of say to you,' What you're saying is normal, and what you're going through".

You said earlier that when you heard the word Macmillan Nurse you thought well that's for people who are at the very end and you implied that you were kind of a bit put off about contacting them?

Yes, well I remember saying to this doctor who suggested it that, "Oh I thought it was just for those people who were you know, on their last few weeks dying", and she said, 'Well I think it's worth a call, you know, they do more than that'. And I've discovered that's true and they're there for the whole family which is... I mean most of the family haven't really used my Macmillan Nurse. She's met everybody. I think my daughter thinks she's another mum-type figure and so do my sons but you know, they know that she's around.

My husband. I don't think he'll really mind me quoting him, and she came and met him and after she had gone he said, 'She kept asking me how I feel'. I said, 'Well yes, that's her job'. But they know she's there which is nice and she doesn't visit me that often now because she's got a big case load and because I'm going to the day centre, I've got support elsewhere.