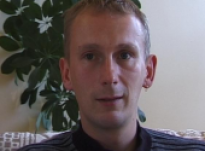 Age at interview: 33
Age at diagnosis: 26
Brief Outline: Testicular cancer (teratoma) diagnosed in 1995, with secondary tumours in abdomen. Orchidectomy followed by four cycles of chemotherapy (each cycle over three weeks with 6 days in hospital).
Background: Quantity surveyor; married, no children.

He found a lump on his left testicle whilst bathing and went to see the emergency doctor the following weekend. She concluded it was just a cyst and nothing to worry about but he sought a second opinion with another doctor. The second doctor informed him that it was definitely not a cyst and scheduled an ultrasound. The thought that it may be cancer was already in his mind and this fear was confirmed by the ultrasound; he had a lump on his left testicle. The man performing the ultrasound was unqualified to make a judgment on what this lump was but told him someone would be in contact. Whilst at work he got a call from the hospital saying they would have a bed ready for him in 2 days, when he asked what for they told him “to have your testicle removed”.
He was very shocked to find out he had cancer; he was only 26 years old and considered himself fit and healthy. All the other men on the ward were in their late 50s/early 60s. Although he saw three doctors before his operation he didn’t feel that he was given enough information, in fact before the operation he was under the impression that the surgeon would remove the lump rather than the whole testicle. It was not until after the operation that he discovered one of his testicles had been removed. He was inconsolable. He was in pain for a few days after the operation, until he left the hospital, and was advised not to drive for two weeks. No prosthesis was offered to him at the time.
He was called back to the hospital two weeks after the operation to see a consultant. The consultant told him that he had a fast spreading form of testicular cancer which is more common in younger men. The consultant also told him that he would need a CT scan to check if the cancer had spread. He appreciated the direct manner in which the consultant told him the diagnosis and the plan of action. The results of the CT scan showed that there was a secondary cancer in his lymph nodes just below his ribs and the consultant informed him that he would need four cycles of chemotherapy to get rid of it.
In preparation for the chemotherapy he visited the sperm bank and shaved his head in case of hair loss. Although he was frightened he was reassured by another patient whose secondary cancer had already disappeared after three days of chemotherapy. He was in a very negative mood to start with until he was lent a book on how to feel positive. After this he was of the view that he may only have a short time left and should therefore make the most of it.
The first lot of chemotherapy was applied intravenously and unfortunately he had always suffered from a fear of needles. To counteract this he was given a relaxant– which had no effect – and eventually was offered a Hickman line (a tube inserted into the superior vena cava so needles are not required). During the second cycle his pubic hair fell out and he started to feel ill despite being given anti sickness medication. He got to know the nurses well and was supported by the other men on the ward and by his family and girlfriend.
He was unable to go back for his third cycle of treatment, at first due to a low white blood cell count and then because someone had taken his bed in the hospital, so his two weeks at home became closer to three. He was angry about this at first but then came to the conclusion that they had probably given his bed to someone more in need than him. By this stage he was constantly sick and had lost a stone and a half because he found it so difficult to eat. By the end of the third cycle all he could stomach was breakfast cereal for every meal.
His break between cycles three and four was extended due to his weak state and again the lack of a bed. Eventually they found a bed for him but it was at a different hospital so he had to do his final cycle with staff and patients he had never met before, making him feel isolated. The treatment did not make him feel so ill this cycle.
The day after the treatment finished he went back to work. He was advised not to go back for a month but he was bored, so the managing director allowed him to work part time. He had to wait four weeks until he could have a CT scan to see if the cancer had gone and throughout that time he was very pessimistic. He was certain that the cancer had not gone and that he would need more treatment. The consultant told him that the CT showed that the cancer was gone.
From then on he had to go back for check-ups every four weeks. For the first two weeks after the check-up he felt positive that he was healthy but the two weeks before each check-up he was convinced the cancer had returned. Gradually he became more positive and the check-ups became less frequent. Since the cancer he has occasionally suffered panic attacks but in general the whole experience left him positive about life.
Since the cancer he has set up a support group for men with testicular cancer as well as working with the local hospital and national support organisations. He feels as fit as he did before the cancer and runs half marathons to raise money for cancer charities.

He suffers from panic attacks that he never had before his testicular cancer.

He suffers from panic attacks that he never had before his testicular cancer.

View topic summary
SHOW TEXT VERSION
EMBED CODE
PRINT TRANSCRIPT
Have you had any other long, have you had any long term side effects?
I occasionally now get panic attacks that I never had before, but only very occasionally, and I'm not, depending on how I feel, a room full of people being noisy will mean I'll have to go and stand outside because I'll just start to panic. And I never had that before, so I can only put that down to the chemotherapy and everything, all the sights and sounds and everything that goes with it. But apart from that I don't think so.

He was offered a prosthetic testicle 6 years after having a cancerous testicle removed. He...

He was offered a prosthetic testicle 6 years after having a cancerous testicle removed. He...

It was never discussed, I was never offered a prosthesis. I've been offered one recently, I recently, in June of this year, had another check-up and I was offered one, 6 years later and I'm not in the least bit interested, not in the least bit. For one, I wouldn't want to go through that operation again, because it's the same operation to put a false testicle in as it was to remove the first one. So you'd be off work for 2 weeks, apart from anything else, and the pain would be just the same and I wouldn't achieve anything from it. If I walk down the street now with the next guy, nobody knows whether I've got one, two or none, so it doesn't make any odds to me. It doesn't stop you sexually, you still produce sperm at that point, so it doesn't make any difference.

He runs a support group and tries to raise awareness of testicular cancer but finds it difficult...

He runs a support group and tries to raise awareness of testicular cancer but finds it difficult...

View topic summary
SHOW TEXT VERSION
EMBED CODE
PRINT TRANSCRIPT
There was one nurse there who has become my adopted ‘mum’, and I still see her today, who would sit by the bed and talk to me. She had two sons of her own, so she was always interested in testicular cancer. And it's down to her and me feeling the way I did that I now run the support group that I run and that I work so hard to make, to raise awareness of testicular cancer, to school children, offices, anybody that wants to listen.
I was at a youth centre this week and you can't force people to come and watch anything. I was asked to go and because it's a youth centre you can't force them to come, and nobody showed a blind bit of interest.
Really.
Nobody showed a blind bit of interest but that's because it's never going to happen to me. And they were 15 and, you know "I'm young fit and healthy". Unfortunately, as the leaflets that I left there say, it can strike at 15, so you're not quite as young, fit and healthy as you think you are, and that's actually one of the, and it's the faster acting cancer that gets you in the younger years. So by the time they've decided, oh we might go and sort something out, it makes the treatment a lot worse and they could perhaps die. And it would be such a waste.
Previous Page
Next Page