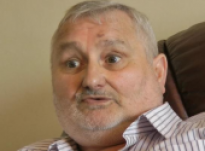 Barry found what turned out to be a malignant lump on the side of his penis. After having the lump removed Barry had a successful course of chemotherapy and radiotherapy. Unfortunately the cancer returned a number of years later, and Barry had to undergo further surgery to remove the affected area.

Barry is a White male and is trained as an approved electrician. He is not currently married.

Barry, who had penile cancer, had a lymph node removed from his groin, and now experiences...

Barry, who had penile cancer, had a lymph node removed from his groin, and now experiences...

Yes, I got a lump in my right groin, and obviously that started off like, well small, and then I can’t remember over a period of time but eventually I had to go in and have this lump removed, it was like on your lymph gland. So I went in and obviously had the operation done and it’s, when they take this gland out it affects the fluid that gland, like affects the fluid in, like, in your legs, and what it’s done with having that lymph gland taken out is, all it’s doing is the fluid’s nowhere to go and it’s building up inside my leg, like, you know what I mean. I’m not in any pain, I’ve never been in any pain but all I do is feel uncomfortable and it’s just something that, like, well obviously won’t go away, it’s going to be, so. But he did tell me that it would only go up to a certain, my leg would only bloat out to a certain degree, but what he means by that is I just don’t know. But, it’s thingy, like, you can see there, look, at the end of the night that is really indented, you know what I mean, and when you put that leg at the side of this one you can see how the fluid’s building up in that leg, but there again it’s going round my body and it’s really, and it is affecting the other leg. But I’m in no pain whatsoever. But it’s just like something else, there was a lump inside my body and it had to come out, so it’s out. I am in a bit of discomfort but at the end of the day I’m still here, so, talking to you, so I’m happy with that.

Well obviously my sex life’s nothing now. I did have – it wasn’t an active sex life after I – sex, after I had the cancer I mean, obviously once I’d had my radiotherapy and everything, I mean I did have a little bit of a sex life, but not much. But, obviously I’ve lost my penis, so I mean it’s just like anything else, I don’t have a sex life as a sex life, if you understand what I mean. I can’t have a sex life, can I, because I haven’t got a penis. Does it still bother me that I can’t have sex? Obviously it does do. I’m a man. It does bother me in a sense but it’s like anything else, I’d sooner not have sex and be alive than have been able to have sex and be dead, if you understand what I mean.

After a recurrence of his penile cancer Barry had the whole of his penis removed. Although he no...

After a recurrence of his penile cancer Barry had the whole of his penis removed. Although he no...

But I’d always had one thought or one hope that to stop the cancer from going inside my body I could’ve, and they cut my penis off, and if cutting my penis off could stop the cancer from going inside my body then well, it’s like there’s no comparison really, is there? If you want to live then you cut it off. And by this time I’d had, like, ten years to come to terms with it. I knew I was going to lose and, like, I was, like, in my sixties so…… but I never ever really sat down and thought, ‘Oh I’m going to lose my penis, what am I going to do?’ It never, I think I thought about that more when I was fifty-one than I did do in my sixties, but I can’t really say to you that I thought, I worked myself up into a state, ‘oh I’m going to lose my penis,’ the only saving grace for me was that I had cancer but it was outside my body. So to stop me having cancer inside my body, if they cut my penis off…….. looking at it like……. if you cut something off that’s not inside your body then it’ll never get inside your body. So, I mean, like, since I’ve lost my penis, I mean, like, about five years has gone down the line, I’m sat here talking to you, I haven’t liked what’s happened to me – nobody likes what happens to you because as a bloke your penis to me, the only reason you’re a man is because you’ve got a penis. So if you haven’t got a penis, in some senses you’re not a man. That’s how I look at it. But I’d plenty of time from me first contracting cancer on my penis to, like, when my, like, ten years had elapsed, so I’d plenty of time when it came back, as it did do, I was glad for them, in a sense, to take it off me because I knew it was going to stop the cancer from, like, getting inside my body. So if you want to live, it goes doesn’t it? I’m not happy about it but I’m still here talking to you now, and I go and see the specialist in June, next month, to see what he’s got to say, but all the signs are that everything’s hunky dunky and rosy, so I, well you can’t say no more about that, I’m alive aren’t I, so that’s it.