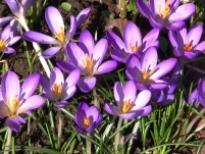 Age at interview: 71
Brief Outline: A few years ago Anne found out she had chronic kidney disease after a routine check for her diabetes. Her kidney function is stable but she would like to know what, if anything, she could do to prevent it worsening. She has a lot of other health problems but feels reasonably well at present.
Background: Anne is widowed with four children. She is a retired administrator. Ethnic background: White British.

A few years ago at a routine check for her diabetes Anne was told out of the blue that she had Chronic Kidney Disease and might need dialysis. She felt shocked as mention of dialysis made it sound like a serious situation and consequently she took in very little of what she was subsequently told by way of explanation. She feels she knows very little about the condition and would like to find out more. She has never been offered any written information about kidney disease and would like to know if there are things she could do to prevent her kidney function from deteriorating further, such as by altering her diet, or whether there are symptoms she should look out for. Recent test results suggest her kidney function is stable; she has not needed dialysis yet and it has not been mentioned since.

Anne has a variety of other health problems. She has type 2 diabetes, which she manages through her diet. She has developed numbness in her feet and legs due to the diabetes and her mobility is limited by arthritis, which is treated by slow release pain relief patches. She has high blood pressure, for which she takes a diuretic and, with her GP’s blessing, varies the dose herself within certain limits depending on what she’s doing.

She has colitis, which limits the amount of fruit and vegetables she can eat. She takes medications for angina, a peptic ulcer, insomnia, and has a vitamin B12 injection every eight weeks for pernicious anaemia. She also developed a rash on her arms and legs with swellings under the skin, which was diagnosed as vasculitis and treated by a course of steroids. She recently had a bout of diarrhoea and vomiting caused by Salmonella infection, and a viral infection of the ear was suspected as the cause of an episode of vertigo.

She takes a lot of different medicines for her various health conditions and also takes multivitamins and minerals. At first she was upset by needing so much medication but nowadays she is used to it and it has become a normal part of her life. She sees a diabetic nurse every six months for a review of her diabetes, and also has tests at other times to monitor her various other conditions, such as liver function tests for the colitis. She phones the surgery a few days after each test for the results and, although she is told her blood sugar levels, no specific results of other tests are offered to her apart from blood pressure, but she would be interested to know the details.

Despite all her health conditions Anne feels reasonably well at the moment. She is grateful for the emotional and practical support she receives from family members.

Anne was encouraged by information from the Kidney Federation and from a TV program thinking that even if she had to have dialysis at some point it would still be possible to lead an active life.

Anne was encouraged by information from the Kidney Federation and from a TV program thinking that even if she had to have dialysis at some point it would still be possible to lead an active life.

View topic summary
SHOW TEXT VERSION
PRINT TRANSCRIPT
To me, the word dialysis meant something, you know, serious, something major was not right and that it would. I pictured somebody taking a long time to do dialysis and restricting anything; salty foods. I don’t know whether it’s still the case now but a long time ago, I read something about a young man who was having dialysis, and that’s when he used to eat things like salted peanuts and crisps. I don’t know whether that’s true but I picture that this is something major. And I was surprised that, when I looked at the magazine that’s produced by the Kidney Federation people, to see that there are holidays in Greece, for example, where people can go on holiday and have their dialysis.

And I thought, ‘oh that sounds more encouraging, you know, people must be able to do normal things alongside dialysis.’ And then there was an incident, something on the television, I forget what it was. And there was a young woman who - ah, that was it. She had a job in the city, in the financial sector, and she had her dialysis at home over night and then during the day, held this high pressured job and led a very normal, and active life.

So I thought, this is good to hear positive things about people who are having dialysis.

After having tests done at her GP surgery Anne waits about a week before phoning up to find out about the results.

After having tests done at her GP surgery Anne waits about a week before phoning up to find out about the results.

View topic summary
SHOW TEXT VERSION
PRINT TRANSCRIPT
So tell me a bit more about getting the results of all your tests? I think, do you have to ring up and get them or do they call you or - what happens?

It’s usual that I phone them. They’re coming through quicker now than they used to. But I, I usually wait about a week and then I phone up. But I know they’re normally available now within about three days and most of the time, I ask the receptionist and she says, “Yes, that’s fine.” Or, as happened last time, when they wanted me to come in and repeat one of the blood tests.

How do you feel about waiting three days?

That’s all right. I’m quite prepared to wait whatever is necessary.

Anne wants to know how to help her kidneys stay well and what kind of ‘danger signs’ she might need to look out for.

Anne wants to know how to help her kidneys stay well and what kind of ‘danger signs’ she might need to look out for.

View topic summary
SHOW TEXT VERSION
PRINT TRANSCRIPT
He showed me the laptop and there were, you know, columns and figures and that. But I’m sorry, I really didn’t take in what these meant and… I think it’s only since then that I’ve tried to find out more. But really, there’s a lot I need to find out more about. I’m pretty much in the dark. I feel that I’m pretty much in the dark.

So your GP hasn’t suggested that there’s anything you should be doing?

So have you been given any kind of information about chronic kidney disease, any written pamphlets or anything?

What sort of things would you like to know?

What is the best way to manage your diet in the way that will benefit your, your kidneys? And are there any, sort of, perhaps, danger signs to watch out for when they might not be working well?

Anne recalls a GP suggesting she should not eat too much fruit and vegetables because of her colitis. She describes her daily diet, which is also limited by diabetes.

Anne recalls a GP suggesting she should not eat too much fruit and vegetables because of her colitis. She describes her daily diet, which is also limited by diabetes.

View topic summary
SHOW TEXT VERSION
PRINT TRANSCRIPT
Tell me about your diet because I imagine it’s a bit restricted; both because of the diabetes and the colitis.

I have Cheerio’s each morning and I think ‘well, they’re probably a good thing, whole wheat cereals and so on’. And I tend not to have much round about lunch time, might have a couple of digestives to keep the carbohydrates going. And I’m fortunate that, although I don’t cook, there’s a family member who will cook most days. So I have things like chicken, rice; I like ham. I tend to not have many vegetables. I understand why five a day is recommended for most people. But I remember the GP a long time ago, saying, “Yes, I realise that a lot of vegetables is not going to be a good thing for somebody with colitis.” So I perhaps have a lot less fruit and vegetables than most people. And supper time, I usually have something like, sort of, cheese and biscuits. And I tend to have quite small quantities and to eat quite slowly because that’s the way I eat anyway.
Previous Page
Next Page