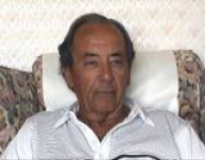 Age at interview: 72
Brief Outline: Was diagnosed with cancer of the oesophagus in 2001. Was admitted to ICU because of organ failure (heart). Was in ICU for almost 4 weeks and general ward for 1 week.
Background: Occupation: retired. Marital status: married. Number of children: 2. Ethnic background: White British.

He got through his illness with the help of family, friends and the power of prayer.

He got through his illness with the help of family, friends and the power of prayer.

View topic summary
SHOW TEXT VERSION
PRINT TRANSCRIPT
And I understand that I knocked on the pearly gates a total of four times but I'm still here. And apart from the care and attention of my wife and my family and prayers from the church and friends in different bowling clubs from as far away as Australia quite frankly, I think that this has helped me get over the trauma of the operation, not that it worried me. I had a problem. The doctors were seeing to it and I just have to go along with it.

Most certainly the power of prayer. I'm not advocating that every patient sort of goes and clings to a church group or something like that but we've always been churchgoers anyway. I've been associated with church choirs ever since I was about fourteen years of age. But I would certainly suggest that family support is a major priority and when I say support I don't mean the financial side or the crying side. It's basically the loving side of the family and here again I don't want anyone to consider that because someone is ill and just come out of hospital that everything has got to be done for them. Give them a, give the patient a chance to do things for himself. But certainly I think we've both found the power of prayer, not only in our own instance but in instances of some of our friends. It's a weird and wonderful thing.