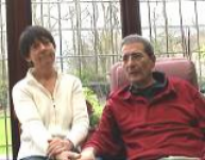 Age at interview: 60
Brief Outline: Was diagnosed with Guillain-Barre Syndrome, a rare disorder of the peripheral nerves, those outside the brain and spinal chord. Was in intensive care for 7 months and on a ward for 1 month. Was preparing to have rehabilitation at time of interview.
Background: Occupation: self-employed, own company. Marital status: married. Number of children: 2. Ethnic background: White British.

He has had to learn to be patient but will be living life as normal once he is better.

He has had to learn to be patient but will be living life as normal once he is better.

View topic summary
SHOW TEXT VERSION
PRINT TRANSCRIPT
Patient' In the end it did change my outlook. I did go, didn't have much choice really but I mean my patience was a lot, lot more. It's still good now at the moment but I don't think I'll stay like it, for a little while. As soon as I can walk about again I think my impatience will come back again 'cause that's what I am naturally. I hope anyway 'cause I wanna get back to as I was.

Patient' I agree, I agree.

Patient' Yeah, no I agree on that, it's not actually anything we've discussed before is it?

Wife' No. But it's only been two weeks and already it's -

Wife' And we just want it back [laughs].

Patient' We just want it again [laughs]. And we had a terrific life but things were gonna change and I was gonna retire at sixty and not do so much work, which is one thing I do enjoy doing but...

Wife' You'll never give up completely.

Patient' Oh I'll never give it up no, but I was gonna retire and do a lot more time off. So we've got that to look forward to, say from this October onwards, and do things. But it hasn't, [sighs] it has changed our life a little, well only from the fact that it's messed up our life really hasn't it? For the week, the year, nigh on the year now so.

Wife' I'm just looking forward to getting our life back and that's...

Patient' Yeah well we'll always look forward, don't look back, look forward and don't worry about what's happened back there, what is coming...

He aimed to breathe without equipment and to move to a general ward by certain dates.

He aimed to breathe without equipment and to move to a general ward by certain dates.

View topic summary
SHOW TEXT VERSION
PRINT TRANSCRIPT
Patient' All the time I was in there really, I had to have aims. I aimed to get off the ventilator by [my wife's] birthday, October the thirty-first, and I did it a couple of days beforehand. I then aimed to be off, have the tracheostomy out by then, end of January, which I did, by a couple of days again. So all the time I was in there I had to have some sort of aim to go for and even when we first went to the B20 Ward where I had the relapse, the doctor had to be convinced that I was ready to go down there to B20 and I put on a good show and he was convinced I was prepared to go, ready to go down there 'cause I wanted to advance. I didn't wanna sit, lay there in bed all day long. But that proved wrong and that moved, it did prove I wasn't ready to go, nowhere near ready to go. That was a real mistake. But all the time I'd set myself goals and, in nearly all of them, I did meet.

So that kept me going as far as eight months. Nine months ago if you'd said me, "You're gonna spend eight months in hospital [participant's name], in the same bed, in the same ward", I would have said, "You know, I don't do that. I don't do sitting around. I'm a busy, busy person." Anybody who knows me knows I don't sit still, I'm always doing something, I'm always on the go, thinking of something do you know?

Patient' Got a garden like this, you know, it don't just, you know we do it ourselves. And work, I'd eased off a little bit with work. I was sort of semi-retired as it were but, anybody will tell you, "No, [participant's name] won't sit still for eight months". But I'm afraid [participant's name] did.

He recalled how nurses joked with him yet were quiet and gentle with people who needed a...

He recalled how nurses joked with him yet were quiet and gentle with people who needed a...

View topic summary
SHOW TEXT VERSION
PRINT TRANSCRIPT
Patient' Oh yeah, wonderful people. Yeah they had, if they'd had a couldn't-care-less attitude, it would have made it very, very hard, very, very hard.

Wife' It's hard being a patient, it's hard to nurse somebody all that time, and it's hard being patient for all that time, and being patient and keeping a sense of humour. And they would, [my husband] liked a lot of chat and interaction, and they realised that. And they would come in and there'd be some banter. And then they'd be at the next bed as quiet and gentle with somebody else because that's what they needed.

Wife' But [my husband] needed a lot of interaction, he needed to be kept going and he got that.

Patient' Oh yeah they used to

Wife' One nurse would threaten to take his tracheostomy

Patient' I was singing, yeah.

Patient' "You wait till I get better, I'm gonna come and get you".

Patient' But no, as [wife's name] just pointed out, they are as attentive as the person needs. And it's, repeating what she just said, they'd leave me one minute and have a laugh and bit of a joke and then go to the next patient, who was seriously ill. In fact I had people say to me, "Cor, you know, you". I might say language, I don't mean bad language but the way he was talking, "Should he be talking to you like that?" I said, "Yeah". I said, "You wait till, you listen to how he talks to that fella next door who's really ill". And it's an entirely different person talking to that person, he's talking to him as he should and he's talking to me as I wanted him to talk to me, as a mate, not as a patient. I never wanted to be a patient, I was a mate you could have a laugh and joke with and take the mickey out of, you know.

He praised all the hospital staff but felt that nurses in ICU could give much more care and...

He praised all the hospital staff but felt that nurses in ICU could give much more care and...

View topic summary
SHOW TEXT VERSION
PRINT TRANSCRIPT
How did you feel about going onto the general ward when you were in Intensive Care for eight months and then moved to the general ward, how did they move you?

Patient' They moved me by, on the bed. It was quite

Patient' Dramatic really, yeah. It's like comparing going from a five star hotel to a bed and breakfast, because that's what you're getting in ICU, you're getting five star attention. And obviously when you get down on the wards, you're been used to one nurse sitting there, especially with my hands and everything. I couldn't talk, doing every command and, "Can I have a cup of tea please?" And, "Could I have a drink please? Could you give me a drink please? Could I have something to eat? Could you turn the paper over for me while I'm reading?" Whatever I, "Could you just put the television on me? Can you change the programme over in the television?" It's just like having a butler, well actually a couple of the men of a night time especially said, "When we look after you [my husband] of a night time, we're not nurses. We're butlers." 'Cause that is what they really were, they was just looking after...

Patient' Fetching and carrying that's what I meant, they were butlers. So going to another ward was different but they, this business I mean like they did tell me, you know, they told me, "[Participants' name], you know, it's gonna to be nothing like here." Most men when they, or ladies, patients when they go down there still most likely, perhaps a little but still, not unconscious but...

Patient'...unwell and not really with it whereas I was perfectly okay. And they said to me, "You're gonna notice the difference." And I said, "Yeah I know I will." But there's no comparison. There again the nurses on both wards I went to were terrific, the standard of nursing is very good but you can't compare it to ICU.

Wife' No, there's one patient-one nurse, and when you go to the ward it's four nurses, six nurses, twenty-four patients. So, you know, you do have to wait longer for things.