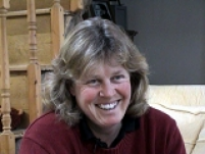 Age at interview: 44
Brief Outline: She cares for her 13-year-old son, who has congenital muscular dystrophy. In 2003 he had a serious chest infection and was admitted to a peadiatric ICU.
Background: Horticulturalist, married with four children. Ethnic background/nationality: White British.

Her 13-year-old son has congenital muscular dystrophy, a genetic disorder that weakens the muscles that help the body move. She is an outdoor person and adjusted her life enormously to care for her son, who needs help with all aspects of movement. He has support from a carer in the mornings and evenings during the week.

In December 2003 he had a serious chest infection and was admitted to a paediatric ICU. While he was there, she and her husband spent every day in the ICU. Their son was taken off the ventilator on several occasions but had to be re-intubated. He also caught MRSA.

During her son's two month stay in hospital, she and her husband moved to the hospital and lived there. She felt that parents know their child best and should be involved in their care, decisions about their care and ask questions if they need more information. Since her son was discharged from hospital he was been weaker and needed more care.

She and her husband support each other when caring for their son feels difficult.

Show in context
SHOW TEXT VERSION
PRINT TRANSCRIPT
It's very, very difficult because I'm quite an independent person. And, you know, when you have a baby you expect to sit there and feed them and you expect to do this, that and the other, and it's kind of human nature.

We do resent it and we do, you know, you have your low moments. And we kind of allow ourselves to have a really good moan and we say, 'It's not bloody fair' and, you know, 'Why us?' And you know, sometimes I'll be a bit down and [my husband] will be fine and he'll sort of say, 'Now, come along' you know. Or he'll let me have a really good grouse and then I'll get over it. Or vice versa. He can be a bit sort of grumpy for a day or something...

She felt her son still needed one to one nursing care because he couldn't move his fingers or...

But it was quite a battle keeping him there, because the nurses could see how much better he'd got. And they kept saying, 'Oh, he doesn't need, you know, he should be on a public ward.' And we fought tooth and nail to keep him in a room. And I kept playing the MRSA thing and I said, 'Well, you don't want to spread it round the hospital, do you? You know, it could spread, it could spread. You know, you never know.' And so they did say that if we went onto a public ward we could, you know, have a room. But he would still have been with a nurse who was looking after probably three or four other children. And he does actually need, you know, 24-hour, not someone sitting beside him, but he needs 24-hour awareness. I mean if he shouted now, I'd be off like a shot. So, you know, he's quite high-maintenance. And people don't actually, you can sort of say, 'Oh, he's very high-maintenance' and they say, 'Oh, yes, of course he is.' But it's not actually until you're with him for a day that you do see, you know, 'Can you move my arm? Can you scratch my nose? Put my arm a little bit higher?' you know, that sort of thing. But it was a very, very, hugely traumatic time.

She and her husband tried to keep everything as normal as possible and celebrated Christmas at...

Show in context
SHOW TEXT VERSION
PRINT TRANSCRIPT
We stayed in [name], which is a, I don't know if many children's hospitals have one, but it's a house that's actually sort of, it's a unit in the grounds of the hospital. And they try and make it as much like a home-from-home. We stayed there. And you're sort of on call.

So we didn't have Christmas, well, we did have Christmas 2003. Because my mother was very sweet and said, she took [my other two children] home, because it was the school holidays. They went back and saw grandpa. And my oldest son came up for Christmas. And we always spend it here, very traditional, you know, sort of turkey and all the trimmings and everything. And she said that she'd do it at her place and then bring them over to visit in the evening. And [my husband] absolutely insisted, no, we were going to have, [our son] was going to make it over from the ward. And my mother was made to bring the turkey over on Christmas Eve. And [my husband] took over the kitchen in the [hospital accommodation] and he did a full-blown, fabulous Christmas dinner. And everybody said, who was sort of staying there, we had a few people join us and things, and the staff all said that it was the first time any family had actually cooked a proper Christmas meal at the [hospital accommodation]. Which, you know, we were determined to keep it as normal as possible for the others.

A carer helps her son during the week and she cares for him the rest of the time, including...

Show in context
SHOW TEXT VERSION
PRINT TRANSCRIPT
It knocked him back enormously. Beforehand he was a lot stronger. He's been a lot weaker since having this, he's been left with, his left lung doesn't work particularly well now. He's on oxygen overnight. Which he never had before. Every night. And he has oxygen during the day. He's certainly got worse. When he first came out of hospital he was very, very weak.

We get, [the carer] comes in school days 7.30 till 8.30 in the morning. Gets him up, gets him dressed. And then she or somebody else will come back at 5 till 7 in the evening. Which, they feed him and bath him and put him into his pyjamas. And one reason we do this is because he's 13 and he still has to wear pads. And so it kind of gives him a bit of privacy. Because being 13, he needs his privacy. And I mean I do change him. I do everything for him. [My husband] doesn't as a matter of principle. You know, I mean if I'm not here, then, and he needs changing, [my husband] will do it. But as a matter of course he doesn't. And that's kind of an unwritten agreement. But he will take forty-five minutes to eat a meal.

She doesn't go to church as often now and believes being a good Christian is more about how you...

Show in context
SHOW TEXT VERSION
PRINT TRANSCRIPT
I suppose actually in a way I've become less religious. I used to go to church a lot. I used to insist that the children went every Sunday from the middle of November right through to Christmas. Otherwise there was no point having Christmas, because it wasn't just all about presents. And we always went sort of during the Easter period.

But I think that, well, I haven't been to church.

I think, I mean our local vicar is sweet. And I was very involved in the church when we were in Wiltshire, when [our son] was originally born. And they were great and very supportive and things, and I was very appreciative. And then we came up here and it was sort of a different sort of area. But then, then [another vicar] came about six years ago I suppose. And she was a brilliant, she was a lovely, sweet girl, who is our local vicar. And I was very much sort of churchy and sort of going and all that sort of thing. And she was sweet when [our son] was in Intensive Care and she came to visit and whatever. But we can't go in the winter now because he gets too cold. And there's only about six people in the congregation anyway, so they don't heat the church. And I sort of have moved away from it really.

That's quite fascinating. Because a lot of people that we've spoken to have said they've gone the other way around. That because of the Intensive Care experience and, you know, the whole illness experience, and even just stopping and having to think, has made them more religious or more spiritual. So you feel you've become less religious or less going to church but would you say your beliefs are still the same?

No, I think my beliefs are less. I believe that if you're a good Christian, I don't believe in'[dog interupts]. What do I believe? I don't like to say I don't believe in God because, just in case. But I don't believe he's a big lovely man with a big grey beard like I used to. I believe there is something there, but I don't quite know what it is. But I think that being a true Christian is far more about doing things for other people and much more how you lead your life than going to church every Sunday. Years ago I did go to church every Sunday in [place name] as I said before. And on Monday morning I was going across the road to post a letter. And this poor lady fell off the pavement, and I rushed to pick her up and sort her out. And three people who'd been sitting in front of me in church the day before ignored her. To me, they are not true Christians.