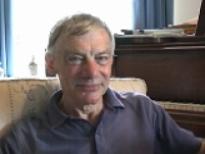 Age at interview: 67
Brief Outline: His wife was admitted to ICU after having complications during emergency surgery. During her time in hospital he had a lot of support from family and his local community.
Background: Retired teacher, married with two adult children. Ethnic background/nationality: White British.

In 2005 his wife had surgery for bowel cancer. Four weeks later she had a lot of pain and had to have emergency surgery. Because of complications she was admitted to ICU, where she stayed for five days. She was then transferred to a general ward for a further nine days.

He visited his wife daily in ICU and then on the ward. When she started improving, he took home-cooked vegetables for her that he had grown in their garden. He felt that he was given all the information he needed while his wife was in ICU but that there was a lack of communication between the ICU and ward staff who didn't know how weak she was physically and what she could do for herself. Things improved when he and his son spoke to a consultant registrar. He also felt concerned when, on several occasions, his wife's medical notes were not available and he had to answer questions about her previous treatment.

He looked after his wife once she was back home and, six weeks after being at home, she had a 30-week course of chemotherapy as an out-patient.  At the time of interview, she was waiting to have further surgery. He felt that he had a lot of support from family and from his local community throughout his wife's illness.

Four weeks after surgery for bowel cancer, his wife had to have emergency surgery and went to ICU...

Four weeks after surgery for bowel cancer, his wife had to have emergency surgery and went to ICU...

It was my wife's second visit to the hospital in about four weeks. She'd had an operation, a colostomy, which was very successful, and came out of hospital after ten days. And then about four weeks later there was a further problem. And we saw the GP, our local GP. And after three days had to call an ambulance. And so it was an emergency situation when my wife went in at 4 o'clock in the morning. And that same night I was called in because she had been rushed down to the theatre for an emergency operation.

I was told at the time that in all probability after that operation she would in fact be going into Intensive Care. And I suppose it was then that I realised the seriousness of the situation.

So if we could just go back to the beginning. Your wife went into hospital very early in the morning, the very first time?

Was she in pain?

Very real pain. Yes. We had to call, we had seen the GP the previous day, who said we must go back the following day. But things deteriorated rapidly after the surgery, our local surgery had closed. And we called the emergency services, the emergency doctor visited here and immediately called the ambulance.

I was invited to go in the ambulance. But I'd rather have had my own car there so I was independent. So I followed on after a few hours, to see her.

So as soon as she got to hospital, was she taken to A & E?

I think it was to the surgical assessment unit. And then onto a general ward. And it was at, I think tests were then carried out during that day.

And in that time, were you waiting in the hospital?

I was, I went into the hospital and had access to my wife during that time. At that point the communication was good.

And you were receiving all the information that they could at that stage give?

Yes, yes. We were both kept in the picture during that first day.

And were you told that your wife would go for an operation, and following that she would go into the Intensive Care Unit?

No, we weren't. I think they did not realise the situation until late on in the day. I stayed with my wife during the day and then came home. And had a phone call at 9 o'clock in the evening saying that she was going down to the theatre. By the time I got there, because it's a three-quarters of an hour journey from here, by the time I got to the hospital she in fact was in theatre.

Because a friend had previously been in ICU after a car accident, he knew what to expect when his...

Because a friend had previously been in ICU after a car accident, he knew what to expect when his...

So your wife went in for the second operation. And after that, that's when she went to the Intensive Care Unit?

Yes. I mean I think the nursing staff and the medical staff were aware that after that second operation, they were aware, because as I arrived at the hospital they said, 'Well, your wife has already gone down to theatre. When she comes out, she will be going to Intensive Care' and explained that to me.

And did they say why she would be going into Intensive Care?

Yes. And did they tell you before you went into Intensive Care what equipment she might be attached to once she was in there?

I don't think I was. I think when I arrived at Intensive Care the nurse then explained in detail. I think probably, you know, forewarned me that my wife would be sort of hooked up to all sorts of equipment. And so this was explained then, but not before I went down.

Yes, yes, I was prepared. We'd had a friend who'd been in a very bad road accident some years ago and so we'd had experience of Intensive Care before. And perhaps if that had not been the case, I think it would have been more alarming. But, yes.

He and his son talked with ICU nurses and decided to let his son's nine-year-old and seven-year...

He and his son talked with ICU nurses and decided to let his son's nine-year-old and seven-year...

Were you allowed to go to the ICU whenever you wanted or were there specific visiting hours?

No, I was immediately assured that 24 hours, I could go just whenever I wanted.

And as you live quite far from the hospital, were you able to go every day and stay there? Or what was your routine over those five days?

Yes, I was able to go in. There was a unit there I could have stayed. I was offered the chance of staying. And as it happened, domestic things here, I wanted to come back and do some things. But there was complete freedom. And the other thing which we were very pleased about, our son came down with his family. I discussed, two of our grandchildren are aged 9 and 7, discussed with the staff in Intensive Care, although my wife was completely incoherent, babbling in sort of pseudo-German, she was in fact a German teacher and, although she obviously had tubes all over her, we discussed whether the grandchildren should come and see her. And they left it entirely to us. We decided that it was the right thing to do and that it, and, you know, the proviso being no more than two people at the bedside at a time. Which we accepted. But we were sure that was the right, in our case, the right decision for the children to see her.

He felt there was a lack of communication between ICU and ward staff but, once the nurses on the...

He felt there was a lack of communication between ICU and ward staff but, once the nurses on the...

Yes. So your wife went onto the general ward. And what were your main thoughts and concerns there?

I think we were concerned, my son as it happened came down at that point, and I think we were both concerned that the difference in support for her from being in Intensive Care and onto a general ward was such that she really felt isolated. In fact I telephoned, I said that she had had a colostomy and we'd got to know the stoma care nurses well, I telephoned one of them and said, 'I'm not really asking you to help in a medical professional capacity but just as a friend.' Which she did, and gave support to my wife.

While she was on the ward?

When she was on the general ward. Things improved rapidly over the next two or three days. I think initially there was this lack of support and of realisation as to how serious her state of health had been in the previous few days.

What were your main concerns there?

I think the lack of, as we saw it at any rate, the lack of communication between the staff in Intensive Care and the staff on the general ward. We had, we did see, my son and I did see the consultant registrar. And I think after that things did improve. And from that point on there was good care on that general ward.

What were the main things that you were concerned about with the nursing care there in the general ward?

We felt that the nursing staff saw my wife as a frail old lady. In fact she's very far from that. Not realising that she was in that state because she had come from Intensive Care, or seeming not to realise that. The fact that she couldn't even hold a cup. She was given a drink but was unable to hold the cup. And that was not appreciated.

He would have liked to be able to contact one specific person on the ward who would be able to...

He would have liked to be able to contact one specific person on the ward who would be able to...

We would have, personally would have found it useful to have had a contact name, a contact person on the general ward. So that when we did have concerns, I think I said, my son and I, we had to almost demand to see the medical staff, the doctors, the consultant registrar. But I think had there been a contact person on the ward, as there was in oncology, as there was with the stoma care nurses. We didn't have that personal contact. I think that would have been a useful thing.

Someone who you could just ask questions to? Or a telephone number if you were at home -

- and you had a question that you could phone?

And someone who would then respond to that, or pass the question on, yes.

Did you ever come across any outreach nurses there on the ward?

So really someone that, when you've got questions, you know who to contact either by telephone or in person because you're there at the hospital?

Yes, yes, yes, that would have been useful.