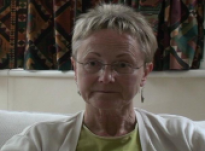 Age at interview: 33
Age at diagnosis: 33
Brief Outline: Olivia and her husband, Walter (Interview 39) had two children conceived with donor sperm in the 1980s. Their children are now in their 20s.
Background: Olivia is manager of an infertility support group, and married to Walter (Interview 39). They have three grown up children. Ethnic background' White British.

Olivia had a son from a previous marriage, but when she and her second husband  (Walter -  Interview 39) started trying for a child, nothing happened. They went for tests and were told that they would need donor sperm to conceive. Olivia and Walter thought it over for almost a year, and were then ready to try for a donor conception. Although sperm donation was offered on the NHS at that time (1980s), there was a long waiting list and so they decided to find a private clinic. Olivia conceived quickly and had a son, and subsequently a daughter. Both she and her husband have been very open about their donor conception, and been involved in setting up a support group for other parents who have started families with donor conception.

Olivia and her husband took over nine months to decide to use donor sperm. They approached this ...

Olivia and her husband took over nine months to decide to use donor sperm. They approached this ...

View topic summary
SHOW TEXT VERSION
PRINT TRANSCRIPT
And I can’t remember if I actually raised it in the café with [husband] at the time. But pretty soon after that, I think I did. I mean it was very clear that the whole thing was too raw to proceed with at that point, for both of us, particularly, he needed time to think about it. To think whether that was something that we wanted to do.
And I suppose we spent the next nine months adjusting in our own ways, and I think in very different ways and I think that’s really an important thing for men and women to know that actually this is often what happens, is that men and women address and handle and manage all the feelings and issues round infertility often in very different ways.
[Husband], is I suppose, like many men, someone who feels things really quite deeply but rarely speaks about his feelings and in many ways doesn’t necessarily have a language for them. Whereas, I’m somebody who wears my emotions very much on the outside and I need to express my feelings and, and talk about them.
So there was a kind of mismatch there. But I don’t remember that being a huge problem for us. I just know that he quietly thought about it all, and I continued to research. And talk to other people. Because I think right from the start for us infertility and the possibility of donor conception was never shameful.
[Husband], gets his sense of who he is, as both a person and a man from other places. I think particularly through his work actually. And he was certainly very clear, that the infertility was just… oh I don’t know, just, you know, just something that had happened to him. It wasn’t his fault. And it certainly didn’t make him feel less of a man in any way.
So it was fine to talk with other people about it, and for me that was certainly a relief to be able to do so. I didn’t in fact tell closest family at that time, just a couple of close friends because we decided this was very… this was personal for us and we didn’t want to be being asked about it all the time, and you know, what we were doing about it.
But we did, once I had found a small private clinic that did donor conception and it’s quite interesting in that I had been somebody who would not have dreamt of going into the realms of private medicine, prior to that time. But the, there was a hospital that did donor conception on the NHS, but they had very long waiting list and I decided that we needed to take some control back here. It felt like control had been taken away from us about having a family. And the way of taking some control back, was by using a private clinic where we could decide when we were ready to have treatment, and they would then have donors available.
So that’s what we did. And in fact, before we’d made the decision to go ahead, we both went to that clinic and we had our photographs taken, which was going to be the way of matching us with a donor.
And we then went away and thought about it a bit longer. In fact, it took, about, about nine months, I mean an interesting kind of gestation period if you like of thinking about it before [husband] decided that that was okay, and that it was all right to go ahead with it.

Drawing on her experience of running workshops, Olivia suggested that women and men tend to...

Drawing on her experience of running workshops, Olivia suggested that women and men tend to...

View topic summary
SHOW TEXT VERSION
PRINT TRANSCRIPT
Well, I do think that men and women approach things differently, largely from a need to connect or a need, not necessarily to connect. Women do seem to have this need to talk with others about issues that are problems that are happening in their lives. They open up to girlfriends and their mothers and their sisters in a way that a man would find completely unnecessary.
Men’s tendency does seem to be, on the whole, and I hate making broad generalisations because there are always exceptions, but on the whole, to want to ponder things internally and/or do absolutely in depth research on the internet. They want to fix it. So they either put things in a box and don’t want to talk about it, and would rather forget about it for the time being, thank you very much. Or they have got to fix it, by finding out how you do it. And they will be the ones to do the in depth internet research.
Sometimes it’s the women who do the in depth research and then inform their partners. I wish, that men would take a more active role and sometimes it’s very clear that they are being led by their women and in a wish to lead a quiet life, thank you very much. They will go along with what their partners say. And it’s often not good for them, because they need to be able to indicate in some way or other what they are really feeling about it. And that may not be by being able to go and see a counsellor or even sit down and talk to with their partner, but may be by, by, I don’t know, by writing, doing a blog. I mean some way for them to be able to get out what their real perspective on it, on it is. So that they are genuine partners in the decision making. And I think very often they are not.
Previous Page
Next Page