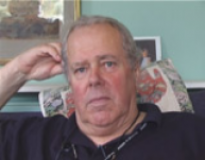 He understood his diagnosis and visualises his heart like a withered hand.

He understood his diagnosis and visualises his heart like a withered hand.

View topic summary
SHOW TEXT VERSION
EMBED CODE
PRINT TRANSCRIPT
It was best explained, actually, by a young registrar because this was, again post the liver transplant thing and this, what's it called, I can't remember the name of it now, cardiomyopathy thing reared it's ugly head and I said, 'Well can you just explain to me exactly what..', and he explained how it can carry on at the sort of same level and that factors which can influence can actually precipitate it into a worse situation or it can, as I said, just carry on at the same level.

And basically, he said, 'It can't get better because the area of muscle in the heart is, I don't think it's destroyed but it just doesn't function properly.'  It's rather, presumably a bit like everything, having a withered hand or something, it just simply doesn't do...it's there but it doesn't do its thing properly and that's what it is. And it's not going to get better hence, as the great man said, 'You can't exercise your way out of this one'. So I mean, I just understood it in terms of a picture and that was it really.

He did not realise he had heart disease until he needed a liver transplant.

He did not realise he had heart disease until he needed a liver transplant.

View topic summary
SHOW TEXT VERSION
EMBED CODE
PRINT TRANSCRIPT
But the point was that the heart thing, the palpitations, the arrhythmia whatever you want to call it, actually seemed to calm down, and the Sotalol that I was given was at one strength and it was doubled and then it was cut back by a bit, so eventually a level was found which seemed to work perfectly well and it sort of faded from the radar screen. As far as I was concerned the more important thing being the liver.

But the interesting thing was that it reappeared in another form in the sense [coughs] that I was told that I would have a transplant, it would be beneficial to have a transplant of my liver, and obviously one gave up drinking completely, which I did for 2 years or more. And that one of the things which they do, fantastically detailed medical examination of you before, you know it's rather like space-men - you know absolutely everything is examined top-to-toe quite literally - and the heart thing came up and I declared it, and said that it hadn't been a problem.

The point I'm trying to make is that the heart keeps creeping in as a... rather like a stage villain, if you like, in that the story is going on but every now and again this shadowy creature creeps in which is the heart. So you don't ever throw it off. It's there, but this time it's becoming quite serious because the option is to have the liver transplant, the other option is to die. So the odds were not, if you like, sort of... 70/30, the odds were more like, worse than 50/50 because of the background of the heart situation, and this history of having conked out in the middle or towards the end of a small, minor operation.

But the point at issue here was firstly, was having to live with the fact that the heart is now a disruptive influence in one's future health. So in other words, the next time I have an operation once again they're going to say, 'Is his heart going to be able to take it?' Equally, I suppose, if I have any form of anaesthetic, 'Is he going to pull through?'

He enjoys the stress of his work but finds everyday hassle stressful.

He enjoys the stress of his work but finds everyday hassle stressful.

View topic summary
SHOW TEXT VERSION
EMBED CODE
PRINT TRANSCRIPT
Deadlines, really are the sort of thing that induce stress. There can be several deadlines all at once which are not of your making, in other words the sort of job I do, is not a straight-line job, it's a circular one that people can approach from any direction at any time without warning. Which I love, I love, that's the sort of life I like, you know I'm not a straight-line thinker, I'm a complete free thinker in that respect so the sort of job I do, I enjoy. 5 different problems on different subjects simultaneously is marvellous, but when they all come together at the same point and one's wife says, 'Don't forget to go to the cleaners, I've got to have my dress by tea-time', that is stress!

Or it can be, or you get to the cleaners but you can't park the car and they've dug up half the car park so there's twice as many cars circulating around, you know the sort of thing?  It happens but that is the sort of thing that, you know you start grinding your teeth and the palpitations can start. But the thing is, is not to do it and you learn not to do that. Before you didn't, one would give free range to one's thing but now you just say 'it doesn't matter'. It's a sort of mantra, 'it doesn't really matter'.

He describes the kind of things that make him have palpitations.

He describes the kind of things that make him have palpitations.

View topic summary
SHOW TEXT VERSION
EMBED CODE
PRINT TRANSCRIPT
I am told, by the great specialist, that I have an extensively irregular heart beat and when I say extensively, as in time. In other words, it's very irregular most of the time, even with the Sotalol. And a few years ago, when I first saw him, I suppose 6 years or whatever it was ago when I first saw him, he told me that... having palpitations meant that the chambers of the heart didn't flush themselves out of blood properly and there was a danger that clots could form and you know, this was an extremely dangerous sort of situation and blah, blah, blah. But he's now told me that the latest research has shown that in fact it doesn't really happen like that and it doesn't really matter, and that having a disorganised heartbeat is not necessarily as bad is it was once thought to be. And frankly, I don't notice it.

And so, it does occasionally, if I get stressed up or somebody irritates me I can feel it going, I can feel wonky behaviour coming on with the heart. And I would also say that, you know if one is discomforted, you know, if it's a very hot day and you're having to stand in the tube train or something (which God forbid one doesn't have to do anymore now) but you would notice it then. The rest of the time I just ignore it. Sometimes you feel it and think wow, and I sort of quickly go like that and say 'Yes, it's still beating, yes!' But it is actually quite irregular.

He wants to know about his medications and consults the British National Formulary.

He wants to know about his medications and consults the British National Formulary.

View topic summary
SHOW TEXT VERSION
EMBED CODE
PRINT TRANSCRIPT
Firstly, I ask questions and I think about it and I decide you know what I really want to know. And secondly, I read up about things. I mean, when I was having my liver illness, for example, I read very extensively on diseases of the liver and cause, effect, you know the biochemistry of it all and etc. etc. If only just because I like to keep an eye on what's going on.

I mean it is fairly unusual, isn't it, to buy your own British National Formulary?

I didn't buy it, it was given to me, but anyhow. I find it fascinating and I'm interested.  You know I read it up and I jolly well check the things I get given, I can assure you.

Do you find, I mean you mentioned you know, you don't want to become morbid about it, I mean some people might say that looking at the BNF is a morbid interest in your condition?

I don't think so. I don't think so. I mean I read 'The Spectator' magazine which is largely based on modern politics and everything, I don't regard that as morbid and I think politicians are the absolute end of the universe, but I still regard it as a thunderingly good read and a good magazine! I mean I don't sit there reading it every day and thumbing through it lovingly like a sort of family Bible or something like that, but I do find it quite interesting.

That's really all it is. It became a bit of a hobby because of all the stuff that was being shoved into me at various times. You know what I mean, what's this one? I mean why do they do that? Why not that one? Oh, I see, the side effects, yes, etc. So you link up all these things.


Encourages people to make the best of their situation and be philosophical.

Encourages people to make the best of their situation and be philosophical.

View topic summary
SHOW TEXT VERSION
EMBED CODE
PRINT TRANSCRIPT
No, I think what it means is it is the things that are happening to you 'it doesn't really matter' because you put them into a perspective that you can handle. And I would just say to people that I'm sure you're feeling pretty down and depressed about it all but that isn't going to help you. And I know it's very difficult but you've actually got to say, 'Well, you know every day you take it on its own and deal with it', and just try and think of the fact that you know, for a start we're very lucky, probably to be alive at this age anyhow because not that many years ago the life expectancy was about 40 (I know this doesn't help people, young people who get heart problems and I can't really relate to that in that sense), but the answer is you've just got to try and face it head-on and say, 'Well, I'm going to make the best of this. And that's it!' - or sit on the sofa and cry your eyes out. I know which I'd rather do.

He says that the various doctors who care for his different health problems are discussing together what to do about his blood clots.

He says that the various doctors who care for his different health problems are discussing together what to do about his blood clots.

View topic summary
SHOW TEXT VERSION
EMBED CODE
PRINT TRANSCRIPT
And at the moment they’re all discussing, heart, liver, haematologists, they’re all discussing why I’m getting these clots and what they’re going to do about it, because one doesn’t want to keep me on warfarin because it is actually quite a dangerous drug, one has suggested we ought to up the warfarin level and take the risk of an internal bleed, etc. and on it goes. So my attitude is basically, look you chaps fight it out and I’ll go along with what the majority decision is. So that’s where we are at the moment.
Previous Page
Next Page