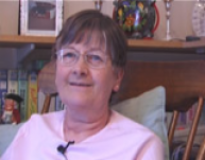 She felt angry at first when she got her diagnosis.

She felt angry at first when she got her diagnosis.

View topic summary
SHOW TEXT VERSION
EMBED CODE
PRINT TRANSCRIPT
No, I wasn't familiar with the term 'heart failure' because it's something that's never crossed my mind.  If it was something to do with sinuses which I was aware about I would have know about it, in fact I do, but because it hadn't ever crossed my mind anything was wrong with my heart at all, I was completely ignorant of all heart aspects, not just heart failure, and I asked them to do an awful lot of explaining, which they did, they were excellent, the cardiologist was brilliant and he gave me a lot of time. He was very very good, and I was extremely upset, I was angry. It was the 'why me' factor isn't it?  Why? I've led a good life, I've worked hard, haven't smoked, haven't drunk, I've got on with everything, I've been widowed for 27 years. Why should this happen to me? I can't understand it. I couldn't understand it. It's taken me more than a year to still too by the way. So he sat down because I was really upset. When I first got told, I was in bed in hospital and the consultant was such a kind man and he sat there and he hugged me for nearly an hour, talking to me. He was absolutely brilliant.

She cannot separate side effects from her actual heart failure.

She cannot separate side effects from her actual heart failure.

View topic summary
SHOW TEXT VERSION
EMBED CODE
PRINT TRANSCRIPT
That's a difficult question to answer, because I'm on a lot of medication, I'm not sure which has got the worse side effect - they've all got awful side effects. I think the reason why my hands go dead so often is because of one particular medication, I'm not going to say which one it is because I might be wrong and I might get into a lot of trouble. I'm not sure, it's hard to separate it from my actual symptoms and condition, I don't think I can answer that very easily. I think the whole thing... the reason I get the nausea even is a mixture of both, without taking that medicine I would be in a lot of trouble, I wouldn't be able to eat my meals half the time and get the medication down me.

Explains how her bi-ventricular pacemaker works but that it is uncomfortable at night.

Explains how her bi-ventricular pacemaker works but that it is uncomfortable at night.

SHOW TEXT VERSION
EMBED CODE
PRINT TRANSCRIPT
So I talked to a consultant again up there. I went to the pre-admission clinic and he said, 'We've decided that if we do the surgical debaulking it still won't pull all the chambers of your heart together, that's the trouble that they're arguing with one an other and you're not pumping proper blood or oxygen. Now your heartbeat has gone down to 36 which is nearly off the scale..so we think that you're better to start with having the new thing and it's called a Medtronic. It's a very new kind of procedure with a new kind of pacemaker and it runs on 3, it works on the left and right vent and the right atrium, and it pulls them together and it is fitted up here. It takes two hours for the procedure, and we feel that's the best option that we can give you, but you'll still be on a lot of medicine'. So that's what I've done and I was there in about 9 or 10 days in January and February.

Now, since I've come home I've found that with the medicine, it's helped a lot, but I was asked how I felt, and I feel like about 40% of what I ever used to be, which is not bad considering I felt less than 10%, so it's given me kind of a new lease of life and you know, you've got to work with these things. You've got to have a go, and they asked me what I'm going to do if they're going to try to do all these things for me because I've still got a surgical option. The size of the Medtronic is quite large. When they tell you about it they say, 'Well it's about the size of a matchbox' and they don't tell you its one of the big old yellow matchboxes! And that way above it, are going to be the terminals the wires that go down through the arteries into your heart are actually covered with oh I don't know, some kind of wiring system, and I can feel them from this scar here. The scar is quite small, they stretch it open to put it in, all very gory (but you don't know about it at the time), but the wires are insulated, the terminals that go down into three chambers of my heart, so but it is bulky, I can feel it.

Also being originally left-handed, I always slept on my left side, I can't sleep on my left side anymore now, because this juts out through the side of my breast. You can't lie on it anymore either and after awhile, sitting back in the chair like I am now, it aches right through to your back. So sleeping, I still sleep upright because I can't get my breath but it's also more comfortable really. Sleeping on my right side's not that comfortable because you're stretching to the side and you can feel it.  It doesn't really move, but you're convinced it is, and you're convinced that you're going to pull the wires out.

She describes what happens at her support group and why she enjoys it.

She describes what happens at her support group and why she enjoys it.

View topic summary
SHOW TEXT VERSION
EMBED CODE
PRINT TRANSCRIPT
When I was in hospital on one of the occasions, I found a leaflet on a stand, and it was about a heart support group for the local hospital, and I phoned them, and that's how I joined that and they're really brilliant, we meet once a month. We have a questions and answers session, they do have medics and nurses who come, but it isn't only about that, it's also about other things, guide dogs for the blind.

Two months ago they had John Woolley who was the little policeman who found the great train robbers, so that brings you into other things as well. But there's about 80, I think there's about 200 people in the group but usually about 80 to 85 go each month, and we have tea and coffee and we all meet together and we all have a bit of moan together. We all ask questions of these professional people, and then we do other things and we arrange social events. We've had 10-pin bowling, I can't do it but I did a bit of scoring for the others as well, it was good. I can't have the wine with the others but I can have my fizzy lemonade with a slice of lemon and some ice in, there's no harm in kidding yourself.

She goes to hospital every 3 months and sees her GP every 8 weeks mainly to talk about her concerns; he is a good listener.

She goes to hospital every 3 months and sees her GP every 8 weeks mainly to talk about her concerns; he is a good listener.

View topic summary
SHOW TEXT VERSION
EMBED CODE
PRINT TRANSCRIPT
I see my GP every 8 weeks now, really to sit and talk to and he's a brilliant listener, and that's set aside from hospital clinic visits. You can't do it without other people even if you think you can.

How often are you going to the hospital clinic?

Every 3 months at the moment, but I do have a hot line if I'm in trouble, I can phone up this number or I can go through the GP so I'm not alone. But I feel I'm coping. I know there's going to be bad times, good times and bad times, it's all been explained to me. I do feel able to cope with it now, but it's taken me quite a few months to come to this decision.

She describes the care and kindness shown by a consultant.

She describes the care and kindness shown by a consultant.

View topic summary
SHOW TEXT VERSION
EMBED CODE
PRINT TRANSCRIPT
He did yes, he said, 'I think that you've had this for a very long time, I think that you've been widowed for a long time and you've been overworking for a great many years, and you've been trying to do too many things. Instead of being lazy you've worked yourself out and your heart's said it's had enough, that's what it actually all comes down to,' and that's what he ended up saying.

What did you feel when you heard that?

I didn't feel anything for a few minutes at all. I was absolutely stunned into silence which is unusual for me. [laughs]  And then it was such a shock that I cried, and I screamed like a banshee for ages and ages, I upset half the other patients, but he was such a wonderful man, he just sat and hugged me for about an hour, and he carried on explaining, and he re-explained the diagrams and things and he said, 'You've got to listen, and you've got to take this on board because it's going to change your life and I need before I go to know that you've really understood this and then when I go, I'm going to get some people to make you a cup of tea and sit with you and they can talk lots and lots with you. Take your time'. So that's how it came about.

Feels she does not need alternative therapies because she gets her support from medical staff and...

Feels she does not need alternative therapies because she gets her support from medical staff and...

View topic summary
SHOW TEXT VERSION
EMBED CODE
PRINT TRANSCRIPT
I've never tried alternative therapies at all. I decided this is quite enough and I didn't feel that it was a suitable thing. Maybe it is for some people, it's not for me. I'm taking the medication, I've had two lots of surgery, there's a third, there's an option for later on. I'm watching my diet, I'm doing what exercises I can I feel I'm coping better mentally now, so that's quite enough to be on board, I don't feel I need to try anything else. I've got people who listen to me, people who help me medically as well, that's enough.
Previous Page
Next Page