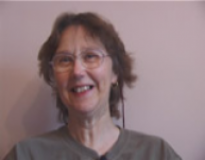 Age at interview: 61
Brief Outline: Interview with a carer, married to man who had a stroke in 2002 and developed heart failure soon afterwards.
Background: Clerical officer; married with 2 children.

Describes how her son and daughter responded differently to their father's illness.

Describes how her son and daughter responded differently to their father's illness.

View topic summary
SHOW TEXT VERSION
EMBED CODE
PRINT TRANSCRIPT
If he plays up, she says, "He's playing up," he gets sort of obnoxious with her or something, and she'll tell him off. She really gets cross and she'll say, "Now listen Dad don't be so stupid,' you know and she puts him straight and he comes, he acts normally then, he doesn't start playing 'oh-woe-is-me' sort of thing because she won't have it.

My son, my son is different, he, he is what, he's a very happy person, he's very happy with his life, and I think it has all been an awful shock for him because he finds it very difficult to come to terms with. He thought that given time, his father would be his normal self, and it's taken him an awful long time to realise that he may not be the same person that he was before. That he will be as he is now, he may stay like that, or he could even get worse. And it's, he's finding it very difficult to come to terms with that. My daughter has actually spoken to my son and explained all this to him, and she said when she does do this, she notices that he wants to cut the conversation, he doesn't want to know it's like a brick wall goes down. So I think my son is having problems at the moment. He's better than he was, and he talks to his dad okay on the phone quite a lot, they come and see him.

Describes how her husband gets anxious whenever she goes out so she takes him with her.

Describes how her husband gets anxious whenever she goes out so she takes him with her.

View topic summary
SHOW TEXT VERSION
EMBED CODE
PRINT TRANSCRIPT
Well that's changed enormously, I mean, well I was very, I was a very spoiled person, [husband] has always allowed me to do my own thing, I've gone to work, I've gone and done, socially I've always gone line-dancing on my own and swimming with my friends, now I can't, that's completely gone, he has to come with me. And I'm trying to get to the bottom of this, and I think it's because, he says it's because he worries about me - example, go to the vets this morning it's only what 10 minutes away, I'm actually away probably 40 minutes and he's worried that something is going to happen to me on the way, and I don't, I don't understand this but he's, I suppose it's his security thing, and I'll give you an example, and it's quite funny really, but I was invited to go and see 'Rocky Horror Show' with my friend and he was horrified when I mentioned this - it's not that long ago, because up to that point he'd come everywhere with me, even line-dancing he sits and watches and whatever. And I said to my friend I don't think he's going to let me go, and she said, 'That's ridiculous, he's got to let you go! Tell him he can come and sit over with my husband and you can come, he'll be looked after,' I said, "I don't think it's him being looked after that worries him it's, he doesn't want me to go without him," but he wouldn't come to the Rocky Horror Show anyway. So she said, "Well you're coming, that's it tell him you're coming." So I thought, 'Mmm...', so I told him I was going and he was horrified, he's still horrified but he said, "Oh well if you have to, you have to." My daughter spoke to him and said, "Dad you've got to let Mum go this is silly." So he said, 'Alright'...

And I came home, we had a wonderful time, and he was okay but he still doesn't like me going off without him. But at least that was one example where he, I suppose I said, "I'm going that's it," it's partly me because I feel mean, if I say "Well I'm going and you're not coming with me," I couldn't do that, my friend doesn't understand that she says, "You should, you should put your foot down," but I can't do it, it's silly but I feel really nasty if I do! So I tend to give in and say, 'Oh come with me then.'

Her daughter told her that she was doing too much for her husband.

Her daughter told her that she was doing too much for her husband.

View topic summary
SHOW TEXT VERSION
EMBED CODE
PRINT TRANSCRIPT
My daughter is very good. She says that I should, a good thing actually and I'm very aware of this she said to me, because he's got into the habit of if he wants a drink of water and I've given him his tablets, he'll say, "My glass is empty," and I've actually gone over and got the glass and come out in the kitchen and filled it up and given it to him, and she saw me one day when she was here one weekend and she said, "Mother, you mustn't do that!" I said, "Why not?" So she said, "Because you're making him an invalid," she says, "He's quite capable of getting up and going to get a glass of water and the more you do that and the more you do things the worse you'll make him." And I thought about it, and I thought she's right, she is.

And now, sometimes I just say, "No, you know where the water is, go and get it." And he gets quite nasty at times, he gets quite cross if I won't do it. But sometimes I don't say anything, I just sit here, and eventually he sort of grabs his glass, storms back to the kitchen gets his glass of water! [laughs]. But... that's one thing you have to be very aware of that you can actually make people worse, by running around after them and doing too much. I think that's almost as bad as, I don't know it's, well you just make them worse, you make them, you will make them an invalid eventually.

Her husband's illness has made her a stronger more positive person.

Her husband's illness has made her a stronger more positive person.

View topic summary
SHOW TEXT VERSION
EMBED CODE
PRINT TRANSCRIPT
And I'm a lot more, whereas before - it's very strange but I used to be very negative - but since all this has happened I've become very positive and I don't know why. It's very strange, because my sister always used to get cross with me and say how negative I was, and yet all of a sudden it's like my personality has changed, it's very weird, and I think it's because I've had to and I think it's silly me sitting around feeling sorry for him and me, you know it's tough, it's life, we've got to get on with it.

And in a way it's made you stronger in a way?

It has actually yes I think it has. And I've got to do it for him anyway, so it's no good, it's no good for him is it?