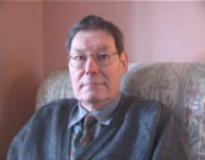 Age at interview: 65
Brief Outline: 3 heart attacks 1978, 1980, 1994. Angina. Ventricular tachycardia, Cannot recall being given a diagnosis of heart failure though he knows he has it.
Background: Retired butcher; married with 2 children.

He believes his heart attack was caused more by stress than smoking.

He believes his heart attack was caused more by stress than smoking.

View topic summary
SHOW TEXT VERSION
EMBED CODE
PRINT TRANSCRIPT
It would have been after that first attack when I was in hospital the first time. After I had the intensive care, initial intensive care treatment when I eventually came around I asked, I think, I presume you know, 'what's happened to me?' and I was told then that yes, I'd had a heart attack [coughs] - excuse me - which comes as quite a shock at my age. And my doctor at the time said 'Oh dear I'm 40, when is it my turn?' People then asked me why I thought I may have had one. I think this differs with everybody but in my opinion, mine was definitely stress.

Going back was the same, led me to the same problem that I had when I first left. My ambition for when I left school was to go into my father's business but I fell out with his partner. Here I was going back into the same business with my father's partner. It lasted two years before, to the best of my knowledge from what people said, I was on the point of a nervous breakdown. I couldn't take it any more and I walked out.

But that stayed with me for quite some time the stress, or the feeling of stress I think I had in trying to keep the business going, to make ends meet because obviously I did go back on a very much lower salary. Still had a family to support, it was difficult. And I think the worry of my parents leaving the way they did when they did, plus the fact of marriage, children of my own, an awful lot went on in a very short space of time. So I think yes, it was stress, I'm not saying that is the case for everybody. It could be smoking too much, whatever, but in my opinion that's what caused mine.

Thinks that amiodarone affected the functioning of his thyroid.

Thinks that amiodarone affected the functioning of his thyroid.

SHOW TEXT VERSION
EMBED CODE
PRINT TRANSCRIPT
The thyroxine, when I mentioned earlier that initially I was put on, when I was first given pills, medication from the hospital, amiodarone was one of the medications that I was given. This subsequently led to a thyroid problem which had only just recently come to be known about and what it, it caused, I think it's the under usage (whatever the right word is and I'm sorry I can't think of it at the moment), of the thyroid.

Now because of, under normal circumstances, if one had this particular problem, nine times out of ten you would either have an operation to take it out (take the thyroid out) or, you would be given a particular medication that kills the thyroid. Because of my heart condition it was decided not to operate. But they wanted to control the thyroid, knowing that it was the amiodarone that had caused it in case at a future time it was needed to put me back on to amiodarone for my heart condition.

He has six follow-up appointments a year with his GP, his consultant and a practice nurse.

He has six follow-up appointments a year with his GP, his consultant and a practice nurse.

View topic summary
SHOW TEXT VERSION
EMBED CODE
PRINT TRANSCRIPT
I see my family doctor probably on average 3 times a year and I see my consultant twice a year. So you can say that 5 times a year I am being monitored. There is then a further once when I see the surgery nurse where we have an annual MOT for people with heart condition who will check my height, weight, what medication I'm on, blood pressure, you name it she will check. As would my family doctor if I was a normal patient without any problems where you may only see your family doctor once every five years then I think your family doctor would say, 'Oh yes we haven't seen your blood pressure for some time, we'd better just take it to make sure its OK'. So effectively I am having 6 screenings a year. Between my family doctor, my consultant and the surgery nurse.

Oh yes, quite definitely I find it very reassuring that I am being monitored as I am even to the extent that I have been told both by my family doctor and my consultant if I have any queries get in touch, that's what they're there for.

Says he gets upset more easily now than before he had heart problems.

Says he gets upset more easily now than before he had heart problems.

View topic summary
SHOW TEXT VERSION
EMBED CODE
PRINT TRANSCRIPT
Another thing is if you're watching a weepy film. I find and have found since my first heart attack tears will come to my eyes very, very easily. But it's nothing to be ashamed of. Some people will say well men shouldn't cry. To hell with it, if you feel like a cry have a cry. It is possibly the best medicine, it'll be better than any of the medication that I'm taking now, to have a cry, get it off your chest and go back to normal.Yes I will cry. I don't very often, I will certainly often have tears in my eyes if something weepy is on television. Particularly shall we say in a children's hospital situation that they're showing at the moment. You see a little baby with a condition that it would be bad enough for an adult to go through, that little baby, consider what that mother is going through, it doesn't bear thinking about. And yet these people do this, they get through it.

But you find you're more affected by that now?

I'm certainly more affected by something of that nature now than I ever was yes. I always used to think that I was the macho man that you know I didn't cry, no I went in head down, knuckles, knuckles to the front. Don't believe it - women are stronger than men!

He chose not to take an alternative medicine that would preserve his libido but be less effective for his heart condition.

He chose not to take an alternative medicine that would preserve his libido but be less effective for his heart condition.

View topic summary
SHOW TEXT VERSION
EMBED CODE
PRINT TRANSCRIPT
Some time back I complained to my GP that my libido had suffered quite dramatically. But, looking back it wasn’t sudden, it had crept up on me, and I suddenly found that I had no interest at all. And my GP - fortunately - looked through all the medical books regarding the medication I was on and wrote me a very nice letter and called me into the surgery to explain the problem that yes, she could possibly put me on different medications for the heart condition that I have, which may improve my libido, ‘But they would not be so efficient in dealing with your heart condition’. So the choice, if you like, was mine, as to whether I wanted one or the other. As far as I was concerned my heart condition was far more serious. One can live with less libido if one likes to put it that way. If you have a loving relationship at home it doesn’t make a bit of difference. If you can have a cuddle at night, great, you have a kiss at night, great, that’s part and parcel of family life.

He says that individuals are free to decide for themselves but he always takes his medication because he trusts his doctors.

He says that individuals are free to decide for themselves but he always takes his medication because he trusts his doctors.

View topic summary
SHOW TEXT VERSION
EMBED CODE
PRINT TRANSCRIPT
Had I ever thought of not taking my medicine? No I don’t think I have because as I mentioned on 2 or 3 occasions the medical profession, the medical people that I’ve been associated with that have helped me, having built up a personal relationship with them, therefore the trust that goes with that I never doubted for one minute that what I was being advised to take was the right thing to take. But having said that, I do feel that if any person on any, who is given any medication to take is perfectly at liberty to use their own minds as to whether to take it or not. But not just not to take it but to ask.

No but I asking, I really want to know what you feel about it. I mean when you had the side effect of loss of libido did it ever occur to you, ‘Right I’m going to stop taking that medicine’?

When, with regarding the libido problem, no I never gave a thought to not taking the medication. Yes I’d been offered alternatives but by the same token I was told they wouldn’t have been as effective as the ones that I’m already on. And no you, there’s no point in going to a solicitor and asking them to draw up a will if you don’t take any notice of it when you’re given it.

No, you go to the medical profession, you take their advice to heart, you do what they suggest – you don’t have to - but yes in my opinion you should. By all means query it as to why, the wherefores.


He sees his GP quite often for problems unrelated to his heart but the GP takes the opportunity to check his blood pressure and his general well-being.

He sees his GP quite often for problems unrelated to his heart but the GP takes the opportunity to check his blood pressure and his general well-being.

View topic summary
SHOW TEXT VERSION
EMBED CODE
PRINT TRANSCRIPT
I can go at any time and quite often I will go for something other than anything to do with my current condition, i.e., I may have a sprained ankle or I’ve got an earache. Nine times out of ten, in fact, no, that is wrong, ten times out of ten, he will check my blood pressure at the same time and ask me how I am generally, as opposed to just the condition that I’ve gone to see him for. Yes he knows me personally. He has been my doctor now for 25 years, he should know me by now, and I think, and I know him.
Previous Page
Next Page