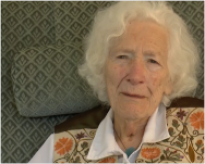 Age at interview: 88
Brief Outline: Cathleen was diagnosed with atrial fibrillation and heart failure 16 months ago. She takes lots of medicines but feels tired. She sees a specialist cardiac nurse at her local hospital every two months, and her GP when necessary. She feels lonely and depressed.
Background: Cathleen is widowed with adult children. Since her husband died she has lived alone in a ground floor flat in a small block. She is a retired teacher and civil servant. Ethnic background: White English.

After struggling to keep up with other people at her Pilates class last year Cathleen went to her doctor and was diagnosed with atrial fibrillation. She was referred to cardiology for tests and, since then, the professionals have been trying to arrive at the right combination of medicines to stabilise her condition. At one point she felt she had no energy and thought she was dying; a course of iron tablets restored her energy levels but she is starting to feel tired again despite blood tests showing she is no longer anaemic. Cathleen was not told face-to-face that in addition to atrial fibrillation she also had ‘heart failure’, but she learned this from copies of letters between the cardiologist and her GP. She worked out for herself that it meant that her heart was getting old, like other bits of her, and was no longer working well.

Since her diagnosis Cathleen has taken warfarin to thin her blood and therefore has regular blood tests to check her clotting time. Diuretics (water pills) have removed a large quantity of fluid from her ankles but have possibly damaged her kidneys as a result. She also takes bisoprolol, spirinolactone, lisinopril, isosorbide mononitrate, digoxin, and a GTN spray for an occasional pain which may be angina or indigestion. All her medicines except the warfarin are organised in a dossette box by a pharmacist, who also delivered them to Cathleen when she wasn’t well enough to collect them. Cathleen alters her warfarin dose herself depending on the result of her clotting time tests. She adjusts the timing of her water tablets to avoid needing the toilet when she is out.

Cathleen sees a specialist cardiac nurse every two months at her local hospital for an hour-long check-up and consultation. She also sees her GP whenever she needs to. She feels very well looked after but guilty that she is taking up NHS resources.

Cathleen has other health problems that predate her heart condition. She was already taking medicines for high blood pressure and a hiatus hernia. She has had both hips replaced and has dislocated one of them several times since. She is seeing a physiotherapist monthly in a bid to prevent further hip dislocations.

Cathleen has given up cycling and driving, so walks or uses buses or taxis to get around, including to her local hospitals. She finds it helpful to use a pair of walking sticks or a shopping trolley as a walking aid when she is out, and has recently realised that she gets a bit breathless when walking. She has twice gone into hospital when feeling unwell, once by ambulance, but on both occasions was sent home after a period of observation. She has prepared an Advanced Decision requesting that she is not resuscitated; the document is kept in a tin in her fridge where it can be readily found by paramedics. She also wears an alarm that she can use to summon help.

Cathleen has little interaction with her neighbours and has gradually had to give up most of the things she used to do in the community; she is feeling increasingly isolated as a result. She would like to move to a friendlier nearby sheltered housing complex but is a long way down the waiting list for a flat there. She sometimes feels depressed, most recently when she got a new computer and an iPad but struggled to make either work. She used to take care of a small area of garden outside her flat but now finds it exhausting. She has lost interest in food now that she has only herself to cater for, and often finds she throws food away because it has gone off.

If Cathleen is going out she delays taking her diuretic until she returns to avoid the inconvenience of needing the toilet.

If Cathleen is going out she delays taking her diuretic until she returns to avoid the inconvenience of needing the toilet.

View topic summary
SHOW TEXT VERSION
EMBED CODE
PRINT TRANSCRIPT
So you’ve got all your medicines in a dosette box [from Boots], so does that mean that you…?

Nearly all except, except there’s warfarin, which I’m allowed to look after myself.

Yeah. So do you ever forget to take them, or is it easy ‘cos they’re in the box?

Very, very seldom, I often don’t take them exactly at noon or whatever, but I don’t think it matters.

And if I don’t take the furosemide immediately before I’m going out, probably if I’m going out early afternoon I tend to take it when I come back.

Would you like to explain, for the purpose of other people watching this, why that is?

Well it is a diuretic, it helps get rid of water, excess water in my legs. And it does it quite quickly after you take them, so it’s awkward to be on the bus into town and needing a toilet very badly. I just try not to do it.

Cathleen wondered whether her anaemia had gone undiagnosed because the GP couldn’t see how pale she was during a telephone appointment.

Cathleen wondered whether her anaemia had gone undiagnosed because the GP couldn’t see how pale she was during a telephone appointment.

View topic summary
SHOW TEXT VERSION
EMBED CODE
PRINT TRANSCRIPT
They have this nice system now that you can’t necessarily see who you want straight away at the surgery, but if you, if you ask, one of the surgeons, one of the doctors will ring you up at the end of his surgery session and give you advice. And that I think is why I hadn’t had my anaemia diagnosed, because I’d been getting advice over the phone and nobody had noticed, and I hadn’t taken any notice of, how pale I had got. So these advances in, which feel very good when it happens, you don’t have to wait, have their bad side as well in a way.
Previous Page
Next Page